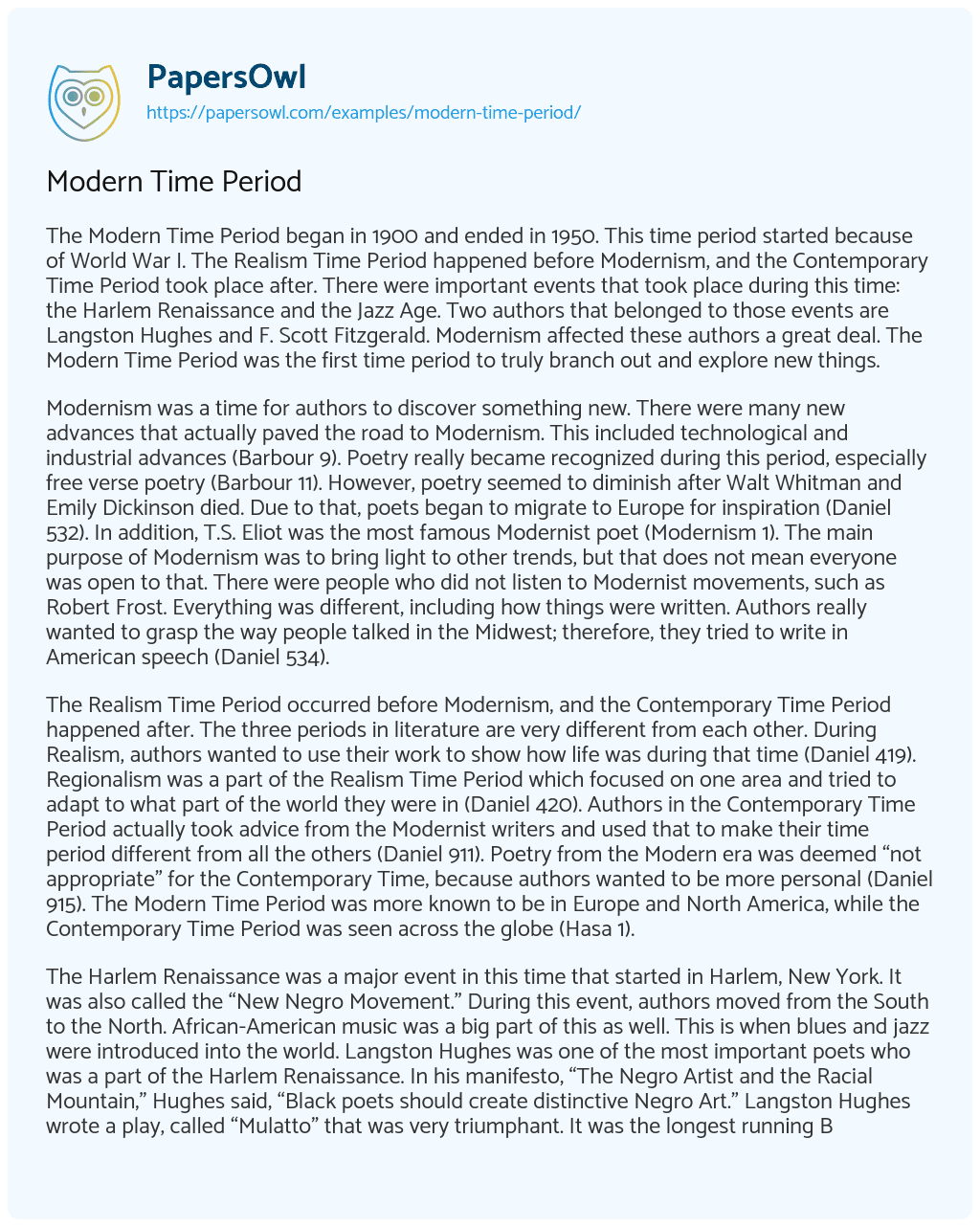 The Modern Time Period began in 1900 and ended in 1950. This time period started because of World War I. The Realism Time Period happened before Modernism, and the Contemporary Time Period took place after. There were important events that took place during this time: the Harlem Renaissance and the Jazz Age. Two authors that belonged to those events are Langston Hughes and F. Scott Fitzgerald. Modernism affected these authors a great deal. The Modern Time Period was the first time period to truly branch out and explore new things.

Modernism was a time for authors to discover something new. There were many new advances that actually paved the road to Modernism. This included technological and industrial advances (Barbour 9). Poetry really became recognized during this period, especially free verse poetry (Barbour 11). However, poetry seemed to diminish after Walt Whitman and Emily Dickinson died. Due to that, poets began to migrate to Europe for inspiration (Daniel 532). In addition, T.S. Eliot was the most famous Modernist poet (Modernism 1). The main purpose of Modernism was to bring light to other trends, but that does not mean everyone was open to that. There were people who did not listen to Modernist movements, such as Robert Frost. Everything was different, including how things were written. Authors really wanted to grasp the way people talked in the Midwest; therefore, they tried to write in American speech (Daniel 534).

The Harlem Renaissance was a major event in this time that started in Harlem, New York. It was also called the “New Negro Movement.” During this event, authors moved from the South to the North. African-American music was a big part of this as well. This is when blues and jazz were introduced into the world. Langston Hughes was one of the most important poets who was a part of the Harlem Renaissance. In his manifesto, “The Negro Artist and the Racial Mountain,” Hughes said, “Black poets should create distinctive Negro Art.” Langston Hughes wrote a play, called “Mulatto” that was very triumphant. It was the longest running Broadway play written by an African-American, which was unheard of at that time (Langston 1). Literary fiction in this movement focused on contemporary life. A huge thing that took place in The Harlem Renaissance was that publishers began welcoming black authors. This movement was extremely important for African-American literary figures (Hutchinson 1, 2).

Another event in the Modern Time Period was the Jazz Age, which is also known as the Roaring 20s. Some people were very wealthy in this age. This is known as a rebellious time during Modernism. Women changed their look and attitudes which allowed them to become known as “Flappers.” Due to this, mothers of Flappers formed the Anti-Flirt League. The Anti-Flirt League expressed their disapproval of their daughter’s actions. Hollywood became huge and people were starting to get famous. Alcohol was also a big thing in this time. Prohibition began in 1920 and lasted until 1933. Prohibition was the banning of consuming and distributing alcohol. Because of that, many people started bootlegging alcohol (Trueman 1). This was also a great time for literature, because one of the most famous novels was published. The Great Gatsby, written by F. Scott Fitzgerald, portrayed how life was in the Jazz Age.

F. Scott Fitzgerald was born on September 24, 1896, in Minnesota. Fitzgerald was named after Francis Scott Key, the author of “The Star-Spangled Banner.” He married Zelda, and the two had one daughter, Frances. He is most known for being an author during the Jazz Age. F. Scott Fitzgerald’s most famous novel was The Great Gatsby, which was about how wealthy and poor people lived during the Jazz Age. He got inspiration for one of the main characters in his book, Daisy Buchanan, from his wife. His first novel was This Side of Paradise, published in 1920 (Mizener 1). The story followed a young man on his journey to adulthood (This 1). Fitzgerald had a very rough life. Zelda was mentally ill and suffered from schizophrenia. He was always broke from paying all of her medical bills. He also never owned a house and almost always owed money to his agent. Due to Zelda’s health issues, Fitzgerald took up drinking. It was said that he drank around thirty-seven beers a day and abused sleeping pills (Barbarese 1). Ironically enough, Zelda and the Jazz Age crashed at the same time. F. Scott Fitzgerald wrote in his ledger, “The Crash! Zelda and America” which was talking about his wife and the stock market crash in 1929 (Hess 1). In the year of 1932, Fitzgerald put Zelda in a sanitarium. Two years later, his most inspirational book, Tender is the Night, was produced. Unfortunately, that novel was unsuccessful (Mizener 1). The book follows Dick Diver as he has an affair with a younger woman and turns into an alcoholic (Tender 1). He became a scriptwriter in 1937 and met a woman named Sheilah Graham. He lived the rest of his life with Graham and continued to visit his beloved Zelda (Mizener 1). F. Scott Fitzgerald started writing The Last Tycoon, which was about Monroe Stahr, a man who lost control of certain aspects of his life (Kuiper 1). However, he did not get to finish it because he died of a heart attack at age forty-four on December 21, 1940 (Mizener 1). The Last Tycoon was edited by Edmund Wilson, a known literary critic (Kuiper 1).

Langston Hughes was a prominent poet from the Modern Time Period. He was born on February 1, 1902, in Missouri. He was most known for being a major figure in the Harlem Renaissance. Hughes mostly wrote poems, but he also wrote novels, plays, and columns (The 1). Langston Hughes was mainly raised by his grandmother, with a little help from his mother. He lived in Lawrence, Kansas with his grandmother, and later moved to Illinois before settling in Ohio with his mother. Hughes was meant to be a poet all his life. When he was in the eighth grade, he was awarded “Class Poet.” After graduating high school, Langston Hughes reconnected with his father, who lived in Mexico. He was travelling to Mexico to talk his father into paying for his education at Columbia University. His father did not support his son’s dreams of being a poet, but was impressed with Hughes’ poetry and agreed to pay for his first year. Langston Hughes wrote “The Negro Speaks of Rivers,” on his way to Mexico (Langston 1). He wrote the poem on the back of an envelope. The poem was written because Hughes said he loved his people and felt that his father hated their people (The 1). In 1921, he enrolled at Columbia University. He won the Opportunity Magazine Poetry Prize in 1925 while working as a busboy. Hughes left his poems with a well known poet, Vachel Lindsay to try to get noticed. The media said that Lindsay “discovered” Langston Hughes. That gave him a platform to continue writing. He enrolled at Lincoln University in Pennsylvania in 1926 and proceeded to write about African-American culture. All throughout his life, Langston Hughes struggled with money. There was never a time where he was financially stable. One day, his dream of owning a house came true. He produced over twenty volumes of poetry (The 1). Langston Hughes died when he was sixty-five years old on May 22, 1967, in New York after having abdominal surgery (Langston 1, The 1). Just like his poetry, his funeral included lots of blues and jazz (Langston 1).

The Modern Time Period affected Langston Hughes and F. Scott Fitzgerald both positively and negatively. For Langston Hughes, it was mostly positive. He became a famous poet, which was a big step for African-Americans. He attended college and made a name for himself. He did not have a lot of money, but he was able to make it out on top and buy himself a house (The 1). However, F. Scott Fitzgerald did not have that much luck in his life. Fitzgerald became reliant on alcohol and pills because dealing with his wife was too much work. He continued to write even during his time with addiction, but never got to finish his last book. His novel, The Great Gatsby, is his most famous novel to date, but it did not receive that much recognition until after his death. Despite being affected negatively by the time period, F. Scott Fitzgerald was still able to write inspiring novels (Barbarese 1, Hess 1).

Black People had no Freedom