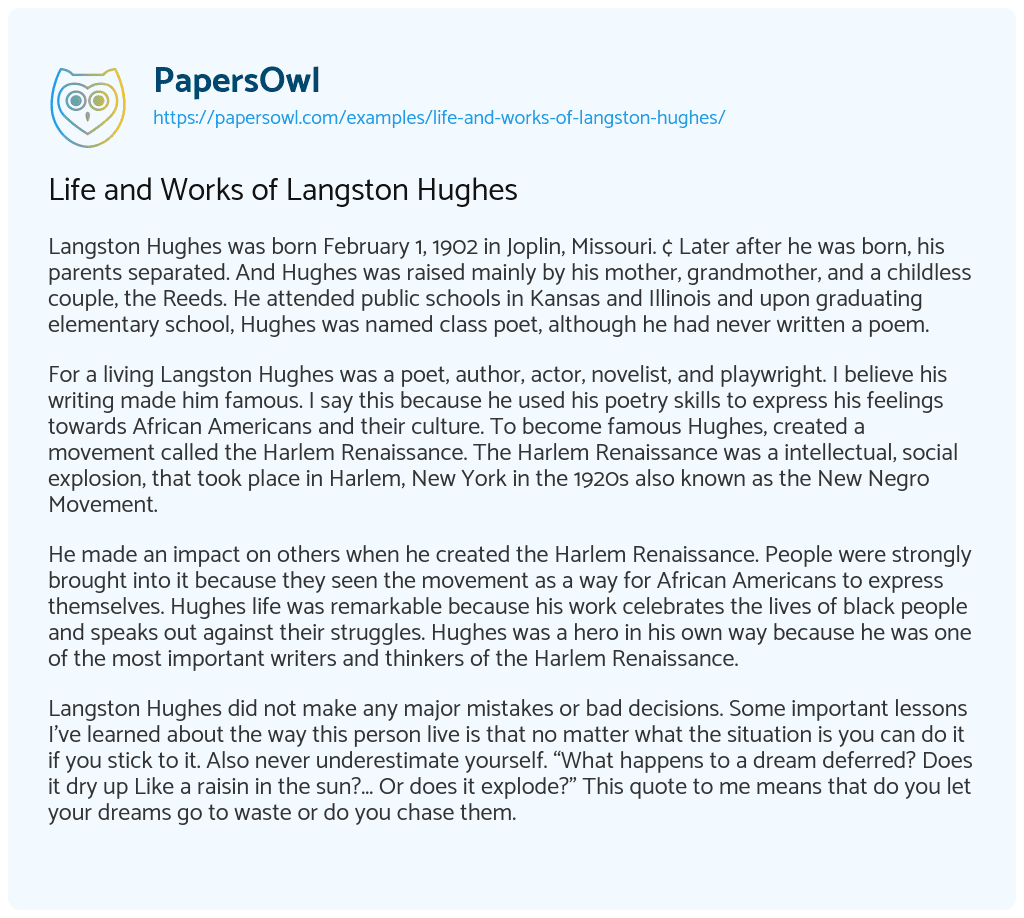 Langston Hughes was born February 1, 1902 in Joplin, Missouri. ¢ Later after he was born, his parents separated. And Hughes was raised mainly by his mother, grandmother, and a childless couple, the Reeds. He attended public schools in Kansas and Illinois and upon graduating elementary school, Hughes was named class poet, although he had never written a poem.

For a living Langston Hughes was a poet, author, actor, novelist, and playwright. I believe his writing made him famous. I say this because he used his poetry skills to express his feelings towards African Americans and their culture. To become famous Hughes, created a movement called the Harlem Renaissance. The Harlem Renaissance was a intellectual, social explosion, that took place in Harlem, New York in the 1920s also known as the New Negro Movement.

He made an impact on others when he created the Harlem Renaissance. People were strongly brought into it because they seen the movement as a way for African Americans to express themselves. Hughes life was remarkable because his work celebrates the lives of black people and speaks out against their struggles. Hughes was a hero in his own way because he was one of the most important writers and thinkers of the Harlem Renaissance.

Langston Hughes did not make any major mistakes or bad decisions. Some important lessons I’ve learned about the way this person live is that no matter what the situation is you can do it if you stick to it. Also never underestimate yourself. “What happens to a dream deferred? Does it dry up Like a raisin in the sun?… Or does it explode?” This quote to me means that do you let your dreams go to waste or do you chase them.

Life and Works of Langston Hughes. (2021, Aug 04). Retrieved from https://papersowl.com/examples/life-and-works-of-langston-hughes/

Comparing and Contrasting the Works of Claude McKay and Langston Hughes