Comparing and Contrasting the Works of Claude McKay and Langston Hughes 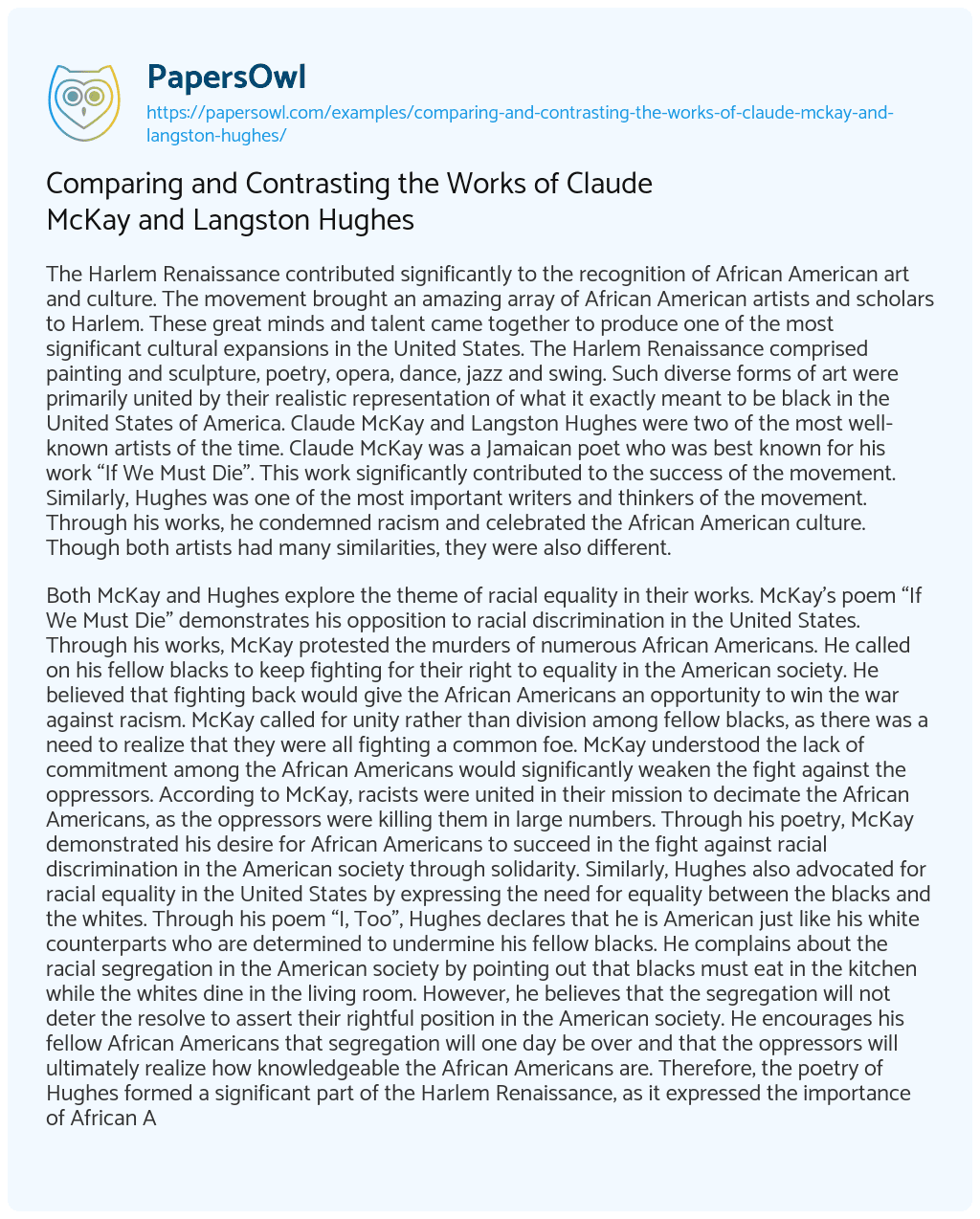 The Harlem Renaissance contributed significantly to the recognition of African American art and culture. The movement brought an amazing array of African American artists and scholars to Harlem. These great minds and talent came together to produce one of the most significant cultural expansions in the United States. The Harlem Renaissance comprised painting and sculpture, poetry, opera, dance, jazz and swing. Such diverse forms of art were primarily united by their realistic representation of what it exactly meant to be black in the United States of America. Claude McKay and Langston Hughes were two of the most well-known artists of the time. Claude McKay was a Jamaican poet who was best known for his work “If We Must Die”. This work significantly contributed to the success of the movement. Similarly, Hughes was one of the most important writers and thinkers of the movement. Through his works, he condemned racism and celebrated the African American culture. Though both artists had many similarities, they were also different.

Both McKay and Hughes explore the theme of racial equality in their works. McKay’s poem “If We Must Die” demonstrates his opposition to racial discrimination in the United States. Through his works, McKay protested the murders of numerous African Americans. He called on his fellow blacks to keep fighting for their right to equality in the American society. He believed that fighting back would give the African Americans an opportunity to win the war against racism. McKay called for unity rather than division among fellow blacks, as there was a need to realize that they were all fighting a common foe. McKay understood the lack of commitment among the African Americans would significantly weaken the fight against the oppressors. According to McKay, racists were united in their mission to decimate the African Americans, as the oppressors were killing them in large numbers. Through his poetry, McKay demonstrated his desire for African Americans to succeed in the fight against racial discrimination in the American society through solidarity. Similarly, Hughes also advocated for racial equality in the United States by expressing the need for equality between the blacks and the whites. Through his poem “I, Too”, Hughes declares that he is American just like his white counterparts who are determined to undermine his fellow blacks. He complains about the racial segregation in the American society by pointing out that blacks must eat in the kitchen while the whites dine in the living room. However, he believes that the segregation will not deter the resolve to assert their rightful position in the American society. He encourages his fellow African Americans that segregation will one day be over and that the oppressors will ultimately realize how knowledgeable the African Americans are. Therefore, the poetry of Hughes formed a significant part of the Harlem Renaissance, as it expressed the importance of African American culture, as well as the need for equality. However, it is important to realize that while Hughes did not want to violently fight for social equality and justice, McKay took a more assertive approach towards the fight against discrimination. He often asked his audience to stand up for what is rightfully theirs, even if it means violence.

The American identity is another dominant theme in the works of both McKay and Hughes. Both authors used the theme to protest how the African Americans were treated in the society at the time. McKay and Hughes believed strongly in themselves and blacks were entitled to the same privileges the whites enjoyed. Through his poetry, McKay strongly advocated for an American society where the blacks and whites are treated equally. He noted that the Africans Americans were considered misfits by the majority white race. Apart from confirming the uniqueness of the African American culture, McKay sought to achieve acceptance by the majority white culture. He believed that African Americans would eventually be regarded American if they united for the cause. Through his aggressive approach to the fight for equality in the American society, he urged his fellow blacks to stand for what they believed belonged to them. In his view, blacks and whites were American and that the social construct of racism drew a line of hate between them. To some extent, Hughes agreed with McKay because he also insisted that the African Americans are also part of the larger American culture. In his poem “I, Too”, Hughes refers to himself as the darker brother, implying that he was just a Black American. He suggests that the black and the white Americans share a lot in common despite the difference in skin complexion. Although Hughes did not know exactly when African Americans will be treated as equals, he was convinced that the darker brothers will one be united with their white brothers, the rest of the Americans. Besides, Hughes asserts that the whites will soon realize that the African Americans are indeed the same as themselves and then become ashamed. Through his expressive poem, “I, Too”, Hughes is optimistic that every American will regret the awful history involving the African Americans in the United States. Despite the similarities between the works of the two Harlem Renaissance’s poets, there also exist some stark contrasts.

It is easy to notice a huge difference between the writing style and the main subject matter in comparing McKay’s and Hughes’ poems. McKay seems to stick to a perfect sonnet form, as he expresses his ideas in to a confined language His sonnets exhibit a deep sense of confusion over his identity within a diverse American culture. Apparently, he stuck to the sonnet form in order to allow his poetry to be understood by other poets, including white poets. Essentially most of his poems talked about his racial identity against the already established racial identity known in the United States. As such, he sought to compare his blackness to America’s whiteness. As a result, McKay has been criticized for failing to break away from the racial confines set by the whites. On the contrary, Hughes uses no set poetic style or structure and he does not compare his racial identity to that of someone else. Generally, Hughes speaks of himself as encompassing the entire race of African Americans. Besides, he does not put his race in comparison to another race. As such, Hughes seeks to break away from the established confines by not limiting the style of his poetry to already set rules or comparing his racial identity to another one. Through his poetry, Hughes succeeds in capturing the pride and strength of the African American culture. His poems established a foundation on which the cultural explosion would take off. The lack of a definite style helped Hughes to freely and openly express his identity within the phenomenal African American culture.

Comparing and Contrasting the Works of Claude McKay and Langston Hughes. (2021, Mar 20). Retrieved from https://papersowl.com/examples/comparing-and-contrasting-the-works-of-claude-mckay-and-langston-hughes/

The Effects of Langston Hughes in the Harlem Renaissance