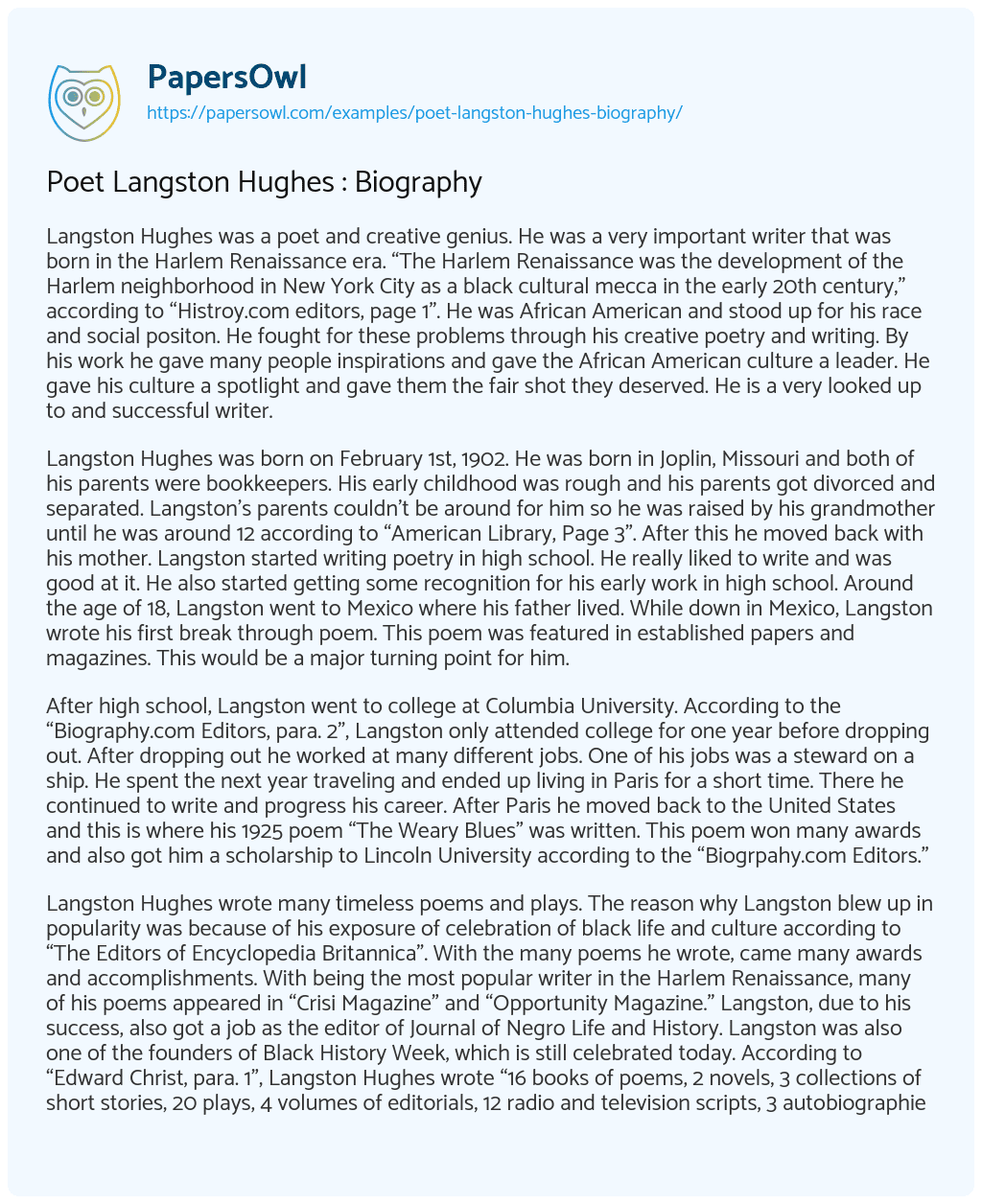 Langston Hughes was a poet and creative genius. He was a very important writer that was born in the Harlem Renaissance era. “The Harlem Renaissance was the development of the Harlem neighborhood in New York City as a black cultural mecca in the early 20th century,” according to “Histroy.com editors, page 1”. He was African American and stood up for his race and social positon. He fought for these problems through his creative poetry and writing. By his work he gave many people inspirations and gave the African American culture a leader. He gave his culture a spotlight and gave them the fair shot they deserved. He is a very looked up to and successful writer.

Langston Hughes was born on February 1st, 1902. He was born in Joplin, Missouri and both of his parents were bookkeepers. His early childhood was rough and his parents got divorced and separated. Langston’s parents couldn’t be around for him so he was raised by his grandmother until he was around 12 according to “American Library, Page 3”. After this he moved back with his mother. Langston started writing poetry in high school. He really liked to write and was good at it. He also started getting some recognition for his early work in high school. Around the age of 18, Langston went to Mexico where his father lived. While down in Mexico, Langston wrote his first break through poem. This poem was featured in established papers and magazines. This would be a major turning point for him.

After high school, Langston went to college at Columbia University. According to the “Biography.com Editors, para. 2”, Langston only attended college for one year before dropping out. After dropping out he worked at many different jobs. One of his jobs was a steward on a ship. He spent the next year traveling and ended up living in Paris for a short time. There he continued to write and progress his career. After Paris he moved back to the United States and this is where his 1925 poem “The Weary Blues” was written. This poem won many awards and also got him a scholarship to Lincoln University according to the “Biogrpahy.com Editors.”

Langston Hughes wrote many timeless poems and plays. The reason why Langston blew up in popularity was because of his exposure of celebration of black life and culture according to “The Editors of Encyclopedia Britannica”. With the many poems he wrote, came many awards and accomplishments. With being the most popular writer in the Harlem Renaissance, many of his poems appeared in “Crisi Magazine” and “Opportunity Magazine.” Langston, due to his success, also got a job as the editor of Journal of Negro Life and History. Langston was also one of the founders of Black History Week, which is still celebrated today. According to “Edward Christ, para. 1”, Langston Hughes wrote “16 books of poems, 2 novels, 3 collections of short stories, 20 plays, 4 volumes of editorials, 12 radio and television scripts, 3 autobiographies, and dozens of magazine articles.”

Langston had problems with prostate cancer and died on May 22nd, 1967 according to “Poets.org, para. 5”. He died in New York City at the age of 65. The street he lived on was renamed in his memory “Langston Hughes Place.” Langston’s ashes are also buried below a floor medallion at the Schomburg Center. This center does research for black culture. Langston’s work relates very heavily to this organization because Langston also fought and gave light to black culture. Langston, through his work and dedication, is still looked upon and celebrated by not just the black community, but also every aspiring writer.

In conclusion, Langston was a very influential and important writer. He gave hope, dreams, and light to black culture and will be remembered for ages to come. His work was different than everybody else’s during the time period and he really made the Harlem Renaissance a time period to remember. Many organizations and things he has created will be used and celebrated for a long time. Even during the early 1900’s, which is a difficult time period for African Americans, he still took on the challenge of becoming a black writer. He stood up for his people, his race, and black social position.