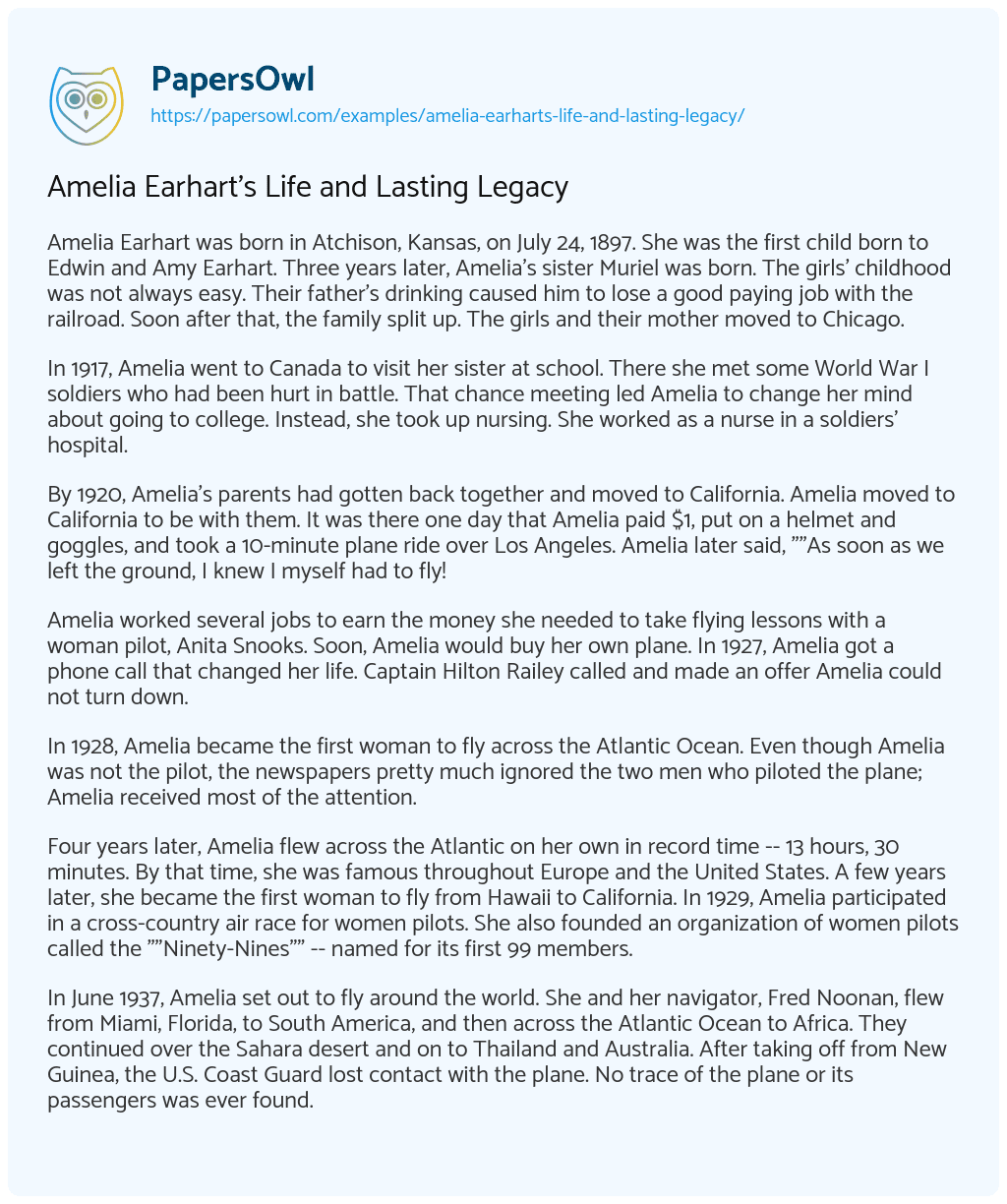 Amelia Earhart was born in Atchison, Kansas, on July 24, 1897. She was the first child born to Edwin and Amy Earhart. Three years later, Amelia’s sister Muriel was born. The girls’ childhood was not always easy. Their father’s drinking caused him to lose a good paying job with the railroad. Soon after that, the family split up. The girls and their mother moved to Chicago.

In 1917, Amelia went to Canada to visit her sister at school. There she met some World War I soldiers who had been hurt in battle. That chance meeting led Amelia to change her mind about going to college. Instead, she took up nursing. She worked as a nurse in a soldiers’ hospital.

By 1920, Amelia’s parents had gotten back together and moved to California. Amelia moved to California to be with them. It was there one day that Amelia paid $1, put on a helmet and goggles, and took a 10-minute plane ride over Los Angeles. Amelia later said, “”As soon as we left the ground, I knew I myself had to fly!

Amelia worked several jobs to earn the money she needed to take flying lessons with a woman pilot, Anita Snooks. Soon, Amelia would buy her own plane. In 1927, Amelia got a phone call that changed her life. Captain Hilton Railey called and made an offer Amelia could not turn down.

In 1928, Amelia became the first woman to fly across the Atlantic Ocean. Even though Amelia was not the pilot, the newspapers pretty much ignored the two men who piloted the plane; Amelia received most of the attention.

Four years later, Amelia flew across the Atlantic on her own in record time — 13 hours, 30 minutes. By that time, she was famous throughout Europe and the United States. A few years later, she became the first woman to fly from Hawaii to California. In 1929, Amelia participated in a cross-country air race for women pilots. She also founded an organization of women pilots called the “”Ninety-Nines”” — named for its first 99 members.

In June 1937, Amelia set out to fly around the world. She and her navigator, Fred Noonan, flew from Miami, Florida, to South America, and then across the Atlantic Ocean to Africa. They continued over the Sahara desert and on to Thailand and Australia. After taking off from New Guinea, the U.S. Coast Guard lost contact with the plane. No trace of the plane or its passengers was ever found.