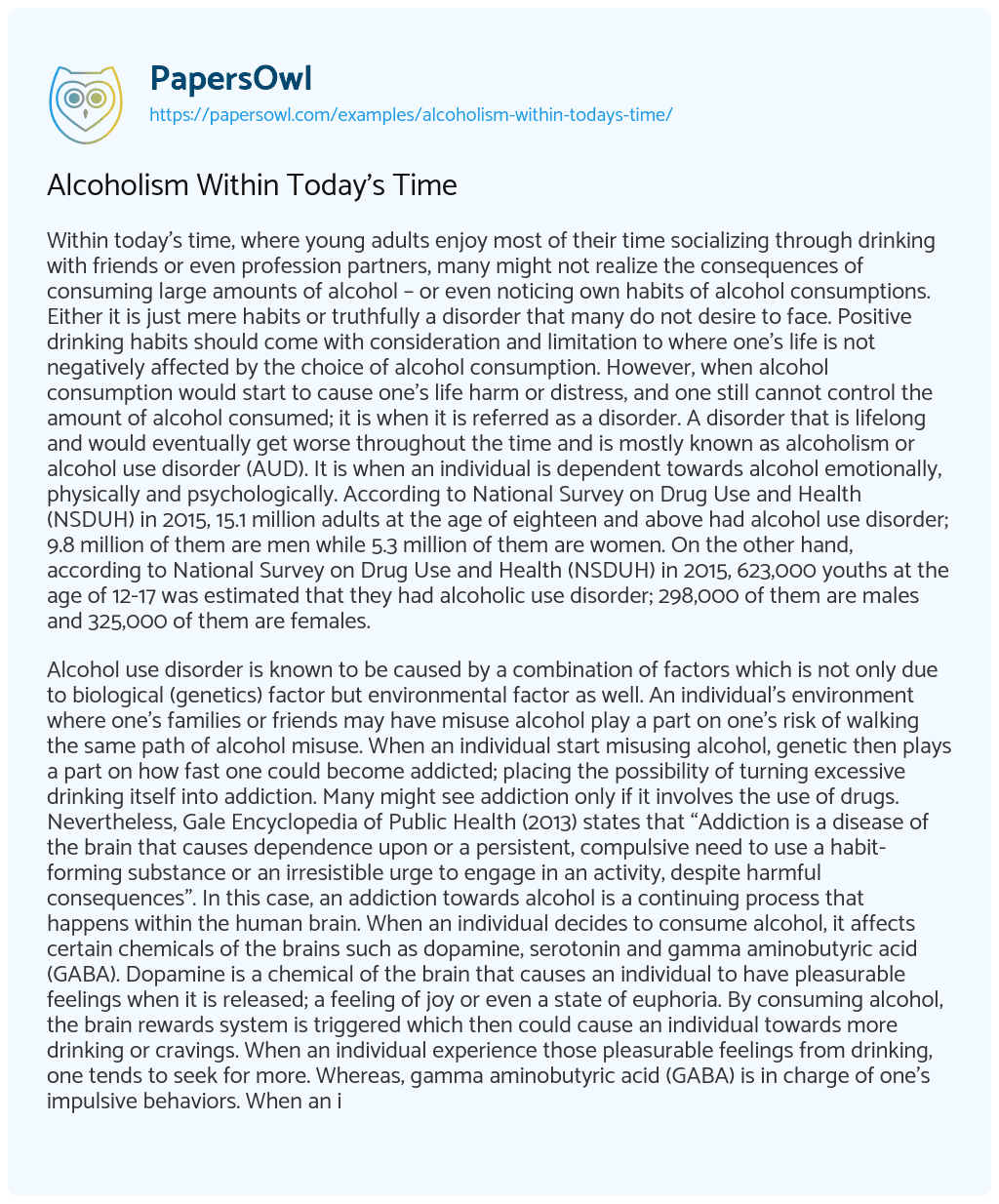 Within today’s time, where young adults enjoy most of their time socializing through drinking with friends or even profession partners, many might not realize the consequences of consuming large amounts of alcohol – or even noticing own habits of alcohol consumptions. Either it is just mere habits or truthfully a disorder that many do not desire to face. Positive drinking habits should come with consideration and limitation to where one’s life is not negatively affected by the choice of alcohol consumption. However, when alcohol consumption would start to cause one’s life harm or distress, and one still cannot control the amount of alcohol consumed; it is when it is referred as a disorder. A disorder that is lifelong and would eventually get worse throughout the time and is mostly known as alcoholism or alcohol use disorder (AUD). It is when an individual is dependent towards alcohol emotionally, physically and psychologically. According to National Survey on Drug Use and Health (NSDUH) in 2015, 15.1 million adults at the age of eighteen and above had alcohol use disorder; 9.8 million of them are men while 5.3 million of them are women. On the other hand, according to National Survey on Drug Use and Health (NSDUH) in 2015, 623,000 youths at the age of 12-17 was estimated that they had alcoholic use disorder; 298,000 of them are males and 325,000 of them are females.

Alcohol use disorder is known to be caused by a combination of factors which is not only due to biological (genetics) factor but environmental factor as well. An individual’s environment where one’s families or friends may have misuse alcohol play a part on one’s risk of walking the same path of alcohol misuse. When an individual start misusing alcohol, genetic then plays a part on how fast one could become addicted; placing the possibility of turning excessive drinking itself into addiction. Many might see addiction only if it involves the use of drugs. Nevertheless, Gale Encyclopedia of Public Health (2013) states that “Addiction is a disease of the brain that causes dependence upon or a persistent, compulsive need to use a habit-forming substance or an irresistible urge to engage in an activity, despite harmful consequences”. In this case, an addiction towards alcohol is a continuing process that happens within the human brain. When an individual decides to consume alcohol, it affects certain chemicals of the brains such as dopamine, serotonin and gamma aminobutyric acid (GABA). Dopamine is a chemical of the brain that causes an individual to have pleasurable feelings when it is released; a feeling of joy or even a state of euphoria. By consuming alcohol, the brain rewards system is triggered which then could cause an individual towards more drinking or cravings. When an individual experience those pleasurable feelings from drinking, one tends to seek for more. Whereas, gamma aminobutyric acid (GABA) is in charge of one’s impulsive behaviors. When an individual consumes alcohol, it alters the production of GABA that would then cause impulse behaviors and the reduced awareness of one’s own actions.

Other than the brain itself, alcohol takes a toll on the human body whether it is short term or long term. The liver is one of our body parts that would be most likely to be affected from alcohol consumption – due to its purpose of breaking down alcohol. However, even if alcohol is still capable of being broken down, the liver can only process one serving of alcohol per hour. If an individual decides to drink more than one serving of alcohol in an hour, the alcohol that should be broken down will then be stored in the blood stream as well as the body tissues instead; until the alcohol can be broken down. Heavy and/or long-term drinking would place the liver in intense work that would then cause scarring on the liver, fat build-ups and chronic inflammation. Additionally, the Harvard Medical School Topics (A-Z) (2017) mentions that “Alcohol use disorder increases the risk of liver disease (hepatitis and cirrhosis), heart disease, stomach ulcers, brain damage, stroke and other health problems”. It is truly shown that long-term and/or heavy consumption of alcohol would cause a lot of damages towards one’s body.

Furthermore, individual who goes through alcohol use disorder is affected on how one functions and acts in real life. Individual might start to miss work days or have poor performance at work, gives up on hobbies, starts committing violent crimes or instead becomes a victim of a crime and even possibly hurt one’s relationship between friends and families. Individual might start using physical actions towards loved ones during alcohol consumption. Based on World Health Organization (2006) on Child Maltreatment and Alcohol, it is mentioned that “Alcohol is a significant contributory factor to child maltreatment, and many shows that being maltreated as a child is associated with marked increases in the risk of hazardous or harmful drinking in later life” (p.1). As for the statistics given by the World Health Organization (2006), 35% of offenders of parental child abuse in the United states, had consumed either alcohol or drugs at the time of the incident (World Health Organization, 2006, p.3).

Likewise, a family that consist of an alcoholic individual will have roles of their own. Based on Wegscheider-Cruise’s family roles, there are six roles. The first one would be the dependent which would be the alcoholic individual. The enabler which would be the one who help and protect the dependent. The hero who do well in everything in order to get attention away from the alcoholic; and usually is the oldest child. The scapegoat, the one who would make problems and creates more concern in the family; known as a delinquent in the family. The lost child who will rarely be present when there is a fight or an argument; placing self into isolation. Lastly, the mascot, the one who uses humor as an escape; lightening the tensions in the family with jokes or by “clowning around”.

Alcoholism might be a common disorder though not easy for one to realize or family and friends to take actions on. Hence, screening is truly important. Individual could go to their family doctor, physicians or even have one’s family and friends do the screening/questionnaires. One of the examples of the screening would be the (CAGE) questionnaires – which includes the cut, annoyed, guilty and eye opener as the main highlight. Another example questionnaire would be the 10 question AUDIT (Alcohol Use Disorder Identification Test) created by the World Health Organization. Without going through screening and self-realization, an individual with alcoholism would less likely be able/want to get help or treatments. Treatments may vary from self-help groups, support groups, therapy, counseling, alcohol detoxification, or inpatient rehabilitation facility program – depending on what’s suitable for the alcoholic individual. However, what most important is for family members and friends to remember that alcoholism is an illness and it is not based on poor character or someone’s worthiness.