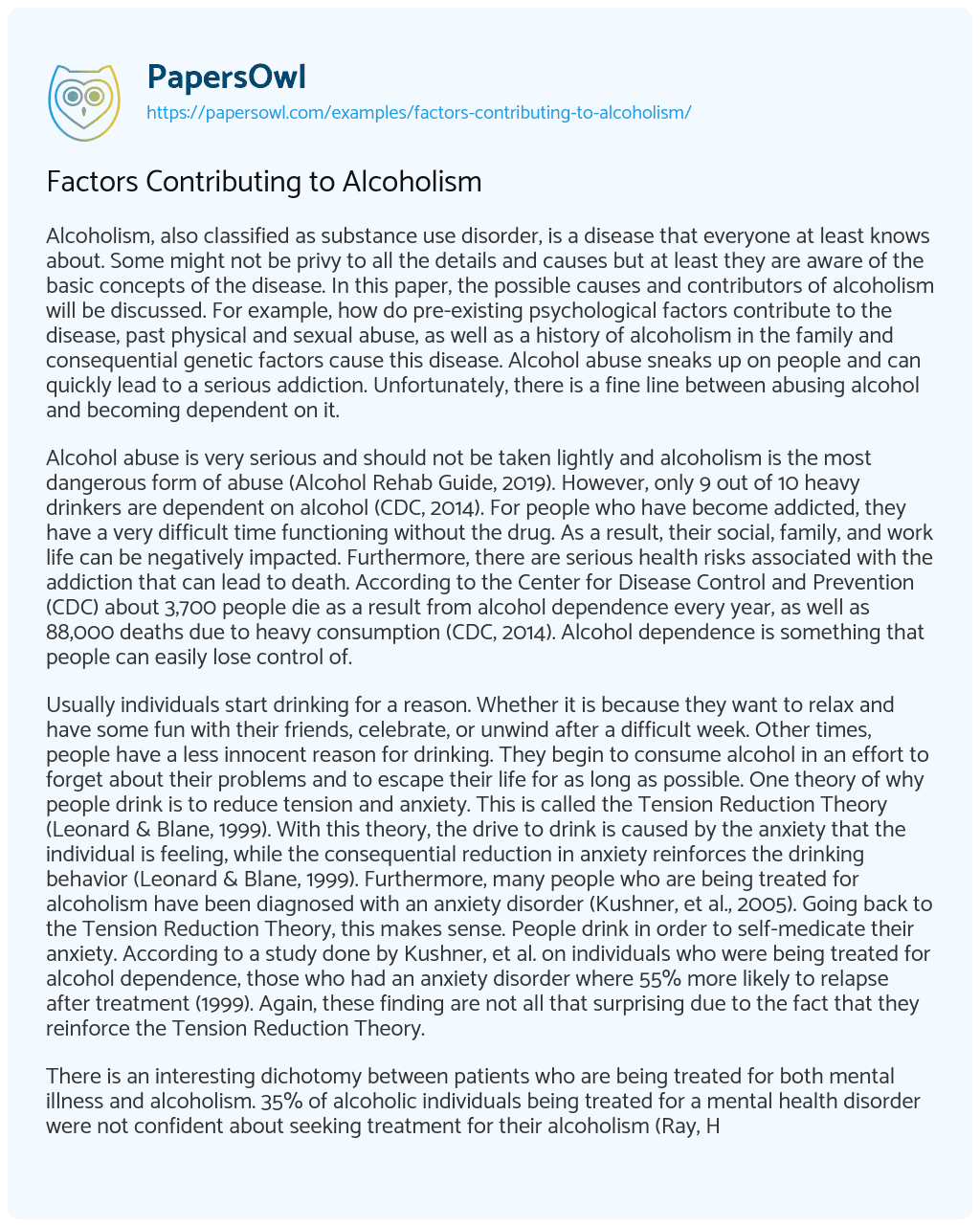 Alcoholism, also classified as substance use disorder, is a disease that everyone at least knows about. Some might not be privy to all the details and causes but at least they are aware of the basic concepts of the disease. In this paper, the possible causes and contributors of alcoholism will be discussed. For example, how do pre-existing psychological factors contribute to the disease, past physical and sexual abuse, as well as a history of alcoholism in the family and consequential genetic factors cause this disease. Alcohol abuse sneaks up on people and can quickly lead to a serious addiction. Unfortunately, there is a fine line between abusing alcohol and becoming dependent on it.

Alcohol abuse is very serious and should not be taken lightly and alcoholism is the most dangerous form of abuse (Alcohol Rehab Guide, 2019). However, only 9 out of 10 heavy drinkers are dependent on alcohol (CDC, 2014). For people who have become addicted, they have a very difficult time functioning without the drug. As a result, their social, family, and work life can be negatively impacted. Furthermore, there are serious health risks associated with the addiction that can lead to death. According to the Center for Disease Control and Prevention (CDC) about 3,700 people die as a result from alcohol dependence every year, as well as 88,000 deaths due to heavy consumption (CDC, 2014). Alcohol dependence is something that people can easily lose control of.

Usually individuals start drinking for a reason. Whether it is because they want to relax and have some fun with their friends, celebrate, or unwind after a difficult week. Other times, people have a less innocent reason for drinking. They begin to consume alcohol in an effort to forget about their problems and to escape their life for as long as possible. One theory of why people drink is to reduce tension and anxiety. This is called the Tension Reduction Theory (Leonard & Blane, 1999). With this theory, the drive to drink is caused by the anxiety that the individual is feeling, while the consequential reduction in anxiety reinforces the drinking behavior (Leonard & Blane, 1999). Furthermore, many people who are being treated for alcoholism have been diagnosed with an anxiety disorder (Kushner, et al., 2005). Going back to the Tension Reduction Theory, this makes sense. People drink in order to self-medicate their anxiety. According to a study done by Kushner, et al. on individuals who were being treated for alcohol dependence, those who had an anxiety disorder where 55% more likely to relapse after treatment (1999). Again, these finding are not all that surprising due to the fact that they reinforce the Tension Reduction Theory.

There is an interesting dichotomy between patients who are being treated for both mental illness and alcoholism. 35% of alcoholic individuals being treated for a mental health disorder were not confident about seeking treatment for their alcoholism (Ray, Hart, Chelminski, Young, & Zimmerman, 2011). Alcoholism treatment is not something that is widely talked about. Many people are still unsure as to what treatment means. Some may think about the popular show called Intervention that is usually on A&E, or they think about months of rehab. Sometimes, treatment is as simple as going into counseling or attending Alcoholics Anonymous (AA) meetings. That being said, many alcoholics who know about AA and it’s 12 step programs, think that the program is unhelpful, unsympathetic, and alienating (Noordsy, Schwab, Fox, & Drake, 1996).

Even though there are several self-help ways for people to sober up and remain sober, many need help. Depending on the severity of the dependence, most addicts need medical attention due to the severe side effects of the withdrawals. At times, alcohol withdrawals can be life threatening. However, the self-help approach is not effective for many individuals and some need personalized therapy from practiced professionals.

Just as it may come as no surprise that anxiety contributes to alcoholism, so does a person’s past experiences. A child or adult who has experienced physical, mental, and or sexual abuse is more likely to suffer from future trauma in the form of substance abuse. A study on incarcerated young women aged 12-18 years old, claimed that sexual abuse that happened within the last year increased the abuse of alcohol, marijuana, and other illegal drugs (Rich, Wilson, & Robertson, 2016). Furthermore, in women, past emotional abuse, sexual abuse, and neglect led to alcohol abuse at a very young age. Men who were emotionally abused also led to a younger age of substance abuse (Rich, Wilson, & Robertson, 2016). Although these findings are very upsetting, it is not all that surprising. As it was previously explained, these individuals experienced a lot of trauma and as a result they tried to seek some sort of escape. Unfortunately, they sought help in the form of self-medication via drugs and alcohol.

Obviously, physical abuse and alcohol abuse are very closely linked together. Kunitz, Levy, McCloskey, & Gabriel claim that physical and sexual abuse are a serious risk factor with conduct problems (1998). Specifically, physical abuse is an even bigger precursor for future alcohol abuse. Also, domestic violence has been closely linked with alcohol abuse in both the aggressor and the victim (Kunitz, Levy, McCloskey, & Gabriel, 1998). This is a very difficult situation to be in. A bit of a conundrum really. Some children are starting out their young lives by living a life of abuse. As a result, these children are becoming adolescents who are turning to alcohol to solve their problems. The substance abuse then leads them to a life of future physical and mental abuse in the form of domestic violence. Then, if these people have children of their own it puts those young kids at risk as well. The cycle just keeps repeating itself. Obviously, not every case of physical and sexual abuse leads to these results but even one case is too many.

Now that we know how the environment effects alcohol abuse, it is time to look at the genetic factors involved in the disease. There is a lot of evidence that suggests that even though alcoholism is not necessarily a guaranteed inheritance, there are genes that can increase the risk of substance abuse. Even though the entire human genome has been mapped out there has not been a lot of research on alcohol abuse and what genes contribute. The Collaborative Study on the Genetics of Alcoholism (COGA) is a study that was done on families to try and identify these genetic characteristics (Edenberg & Forud, 2006).

It is very important to continue studying genes in hopes of finding genetic variations that can lead to alcoholism. Alcoholism is very serious and as previously stated, it can begin to sneak up on people. If individuals knew that they were more likely to become dependent on alcohol simply because of their DNA then maybe they would be more careful about how much they drink. However, genetics don’t necessarily mean a person is doomed to become an alcoholic. There has been a long-standing debate on nature versus nurture and it can be applied to substance abuse. As previously stated, a person’s past can seriously influence how they live the rest of their life. That would be the nurture perspective. The nature perspective would come directly the genetic influence from their DNA. More than likely, the reason why a person becomes alcohol dependent, would come from both their nature and how they have lived their life.

So far, pre-existing psychological condition, past abuse, and genetic factors have shed some light on to why people become dependent on alcohol. Alcoholism is still a tricky subject because some people do not agree that it is a disease because they think it is a choice. Whereas others believe that it is a chronic disease that will have to be battled for the rest of their life. The situation is not being made easier to understand due to differences in treatment methods. Some people have great success using self-help methods and other people need serious medical and psychological intervention. It is difficult to predict what treatment method will help a person overcome their addiction. It is just extremely important to take into account previous mental illness, childhood experiences, and genetic predisposition to dependence. Only then can scientists, substance abuse counselors, social services, and researchers begin to understand how deeply this addiction can affect people.

Factors Contributing to Alcoholism. (2021, May 14). Retrieved from https://papersowl.com/examples/factors-contributing-to-alcoholism/