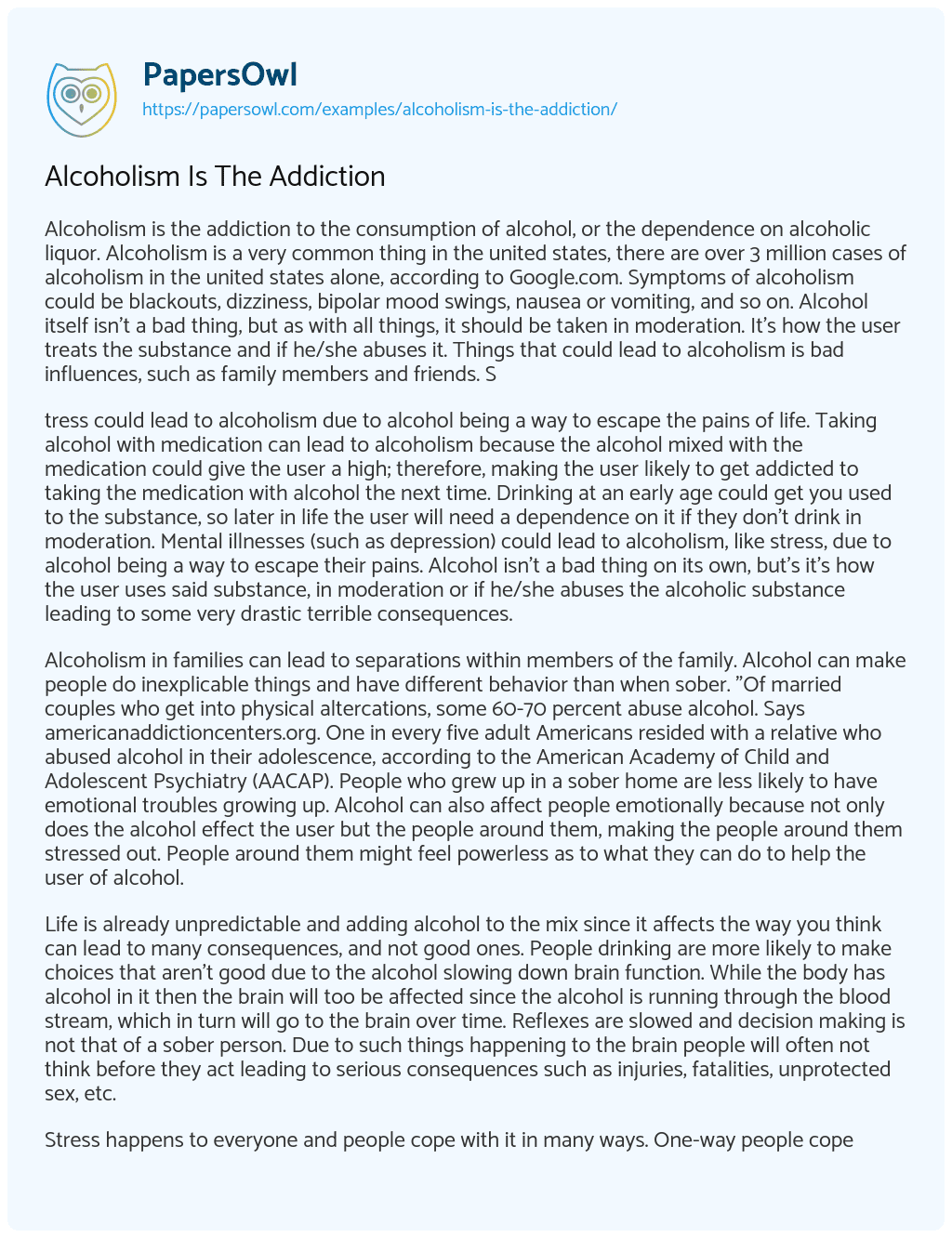 Alcoholism is the addiction to the consumption of alcohol, or the dependence on alcoholic liquor. Alcoholism is a very common thing in the united states, there are over 3 million cases of alcoholism in the united states alone, according to Google.com. Symptoms of alcoholism could be blackouts, dizziness, bipolar mood swings, nausea or vomiting, and so on. Alcohol itself isn’t a bad thing, but as with all things, it should be taken in moderation. It’s how the user treats the substance and if he/she abuses it. Things that could lead to alcoholism is bad influences, such as family members and friends. S

tress could lead to alcoholism due to alcohol being a way to escape the pains of life. Taking alcohol with medication can lead to alcoholism because the alcohol mixed with the medication could give the user a high; therefore, making the user likely to get addicted to taking the medication with alcohol the next time. Drinking at an early age could get you used to the substance, so later in life the user will need a dependence on it if they don’t drink in moderation. Mental illnesses (such as depression) could lead to alcoholism, like stress, due to alcohol being a way to escape their pains. Alcohol isn’t a bad thing on its own, but’s it’s how the user uses said substance, in moderation or if he/she abuses the alcoholic substance leading to some very drastic terrible consequences.

Alcoholism in families can lead to separations within members of the family. Alcohol can make people do inexplicable things and have different behavior than when sober. “Of married couples who get into physical altercations, some 60-70 percent abuse alcohol. Says americanaddictioncenters.org. One in every five adult Americans resided with a relative who abused alcohol in their adolescence, according to the American Academy of Child and Adolescent Psychiatry (AACAP). People who grew up in a sober home are less likely to have emotional troubles growing up. Alcohol can also affect people emotionally because not only does the alcohol effect the user but the people around them, making the people around them stressed out. People around them might feel powerless as to what they can do to help the user of alcohol.

Life is already unpredictable and adding alcohol to the mix since it affects the way you think can lead to many consequences, and not good ones. People drinking are more likely to make choices that aren’t good due to the alcohol slowing down brain function. While the body has alcohol in it then the brain will too be affected since the alcohol is running through the blood stream, which in turn will go to the brain over time. Reflexes are slowed and decision making is not that of a sober person. Due to such things happening to the brain people will often not think before they act leading to serious consequences such as injuries, fatalities, unprotected sex, etc.

Stress happens to everyone and people cope with it in many ways. One-way people cope with their stress is alcohol. Now drinking alcohol in moderation is fine but once you start abusing the substance it takes a whole other turn. Drinking alcohol shouldn’t be your first instinct to cope with stress, but rather go to talk to someone. Once your body gets used to the frequent heavy drinking it causes the body to depend on the substance, according to the National Institute on Alcohol Abuse and Alcoholism.

Researchers found that people who tended to have higher stress levels tended to drink more often than people with low stress levels, according to the National Institute on Alcohol Abuse and Alcoholism, and that men were more likely to turn to drinking than women. Since stress can be very hard in people’s lives they will turn to alcohol since it slows down brain function and gives them a way to escape their pains in the world. More often than not it could lead to excessive drinking which in turn leads to alcohol abuse which leads to really bad decision making and can hurt people physically and mentally. It could leave the stressed person feeling worse in time. The effects won’t happen immediately but in time the effects will kick in making the user, more likely than not, worse than how they went in. Alcohol abuse could lead to making bad decisions which could hurt the people around them and especially themselves. For example if someone is say stressed about their job and goes out for a night of heavy drinking and then decides to drive their car home, they can end up hurting both themselves and someone else, since the brain is affected by the alcohol which leads to slower reflexes and slower cognitive function, the user won’t be able to make the smartest decisions on the road as if they were sober.

Taking alcohol with medication is really dangerous due to the fact that it can be fatal if you mix alcohol with medication. Medication alone already has some bad side effects but combined with the alcohol it can make the drugs effects worse or even fatal. According to the National Institute on Alcohol Abuse and Alcoholism even if the alcohol and the medication isn’t taken at the same time they can still interact harmfully. Some medicines like cough syrup already contain some alcohol in it, up to 10% alcohol according to the National Institute on Alcohol Abuse and Alcoholism. Alcohol already affects the brain in a negative way by making the user drowsy or sleepy, or slowing down cognitive function, combined with medicines that have some similar effects makes the effects worse. Older people are more likely to be affected by the combination due to the older people get the longer it will take the body to process the alcohol so it lasts longer in the body according to the National Institute on Alcohol Abuse and Alcoholism. Since many older people are on medication there is a likely chance that they will be affected by the alcohol and drug mixture. Since it lasts longer in their bodies even if they didn’t take it at the same time they could possibly still be affected since the alcohol is still in their system. This also goes for women, since according to the National Institute on Alcohol Abuse and Alcoholism when women drink they reach a higher level of alcohol in the bloodstream faster than men generally due to there being less water in the body for the alcohol to contaminate.

Alcoholism Is The Addiction. (2019, Jul 24). Retrieved from https://papersowl.com/examples/alcoholism-is-the-addiction/

Addiction is Defined as Chronic