Alcohol Abuse Among Women in Salford 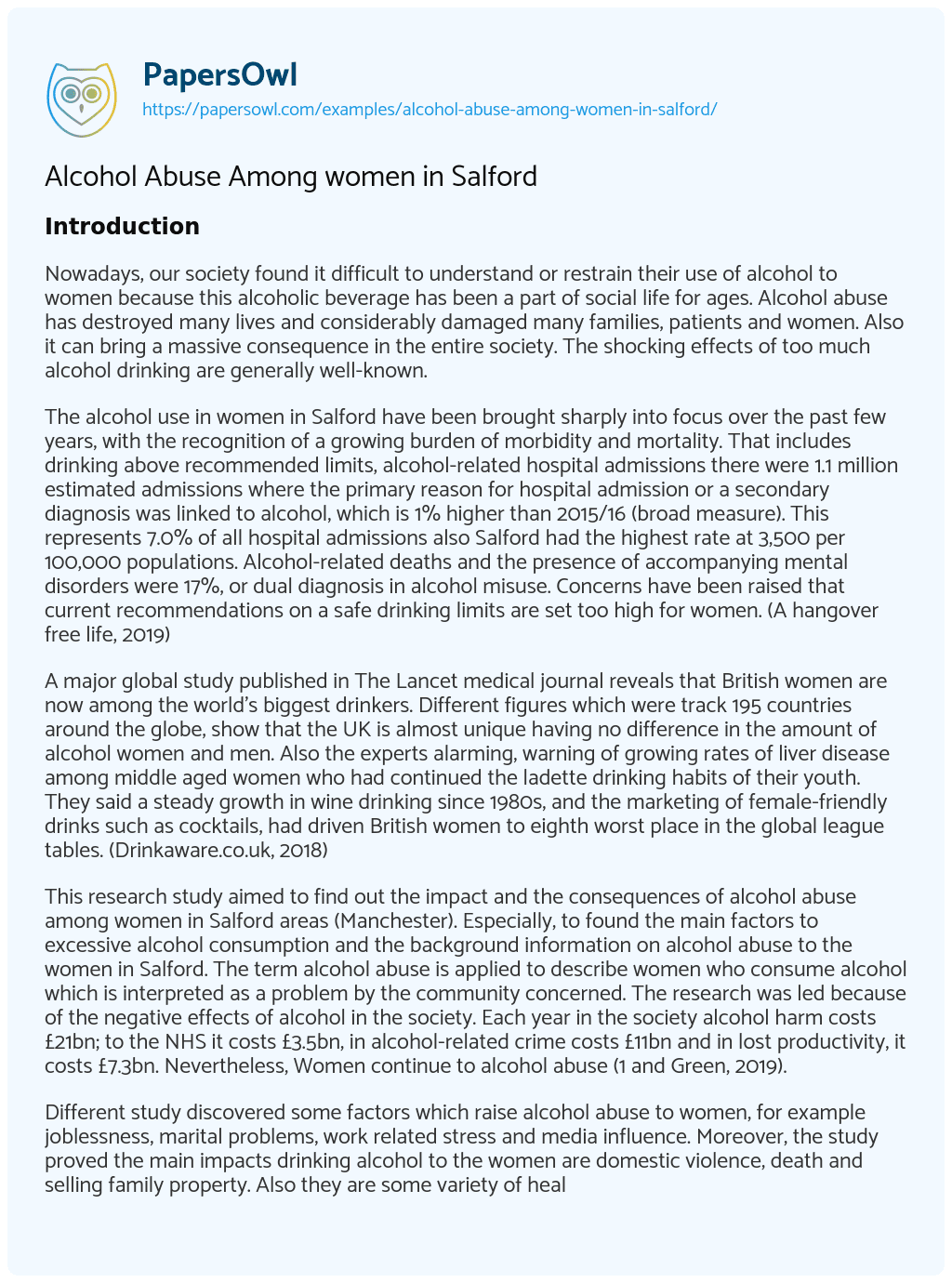 Nowadays, our society found it difficult to understand or restrain their use of alcohol to women because this alcoholic beverage has been a part of social life for ages. Alcohol abuse has destroyed many lives and considerably damaged many families, patients and women. Also it can bring a massive consequence in the entire society. The shocking effects of too much alcohol drinking are generally well-known.

The alcohol use in women in Salford have been brought sharply into focus over the past few years, with the recognition of a growing burden of morbidity and mortality. That includes drinking above recommended limits, alcohol-related hospital admissions there were 1.1 million estimated admissions where the primary reason for hospital admission or a secondary diagnosis was linked to alcohol, which is 1% higher than 2015/16 (broad measure). This represents 7.0% of all hospital admissions also Salford had the highest rate at 3,500 per 100,000 populations. Alcohol-related deaths and the presence of accompanying mental disorders were 17%, or dual diagnosis in alcohol misuse. Concerns have been raised that current recommendations on a safe drinking limits are set too high for women. (A hangover free life, 2019)

A major global study published in The Lancet medical journal reveals that British women are now among the world’s biggest drinkers. Different figures which were track 195 countries around the globe, show that the UK is almost unique having no difference in the amount of alcohol women and men. Also the experts alarming, warning of growing rates of liver disease among middle aged women who had continued the ladette drinking habits of their youth. They said a steady growth in wine drinking since 1980s, and the marketing of female-friendly drinks such as cocktails, had driven British women to eighth worst place in the global league tables. (Drinkaware.co.uk, 2018)

This research study aimed to find out the impact and the consequences of alcohol abuse among women in Salford areas (Manchester). Especially, to found the main factors to excessive alcohol consumption and the background information on alcohol abuse to the women in Salford. The term alcohol abuse is applied to describe women who consume alcohol which is interpreted as a problem by the community concerned. The research was led because of the negative effects of alcohol in the society. Each year in the society alcohol harm costs £21bn; to the NHS it costs £3.5bn, in alcohol-related crime costs £11bn and in lost productivity, it costs £7.3bn. Nevertheless, Women continue to alcohol abuse (1 and Green, 2019).

Different study discovered some factors which raise alcohol abuse to women, for example joblessness, marital problems, work related stress and media influence. Moreover, the study proved the main impacts drinking alcohol to the women are domestic violence, death and selling family property. Also they are some variety of health conditions including liver disease, cancers, HIV/AIDS and other STIs which can be contract by engaging in careless sex when drunk.

Alcohol is a drug. It is classed as a depressant, meaning that it slows down vital functions—resulting in slurred speech, unsteady movement, disturbed perceptions and an inability to react quickly. As for how it affects the mind, it is best understood as a drug that reduces a person’s ability to think rationally and distorts his or her judgment. Although classified as a depressant, the amount of alcohol consumed determines the type of effect. (Drugfreeworld.org, 2018).

Currently alcohol consumption has been known as a several fifth risk factor on health, also economic and social problems in the UK.The Health Survey for England shows data from 2014, 80% of women in England reported drinking in the last twelve months (compared to 87% of men) which is higher. Some finding has been identified by Irish University Undergraduates; 67.3% of women surveyed reported hazardous alcohol consumption, compared to 65.2% of men (Ias.org.uk, 2018).

The study, led by the University of Washington, shows that on average women in the UK are now consuming three alcoholic drinks daily-exactly the same as men. Fellow author Dr Colin Angus, from the University of Sheffield, said You can trace the rise in women‘s drinking back to the 1970s, when wine really came on the scene, and then continued, especially in the 1990s.

Furthermore, the new study, funded by the Bill and Melida Gates Foundation, found one drink a day was found to increase the risk of developing one of 23 alcohol-related health problems by 0.5 per cent. The impact of alcohol on women in recent years is also reflected in the significant take up of new clients on treatment programs year on year. Although the proportion of women referred for alcohol treatment programs has remained relatively constant since records began in 2008 (34–36%), the number of referrals of new female clients for treatment has risen from 23,484 in 2008/09, peaking at 28,530 in 2013/14. In 2016, there were 40,557 women in total in treatment programs addressing alcohol.

As well as this, the alcohol-related death rate for women has remained relatively static since 2008. As demonstrates, 7,900 women died of alcohol-related causes in the UK in 2014, a mortality rate of 28.7 per 100,000 populations. In addition, Nicholls, director of research and policy development, from Alcohol Concern and Alcohol Research UK, said the trends were fueling an alarming rise in cases of liver disease among women.

Also the director of campaigns, from Alcohol Concern, Emily Robinson, said women’s drinking had been on the rise for more than half a century, with many seeing’’ wine o’clock ‘’as a daily treat. ‘’Since the 1950s we have seen women’s drinking continued to increase and because alcohol is so cheap and easily available it is become an everyday grocery item. In the UK, there are various reports concerning alcohol related deaths among women, men and young.

SALFORD and Manchester have the highest number of alcoholics in the UK. And nine out of the top 10 areas for people taking medication to kick the booze are in the north. When it came to alcohol, meanwhile, Manchester fared even worse – the city came at number four overall for areas with alcohol problems. There were 11,520 alcohol related hospital admissions in Manchester in 2014-15, for everything from acute intoxication and withdrawal to liver disease. (Morris et al., 2018)

In 2014, alone there were a total of 234 deaths that were related to alcohol in the city, or around 72 for every 100,000 people – the third worst rate in the country. In fact, nearly 6,000 people in Manchester were being prescribed drugs to help with alcohol dependency in 2015-16. However, people in the area don’t seem to be quite so bad when it comes to drink-driving – there were only 98 road traffic accidents in Manchester between 2012/2014. All those statistics are starting to worry about the future generation for women, so we want to reduce or stop this alcohol abuse problem to women.

The quantitative research approach is used for this study using questionnaires to have a good source of a large amount important information about alcohol abuse in a short period of time. Also the results of the questionnaires can be quantified easily and quickly and can be analysed scientifically and objectively than others forms of research. It will focus on data. All data in this dissertation will be in a numeric form after using statistical tests by creating tables and graphs. The disadvantages of the quantitative method is that, sometime it is difficult to understand some forms of information for example feeling, behaviour. Also it questioning just a partial quantity of information, lacks of validity, it is no way of tell how truthful a respondent is being sometimes people respond on their personal understanding of the question and some information can be missing.

The study will allow a sample size of forty women. Those participants must be over sixteen or older. There will be a question on the survey requesting age, ethnicity, and amount of alcohol each day/week. The sample was divided into three groups; younger women (aged 16-24), mid women (aged 25-39) and older women (aged 40 to over 60). The questionnaire will be analyses using SPSS. First the questions will be edited, coded and entered into SPSS software to run the analysis. Basic descriptive statistics such as mean, median and mode will be used

Ethical consideration about the research will be taken. Participants will be provided with information sheet to enable they understand the study. They will then be given consent form to complete. Patient confidentiality will be maintained by making sure that all personal identifies like name, address and date of birth will be anonymized. Participants are free to withdraw from the study even if they have started with the questionnaire.

Different surveys show that there is a rise in alcohol drinking among women. Moreover some statistics reveal that a significant large number of women are drinking more than the recommend levels and some women often drink to boozing so putting their health at the risk. Historically the issue of drinking among women has caused moral panic within society. A clear strategy is required to fight this harmful drinking habit among women.

Rationale of significance of the study

Alcohol Abuse Among women in Salford. (2021, Apr 15). Retrieved from https://papersowl.com/examples/alcohol-abuse-among-women-in-salford/