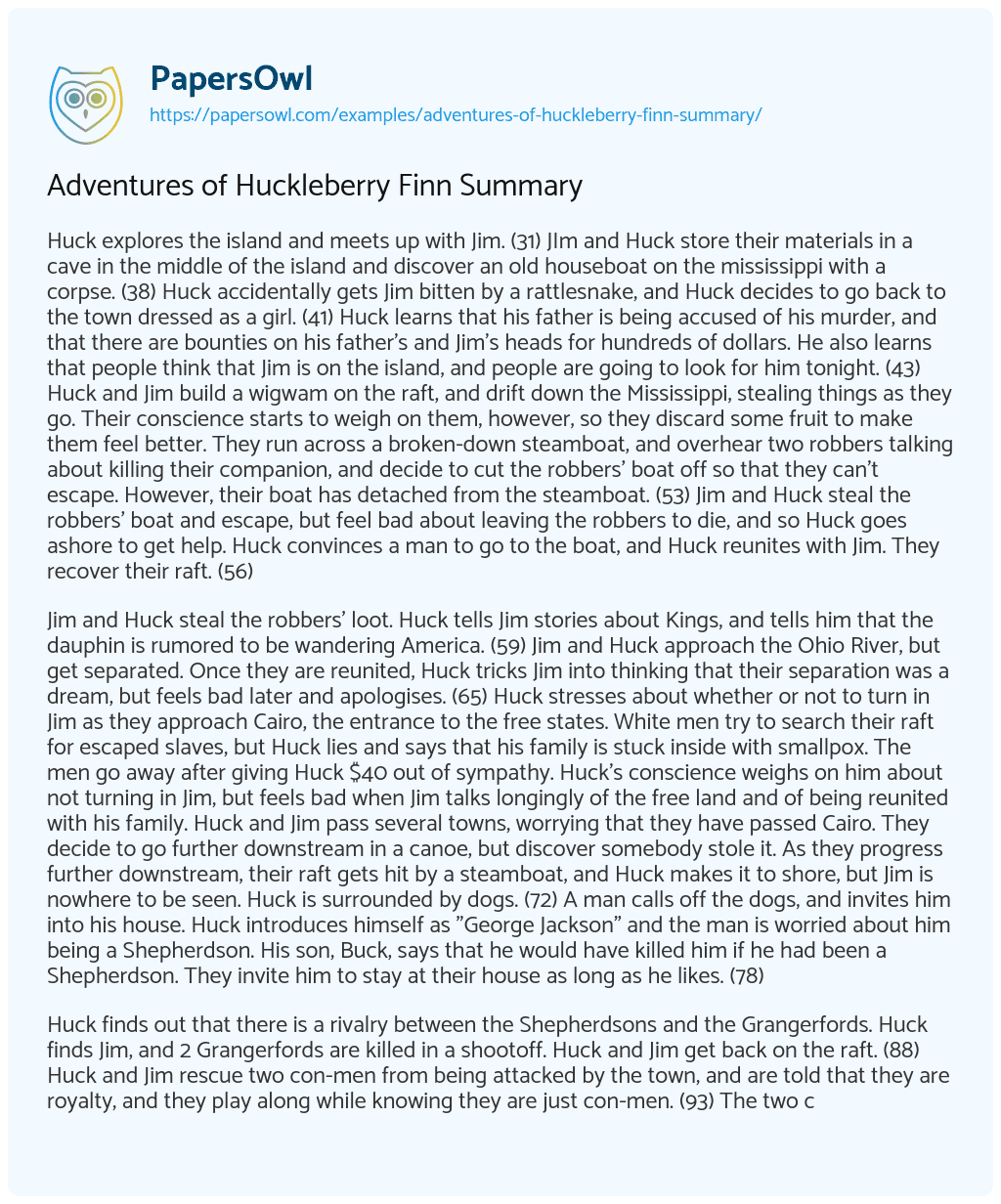 Huck explores the island and meets up with Jim. (31) JIm and Huck store their materials in a cave in the middle of the island and discover an old houseboat on the mississippi with a corpse. (38) Huck accidentally gets Jim bitten by a rattlesnake, and Huck decides to go back to the town dressed as a girl. (41) Huck learns that his father is being accused of his murder, and that there are bounties on his father’s and Jim’s heads for hundreds of dollars. He also learns that people think that Jim is on the island, and people are going to look for him tonight. (43) Huck and Jim build a wigwam on the raft, and drift down the Mississippi, stealing things as they go. Their conscience starts to weigh on them, however, so they discard some fruit to make them feel better. They run across a broken-down steamboat, and overhear two robbers talking about killing their companion, and decide to cut the robbers’ boat off so that they can’t escape. However, their boat has detached from the steamboat. (53) Jim and Huck steal the robbers’ boat and escape, but feel bad about leaving the robbers to die, and so Huck goes ashore to get help. Huck convinces a man to go to the boat, and Huck reunites with Jim. They recover their raft. (56)

Jim and Huck steal the robbers’ loot. Huck tells Jim stories about Kings, and tells him that the dauphin is rumored to be wandering America. (59) Jim and Huck approach the Ohio River, but get separated. Once they are reunited, Huck tricks Jim into thinking that their separation was a dream, but feels bad later and apologises. (65) Huck stresses about whether or not to turn in Jim as they approach Cairo, the entrance to the free states. White men try to search their raft for escaped slaves, but Huck lies and says that his family is stuck inside with smallpox. The men go away after giving Huck $40 out of sympathy. Huck’s conscience weighs on him about not turning in Jim, but feels bad when Jim talks longingly of the free land and of being reunited with his family. Huck and Jim pass several towns, worrying that they have passed Cairo. They decide to go further downstream in a canoe, but discover somebody stole it. As they progress further downstream, their raft gets hit by a steamboat, and Huck makes it to shore, but Jim is nowhere to be seen. Huck is surrounded by dogs. (72) A man calls off the dogs, and invites him into his house. Huck introduces himself as “George Jackson” and the man is worried about him being a Shepherdson. His son, Buck, says that he would have killed him if he had been a Shepherdson. They invite him to stay at their house as long as he likes. (78)

Huck finds out that there is a rivalry between the Shepherdsons and the Grangerfords. Huck finds Jim, and 2 Grangerfords are killed in a shootoff. Huck and Jim get back on the raft. (88) Huck and Jim rescue two con-men from being attacked by the town, and are told that they are royalty, and they play along while knowing they are just con-men. (93) The two con men work their way through a nearby town. They make a leaflet so that Jim has an excuse for not being a runaway slave. (101) The “duke and the dauphin” practice lines from Hamlet and other Shakespeare plays. A man named Sherburn shoots a drunk man in front of the man’s daughter. The town goes off to “lynch” him. (108) The mob goes to Sherburn’s house but Sherburn gives them a lecture on cowardice. Huck goes to the circus. (110) The Duke and Dauphin perform their play, but people are embarrassed about getting ripped off, so they lie to the rest of the town to get more crowds. The duke and dauphin, along with Huck and Jim, escape back down the river after making almost 500 dollars. Jim remembers beating his daughter because he thought she wasn’t listening, when in reality she was deaf. (118) The Duke and Dauphin discover that a man with the last name Wilks has recently died, but has left much of his property to his two brothers. They decide to impersonate his brothers in order to receive his fortune. (120)

The letter from Wilks gives 3,000 dollars and more in real estate to the brothers, and so they retrieve their money from the basement before tricking one of the sisters to give them all of the money from the will, the whole $6,000. Huck is disgusted by their actions. (126) Huck eats dinner with Joanna, the youngest of the Wilks sisters. Joanna starts to question whether the whole thing is made up, but is reassured by her sisters. Huck feels terrible about swindling the Wilks family, and so he takes the $6,000 and runs away. (136) Huck hides the money in Wilks’ coffin, but it gets sealed in. The Dauphin sells off “his” slaves and breaks up their family. (144) Huck tells Mary Jane the truth about the con men. The real Harvey and William arrive at the town. (144) The real Harvey and William and the con men are compared, but it cannot be determined. The coffin is opened to aid in the debate, and the $6000 is found. Huck and Jim escape downriver but are pursued by the con men. (154) The dauphin almost strangles Huck, but everything is fine because both of the con men think the other hid the money, and they do not suspect Huck. (157) The con men trick Huck and sell Jim into slavery. Huck decides to break him out. (162)

Huck arrives at the home of Jim’s new owners. They greet him as “Tom”, and he soon realizes that they are none other than Tom Sawyer’s aunt and uncle. (169) Huck meets Tom, and he agrees to help break Jim out of slavery. (171) Huck comes up with a plan to break out Jim, but Tom has a much more showy plan that includes digging a tunnel. They decide to use Tom’s plan, and see Jim again. (178) Tom decides to invent obstacles in Jim’s escape to make it more fun. (180) Huck and Tom dig their way to Jim, but they invent more obstacles and decide to bake a “Witch Pie” to smuggle Jim a ladder. (189) Aunt Sally finds all of the missing items. She thinks rats may have taken them, and confuses Uncle Silas when he goes to plug the holes and finds they have already been plugged. Tom and Huck finish the “Witch Pie” and send it to Jim. (193) Tom invents more obstacles, and Jim resists. (195) Uncle Silas tries to put an ad in the papers about Jim, but Tom writes letters warning of Jim’s upcoming theft to make it harder for him. (203) Huck hears a group of farmers talking downstairs, and goes to warn Tom and Jim, but the shed is attacked and all 3 of them flee through the tunnel. Tom is shot in the leg.

Jim suggests that they get a doctor, confirming Huck’s suspicions that Jim is actually “white inside”, saying “I knowed he was white inside”. (207) CLIMAX Huck finds a doctor and sends him to Tom and Jim. He is returned to the Phelps’ and is surprised and softened by Aunt Sally’s concern for his safety. (210) FALLING ACTION Aunt Sally receives a letter from Aunt Polly, but forgets about it when Tom is brought in by the doctor on a mattress. Jim is in chains; he gave up his freedom to save Tom. Aunt Polly arrives to clarify communications, and yells at Huck and Tom when she notices them. Tom tells everyone that Jim was freed by Miss Watson in her will 2 months prior. (213) FALLING ACTION Jim is unchained and is given a lot of food. Tom gives him $40 for everything he did. Huck finds out that it was his father on the houseboat dead. Tom decides to head west since he doesn’t want to be “sivilized”. (220)

The Adventures of Huckleberry Finn Entries