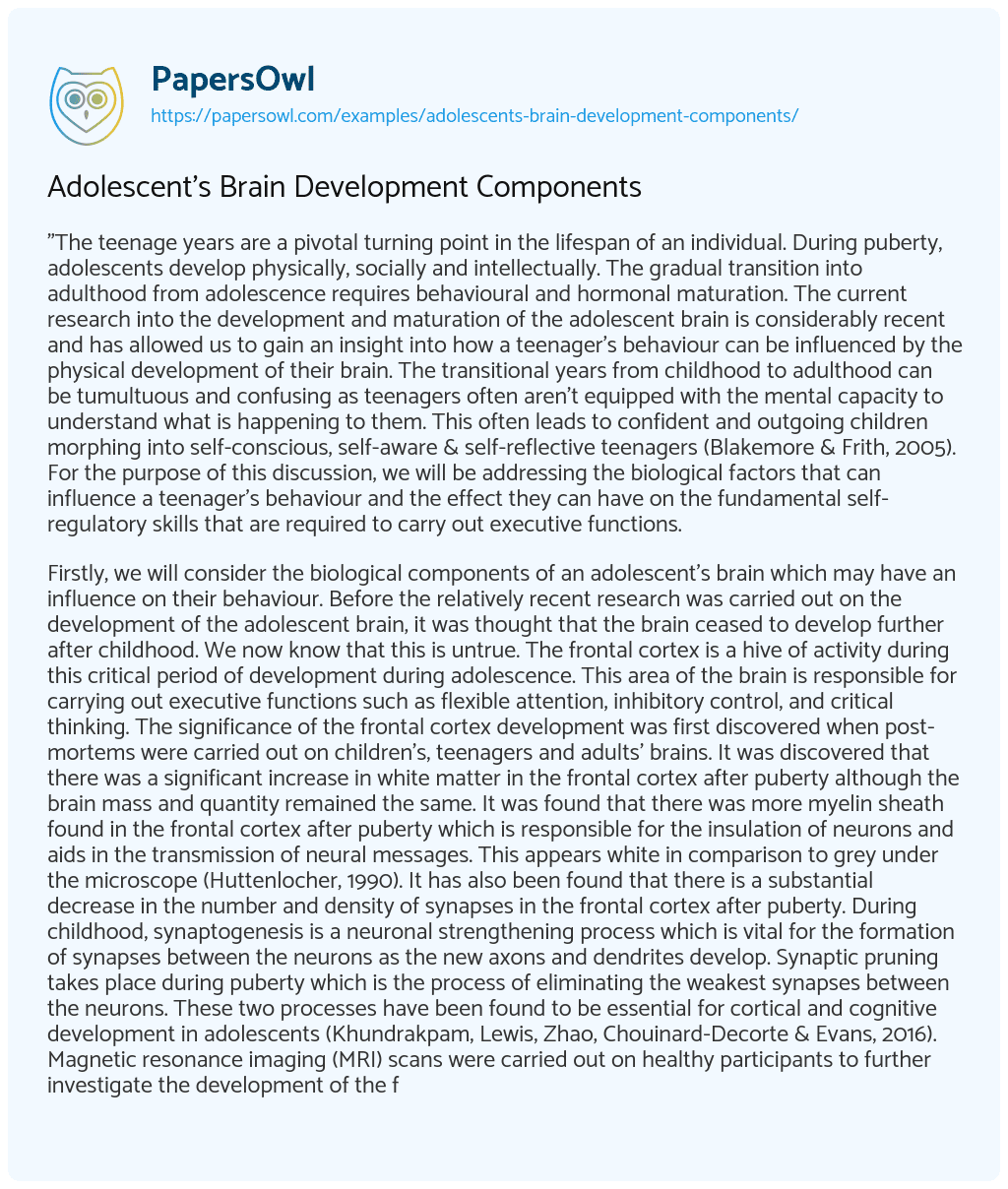 “The teenage years are a pivotal turning point in the lifespan of an individual. During puberty, adolescents develop physically, socially and intellectually. The gradual transition into adulthood from adolescence requires behavioural and hormonal maturation. The current research into the development and maturation of the adolescent brain is considerably recent and has allowed us to gain an insight into how a teenager’s behaviour can be influenced by the physical development of their brain. The transitional years from childhood to adulthood can be tumultuous and confusing as teenagers often aren’t equipped with the mental capacity to understand what is happening to them. This often leads to confident and outgoing children morphing into self-conscious, self-aware & self-reflective teenagers (Blakemore & Frith, 2005). For the purpose of this discussion, we will be addressing the biological factors that can influence a teenager’s behaviour and the effect they can have on the fundamental self-regulatory skills that are required to carry out executive functions.

Firstly, we will consider the biological components of an adolescent’s brain which may have an influence on their behaviour. Before the relatively recent research was carried out on the development of the adolescent brain, it was thought that the brain ceased to develop further after childhood. We now know that this is untrue. The frontal cortex is a hive of activity during this critical period of development during adolescence. This area of the brain is responsible for carrying out executive functions such as flexible attention, inhibitory control, and critical thinking. The significance of the frontal cortex development was first discovered when post-mortems were carried out on children’s, teenagers and adults’ brains. It was discovered that there was a significant increase in white matter in the frontal cortex after puberty although the brain mass and quantity remained the same. It was found that there was more myelin sheath found in the frontal cortex after puberty which is responsible for the insulation of neurons and aids in the transmission of neural messages. This appears white in comparison to grey under the microscope (Huttenlocher, 1990). It has also been found that there is a substantial decrease in the number and density of synapses in the frontal cortex after puberty. During childhood, synaptogenesis is a neuronal strengthening process which is vital for the formation of synapses between the neurons as the new axons and dendrites develop. Synaptic pruning takes place during puberty which is the process of eliminating the weakest synapses between the neurons. These two processes have been found to be essential for cortical and cognitive development in adolescents (Khundrakpam, Lewis, Zhao, Chouinard-Decorte & Evans, 2016). Magnetic resonance imaging (MRI) scans were carried out on healthy participants to further investigate the development of the frontal cortex. They also found a higher grey matter content in children and a higher white matter content in the prefrontal cortex of adolescents (Sowell, Thompson, Holmes, Jernigan, & Toga, 1999). As we now know, the frontal cortex is responsible for carrying out executive functions such as making complex decisions, we will now investigate if and how there is evidence to suggest that a teenager’s behaviour can be blamed on their incomplete cortical development.

We will be discussing this with regard to self-regulatory behaviour. The process of self-regulation has been defined as the management of motivation and the organisation of emotions. It involves the controlling of our emotions and directing of behaviour to meet the challenges of the environment in order to work towards and achieve a conscious purpose (Steinberg & Belsky, 1996). In adolescence, the self-regulatory parts of the brain are still maturing as they are localised in the frontal cortex. If teenagers are not equipped with the appropriate self-regulatory skills this can create a window of vulnerability which can make them more susceptible to taking dangerous risks that may affect their development and health in the future (Simpson, 2001).

Different cognitive decision-making styles have been explored by researchers in a way to also explain irresponsible risk-taking behaviour. The two cognitive thinking styles have been described as hot and cold. Hot cognition occurs when an individual is thinking under conditions of pressure, intense emotion and high arousal. The antithesis of this is cold cognition which is experienced when circumstances are far less intense and manageable, it allows them to be critical and analyse the situation appropriately. Teenagers seem to make much wiser decisions when using this cognitive thinking style (Kunda, 1990). The addition of complex feeling and emotions that are experienced during adolescence must also be considered when understanding a teenager’s decision-making abilities. These emotions may include the need to impress their friends and succumb to peer pressure or the fear and anxiety of being caught for doing something they shouldn’t be. These thoughts can make it difficult for teenagers to fully comprehend the consequences of their decisions or to properly think through the potential outcomes of their behaviour. (cite 26) A study was carried out to examine how risk-taking behaviour in adolescents can be influenced by their peer group. A driving simulation game was used to determine this. Researchers were interested in whether teenagers would decide to run a yellow light or not. It was found that adolescents made safer decisions when they were driving alone than when they were driving with their friends. It was also found that when teenagers found themselves in an emotionally arousing situation or environment their hot cognitive thinking was more prominent, and these teenagers were found to take more impulsive chances and make riskier decisions (Steinberg, 2008). As we have determined that there is a link between adolescence and risk-taking behaviour we will now investigate the questionably stigmatised relationship between adolescence and substance abuse.

The teenage years are often a time when we are inclined to take more risks. There is an assumption that this is when we are likely to first encounter experiences with drugs and alcohol. A study was carried out to determine if adolescents are more inclined to engage in substance abuse due to their attitudes towards risk-taking and reward seeking. The results of this hypothesis would hopefully be revealed by examining the responses of the reward-seeking components in the brain such as the ventral striatum in the limbic system. An experiment was carried out to investigate the existence of this relationship. Structural and functional MRI’s were carried out in over 250 healthy adolescents and in 31 adolescents who reportedly suffered from substance abuse. These were used to assess the activation of the structures of the limbic system during the tasks. A momentary incentive delay task was used to measure activation during reward anticipation and the risk-taking bias was measured by using a gambling task. The results of the gambling tasks revealed a significant stimulation of the ventral striatum in the limbic system as a response for reward anticipation. The results of this study reveal the neuronal reasons for how the risk-taking bias in adolescents may contribute to the reasons why adolescents engage in substance abuse (Schneider, 2012). A more recent study was carried out on older adolescents to investigating the effects of impulsivity and peer influence on alcohol consumption. It was found that peer influence had a direct impact on alcohol consumption which was found to be regardless of impulsivity. This indicates that impressionable adolescents who are susceptible to peer pressure have a higher risk of engaging in heavy drinking and substance abuse (Gullo et al., 2017). It has been found that our peer’s opinions of us become very important as we progress through adolescence and we tend to look to our peers for guidance when behaving and making decisions rather than the adults around us (Gardner & Steinberg, 2005). This research reveals that even though risk-taking behaviour can be influenced by personal factors like our own impulsivity, our peers can still have a significant influence on how we behave.

Neurological studies have revealed to us that the human brain is still undergoing structural, functional and chemical developments during adolescence. This is indicative of teenagers being in a particularly vulnerable stage of their lives. They frequently face daunting and overwhelming challenges and decisions, yet they often cannot fully comprehend them because their prefrontal cortex has not fully developed yet. This can prevent them from thinking logically, critically and coherently like an adult would in times of intense stress or pressure. Although adolescents may be likely to make mistakes as they are growing and learning to make their own decisions, research has shown that this is beneficial for their development to make these mistakes. Making these mistakes can assist them in learning how to self-regulate their emotions and learn from past experiences (Arain et al., 2013). An adolescent’s biological brain development may hinder their ability to make the wisest decision in a clear and concise manner but their peers’ opinion of them and the environment around and their individual thinking style them may also play a significant role. It is important to also consider the social personal factors that may be influencing how teenagers behave. For these reasons, it cannot be fully supported that a teenager’s behaviour can be fully blamed on their brain.”

The Brain of a Psycopath