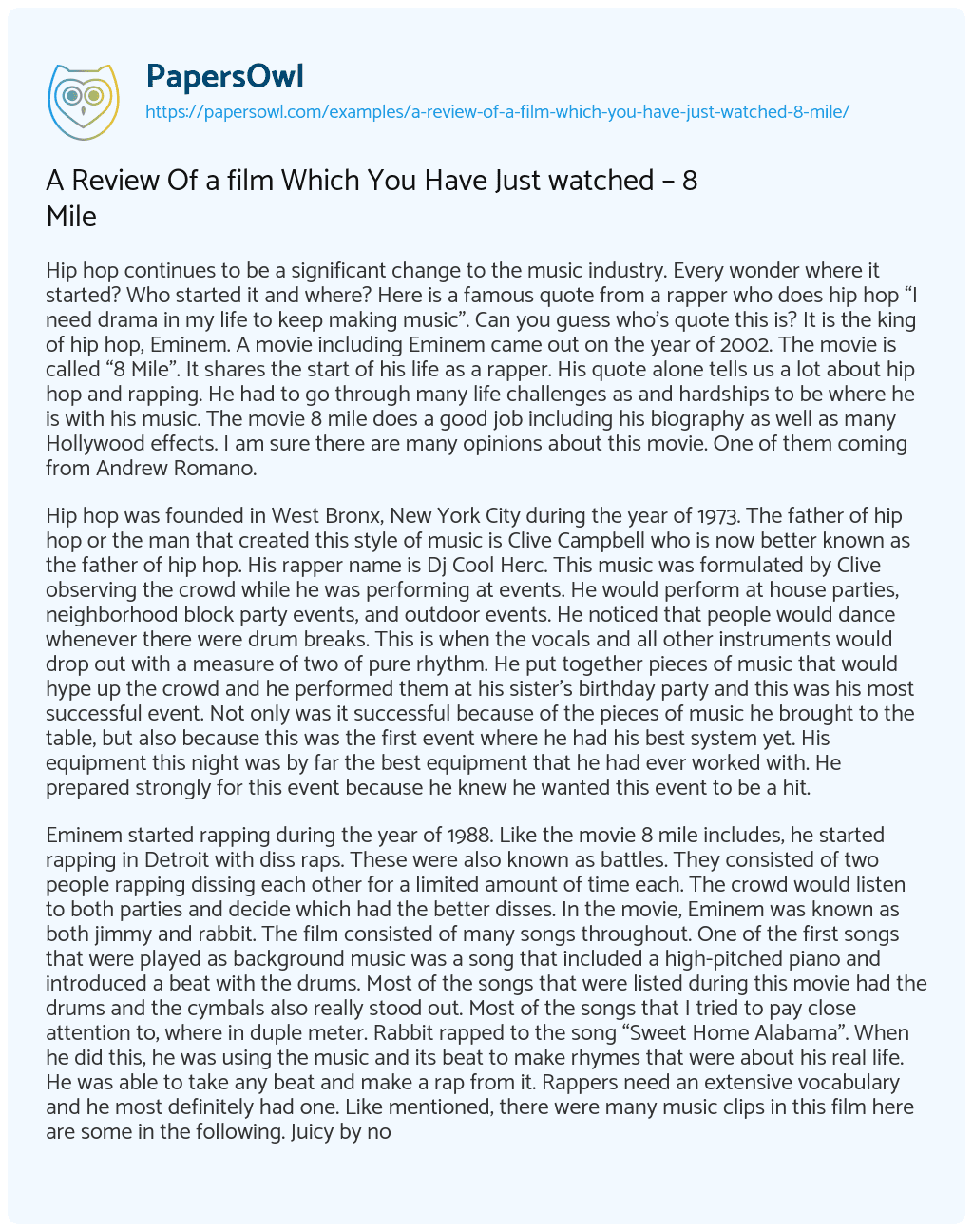 Hip hop continues to be a significant change to the music industry. Every wonder where it started? Who started it and where? Here is a famous quote from a rapper who does hip hop “I need drama in my life to keep making music”. Can you guess who’s quote this is? It is the king of hip hop, Eminem. A movie including Eminem came out on the year of 2002. The movie is called “8 Mile”. It shares the start of his life as a rapper. His quote alone tells us a lot about hip hop and rapping. He had to go through many life challenges as and hardships to be where he is with his music. The movie 8 mile does a good job including his biography as well as many Hollywood effects. I am sure there are many opinions about this movie. One of them coming from Andrew Romano.

Hip hop was founded in West Bronx, New York City during the year of 1973. The father of hip hop or the man that created this style of music is Clive Campbell who is now better known as the father of hip hop. His rapper name is Dj Cool Herc. This music was formulated by Clive observing the crowd while he was performing at events. He would perform at house parties, neighborhood block party events, and outdoor events. He noticed that people would dance whenever there were drum breaks. This is when the vocals and all other instruments would drop out with a measure of two of pure rhythm. He put together pieces of music that would hype up the crowd and he performed them at his sister’s birthday party and this was his most successful event. Not only was it successful because of the pieces of music he brought to the table, but also because this was the first event where he had his best system yet. His equipment this night was by far the best equipment that he had ever worked with. He prepared strongly for this event because he knew he wanted this event to be a hit.

Eminem started rapping during the year of 1988. Like the movie 8 mile includes, he started rapping in Detroit with diss raps. These were also known as battles. They consisted of two people rapping dissing each other for a limited amount of time each. The crowd would listen to both parties and decide which had the better disses. In the movie, Eminem was known as both jimmy and rabbit. The film consisted of many songs throughout. One of the first songs that were played as background music was a song that included a high-pitched piano and introduced a beat with the drums. Most of the songs that were listed during this movie had the drums and the cymbals also really stood out. Most of the songs that I tried to pay close attention to, where in duple meter. Rabbit rapped to the song “Sweet Home Alabama”. When he did this, he was using the music and its beat to make rhymes that were about his real life. He was able to take any beat and make a rap from it. Rappers need an extensive vocabulary and he most definitely had one. Like mentioned, there were many music clips in this film here are some in the following. Juicy by notorious big was a song that was included in the movie. This song was also in duple meter. The song “I’ll be there for you by Method Man Feat. Mary J Blige is also in duple meter and it is similar to Juicy by notorious because they both have the main vocals along with a female secondary vocals and drums as a main instrument. Another song with strong cymbals is Shimmy Shimmy Ya by Ol’ Dirty Bastard and it is in duple meter. The song “This is how we do it” by Motell Jordan was also in the film and it is in duple meter. A really cool scene in the movie is where rabbit starts rapping to someone beat boxing. This is when they make a beat with their mouth and no instruments are included.

I watched a review on youtube about this movie. It is by Andrew Romano. I agree with this review in many ways. There are certain characters in the movie that were plugged into from his real life. I also didn’t expect Eminem to be a good actor because he is a rapper, but he did very well on putting this movie together. Andrew also mentions how the music in the background throughout the film drew into the movie and I would have to agree. When Eminem was writing his notes, the music would contribute to the scenes by making it come together. The rap battles were all very engaging and full of excitement. I also agree that they portrayed Detroit very well. There were beat up cars, fallen houses and, industrial scenes. The bad points Andrew mentioned where some of the bad acting that Eminem made which I would have to disagree with because when I watched the film I didn’t notice any bad acting. He gave this movie an 8/10 and put it in his top 5 movies. I would also give this movie around the same rating because I thought the acting, the scenes, and overall the film was entertaining and realistic to watch. This review had many comments below the video. Most of the comments had the same impression of the movie review as I did. A lot of them were agreeing with the thoughts of Andrew.

The rapping reflected the times of Detroit. At that time, young rappers would battle to try and get recognized and get into studio time. 8 mile used their music as both background music and also as a focal point My favorite scene in the movie was the ending and this is where they used the music as a focal point. Rabbit had just won three dissing battles against his enemies. Despite the fact that he had to work that night he asked a coworker to work for him for a couple hours. He was not planning on going to this rap battle, but he changed his mind last minute. He won the three battles and earned his respect from everyone at the meet. This is where my favorite part starts. He realized he was not going to rely on anyone but himself. He hugged his good friend and let him know that he was going to do his own thing when it came to music. He gave his friend a hug before he started walking off. As he was walking off, the song lose yourself came on. This is a song that Eminem himself wrote. This song fit so perfect with the ending because it concludes the movie. He was afraid to show everyone who he was at first but with this rap battle he realized he was going to keep pushing and use his opportunities to progress.

Like mentioned before, hip hop originated from Dj Cool Herc. It has now been around for going on to 46 years. It will continue to grow and change as time goes by. The movie 8 mile was just a small example of hip hop and rapping. The movie was about Jimmy but had a taste of Eminem’s life in the story line. Many songs were featured in this film and half of them were passive, where they were just background music. The other half were active, and this is when Jimmy was rapping in the battles as well as singing to himself in the mirror. Most of the songs if not all, that were in the film; were all in duple mater. All of the songs on this film were also in the same category of hip hop besides one song and that was “Sweet Home Alabama”. The hip hop music consisted of mostly vocals and drums. Going on to the review, Andrew had really good review on the movie 8 mile. The actors, the settings, and the overall story line of this movie were realistic and interesting. There wasn’t a dull moment throughout the movie because it kept the viewers were entertained either with good music or drama. The film was recorded to be in in Detroit and at this time, rappers would use battles to try to get recognized by record labels. Again, the song “Lose Yourself” concluded the movie because it was a song that was written by Eminem. It helped plot the point of the movie and also reminded the audience the point of the movie.

A Review Of a film Which You Have Just watched – 8 Mile. (2021, Apr 28). Retrieved from https://papersowl.com/examples/a-review-of-a-film-which-you-have-just-watched-8-mile/