With Love, Violence and Vengeance 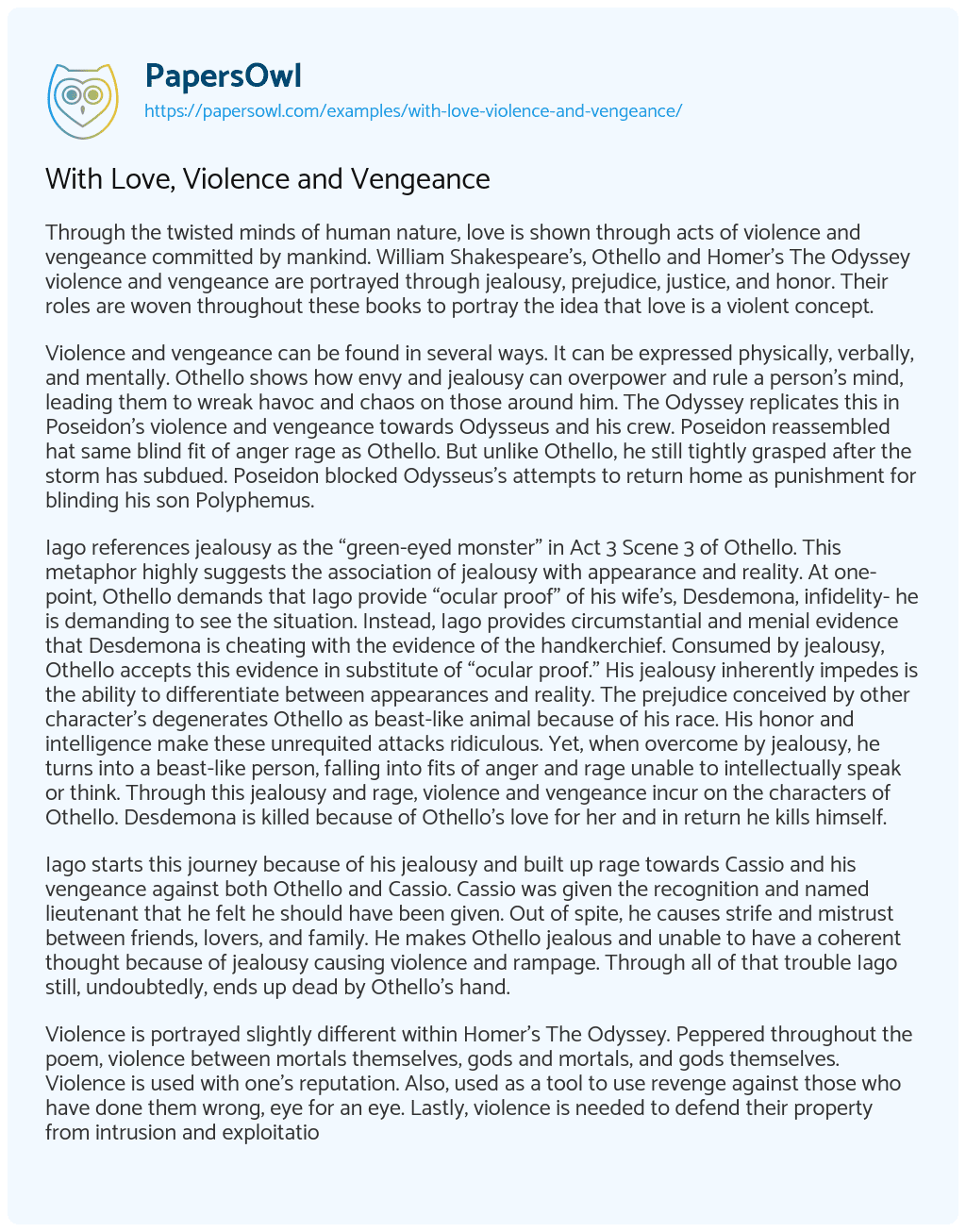 Through the twisted minds of human nature, love is shown through acts of violence and vengeance committed by mankind. William Shakespeare’s, Othello and Homer’s The Odyssey violence and vengeance are portrayed through jealousy, prejudice, justice, and honor. Their roles are woven throughout these books to portray the idea that love is a violent concept.

Violence and vengeance can be found in several ways. It can be expressed physically, verbally, and mentally. Othello shows how envy and jealousy can overpower and rule a person’s mind, leading them to wreak havoc and chaos on those around him. The Odyssey replicates this in Poseidon’s violence and vengeance towards Odysseus and his crew. Poseidon reassembled hat same blind fit of anger rage as Othello. But unlike Othello, he still tightly grasped after the storm has subdued. Poseidon blocked Odysseus’s attempts to return home as punishment for blinding his son Polyphemus.

Iago references jealousy as the “green-eyed monster” in Act 3 Scene 3 of Othello. This metaphor highly suggests the association of jealousy with appearance and reality. At one-point, Othello demands that Iago provide “ocular proof” of his wife’s, Desdemona, infidelity- he is demanding to see the situation. Instead, Iago provides circumstantial and menial evidence that Desdemona is cheating with the evidence of the handkerchief. Consumed by jealousy, Othello accepts this evidence in substitute of “ocular proof.” His jealousy inherently impedes is the ability to differentiate between appearances and reality. The prejudice conceived by other character’s degenerates Othello as beast-like animal because of his race. His honor and intelligence make these unrequited attacks ridiculous. Yet, when overcome by jealousy, he turns into a beast-like person, falling into fits of anger and rage unable to intellectually speak or think. Through this jealousy and rage, violence and vengeance incur on the characters of Othello. Desdemona is killed because of Othello’s love for her and in return he kills himself.

Iago starts this journey because of his jealousy and built up rage towards Cassio and his vengeance against both Othello and Cassio. Cassio was given the recognition and named lieutenant that he felt he should have been given. Out of spite, he causes strife and mistrust between friends, lovers, and family. He makes Othello jealous and unable to have a coherent thought because of jealousy causing violence and rampage. Through all of that trouble Iago still, undoubtedly, ends up dead by Othello’s hand.

Violence is portrayed slightly different within Homer’s The Odyssey. Peppered throughout the poem, violence between mortals themselves, gods and mortals, and gods themselves. Violence is used with one’s reputation. Also, used as a tool to use revenge against those who have done them wrong, eye for an eye. Lastly, violence is needed to defend their property from intrusion and exploitation. Violence is used to defend one’s reputation, exact revenge, and the protection of possessions.

Odysseus and other characters within the epic are motivated to return home by the pursuit of glory and honor. Glory is attained through the violence and victory in battle and feats of strength. Sometimes the two conflict with one another. Striving for glory can lead to recklessness, proud and boastful behavior that can and did violate customs and anger the gods. A major incident of the was between Odysseus and Poseidon.

The relationship between Poseidon and Odysseus are the most noticeable traces of vengeance and violence within Homer’s The Odyssey. In order to escape from the cave of the cyclops, Polyphemus, Odysseus must blind the giant. But unfortunately, the cyclops is Poseidon’s son: Odysseus has enraged a formidable foe. Unable to kill Odysseus, because the fates deemed that he would make it home, but he can fulfill his son wishes, leaving Odysseus broken, alone, and very late, his shipmates lost, and his home in turmoil and strife. In a more controversial and temper tantrum like parts of the epic, Poseidon takes out his anger and frustrations on the Phaeacians, whose only offense was assisting Odysseus on his journey home.

In the course of his Hero’s journey, Odysseus seems to repent his once youthful hunt for glory. “Disguised as a beggar, he speaks to one of the suitors. “I too seemed destined to be a man of fortune once/and a wild wicked swath I cut, indulged my lust for violence… Let not man ever be lawless all his life, /just take in peace what gifts the gods will send.” He humbles himself in order to avenge the dishonor brought on his household.

Odysseus exacts vengeance in a more formidable way. It is directed at his disloyal servants and Penelope’s horde of suitors that come through Penelope’s challenge, all those who wrong him shall die a death on “equal magnitude” in the horrendous wrongdoings that have done. (Book 22) The leader, Antinous, dies a gruesome and undignified death with an arrow shot through his throat. Eurymachus dies with an arrow this liver, and Amphinomus, Penelope’s favorite and mediocrely good, dies swiftly by decapitation. Odysseus is avenging the lack of respect from the suitors and the lack of loyalty from his servants to his property and family.

Violence served as a method for Othello and Odysseus to either protect one’s reputation or show their love and to ensure justice was brought to their wrongdoers. The suitors and disloyal servants we not given an honorable death by Odysseus. Iago was stabbed by Othello after he learned all of Iago’s wrong doings. Violence and vengeance came in forms of public reprisal or in a more extreme form- public executions.

With Love, Violence and Vengeance. (2021, Jul 01). Retrieved from https://papersowl.com/examples/with-love-violence-and-vengeance/

Penelope, the Queen of Ithaca