Why a Family Meal is more Important than Fast Food 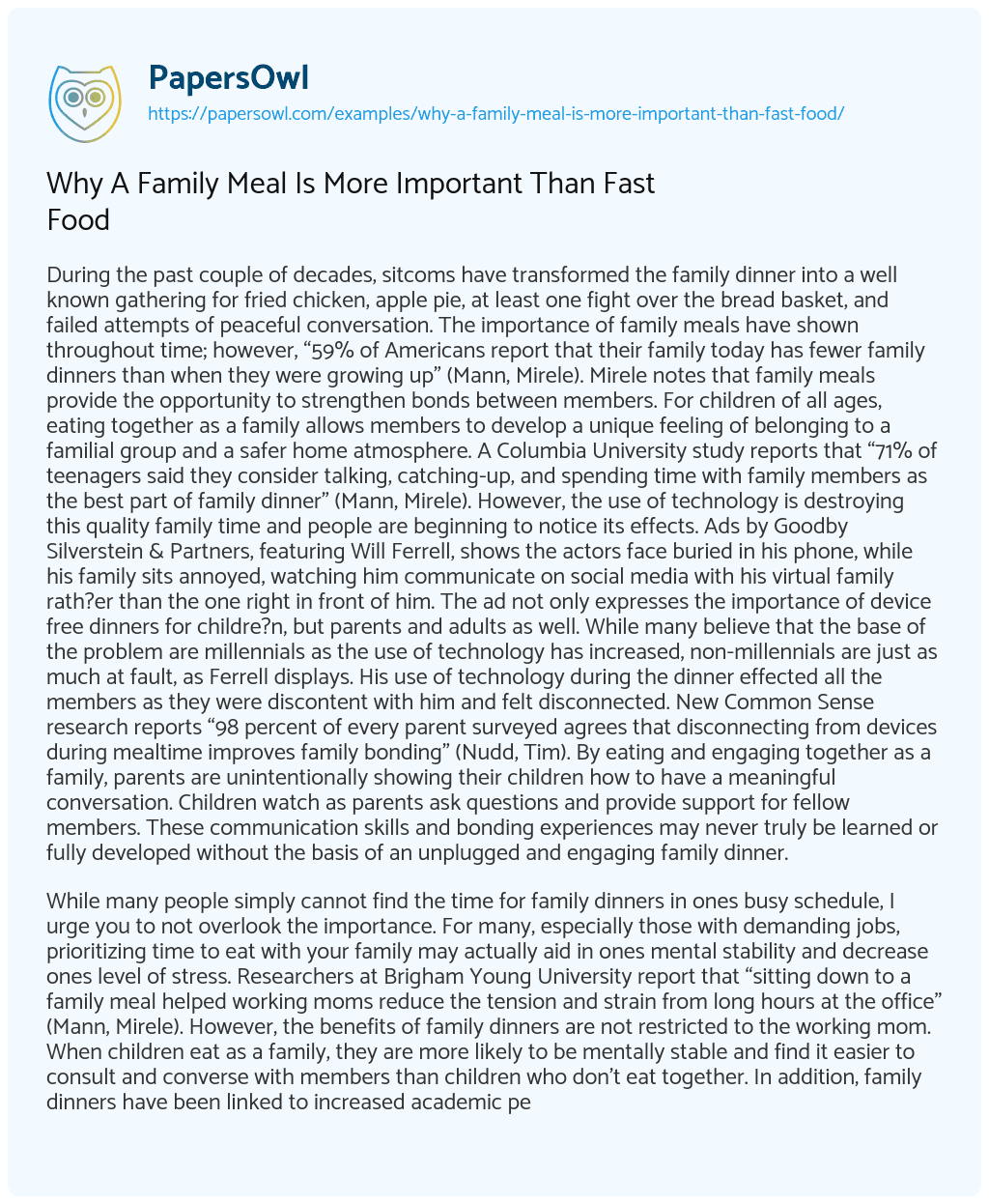 During the past couple of decades, sitcoms have transformed the family dinner into a well known gathering for fried chicken, apple pie, at least one fight over the bread basket, and failed attempts of peaceful conversation. The importance of family meals have shown throughout time; however, “59% of Americans report that their family today has fewer family dinners than when they were growing up” (Mann, Mirele). Mirele notes that family meals provide the opportunity to strengthen bonds between members. For children of all ages, eating together as a family allows members to develop a unique feeling of belonging to a familial group and a safer home atmosphere. A Columbia University study reports that “71% of teenagers said they consider talking, catching-up, and spending time with family members as the best part of family dinner” (Mann, Mirele). However, the use of technology is destroying this quality family time and people are beginning to notice its effects. Ads by Goodby Silverstein & Partners, featuring Will Ferrell, shows the actors face buried in his phone, while his family sits annoyed, watching him communicate on social media with his virtual family rath?er than the one right in front of him. The ad not only expresses the importance of device free dinners for childre?n, but parents and adults as well. While many believe that the base of the problem are millennials as the use of technology has increased, non-millennials are just as much at fault, as Ferrell displays. His use of technology during the dinner effected all the members as they were discontent with him and felt disconnected. New Common Sense research reports “98 percent of every parent surveyed agrees that disconnecting from devices during mealtime improves family bonding” (Nudd, Tim). By eating and engaging together as a family, parents are unintentionally showing their children how to have a meaningful conversation. Children watch as parents ask questions and provide support for fellow members. These communication skills and bonding experiences may never truly be learned or fully developed without the basis of an unplugged and engaging family dinner.

While many people simply cannot find the time for family dinners in ones busy schedule, I urge you to not overlook the importance. For many, especially those with demanding jobs, prioritizing time to eat with your family may actually aid in ones mental stability and decrease ones level of stress. Researchers at Brigham Young University report that “sitting down to a family meal helped working moms reduce the tension and strain from long hours at the office” (Mann, Mirele). However, the benefits of family dinners are not restricted to the working mom. When children eat as a family, they are more likely to be mentally stable and find it easier to consult and converse with members than children who don’t eat together. In addition, family dinners have been linked to increased academic performance. A report by CASA found that teens who have “between five and seven family dinners per week were twice as likely to report receiving mostly A’s and B’s in school, compared to those teens who have fewer than three family dinners per week” (Mann, Mirele). While eating with ones family does not guarantee excellent academic performance and will not transform a failing student to a straight A student, there is a definitive link between the two, one worth considering the next time you plan on skipping family dinner. Studies also prove a connection between family dinners and behavior in children. It makes perfect sense that an unstable family life caused by lack of communication among members could risk children’s behavior and influence ones choices. Researchers at the University of Minnesota’s School of Public Health discovered that having a meal together, even with distant relatives, “reduces the risk [to smoke, drink alcohol, try drugs, and feel depressed] among youth” (Morgan, Jana). Therefore, family dinners effect the mental health of not only children, through academic performance and behavior, but adults too, as coming together can aid in the daily stressors of life.

While family dinners play an important role in mental health, the physical health of members who do not eat together as a family can be at risk as well. Think about it, do you make yourself a homemade meal or eat fast food when theres a tough day at the office? Most people will choose going out to eat than cooking a homemade meal like their momma would. However, most meals from a restaurant have as much as “60% more calories than a homemade meal”(Mann, Mirele). Add in the increasing portion size of a restaurant meal and that we’re more likely to eat more food if more is presented, and the fact that home cooked meals are healthier remains. Therefore, when families eat together, obesity in children decreases due to the daily nutritious basis that a home cooked meal provides. Healthy dietary food patterns are also associated with family dinners. With your family, would you go for that slice of cake or a piece of fruit? A survey conducted in 2000 found that “the nine to 14-year-olds who ate dinner with their families most frequently consumed more fruits and vegetables and less soda and fried foods. Their diets also had higher amounts of many key nutrients, like calcium, iron, and fiber” (Mann, Mirele). While this may not be true for all families, it is evident that homemade meals are the go to option.

In conclusion, phone use and skipping family dinners can be a difficult habit to break. We have all become too used to pulling our phone out and hiding behind the screen so we don’t risk putting ourselves on the line with real social interaction. However, there are ways to break this bad habit. Some people put each phone in a basket or bin before sitting down for the meal. Others make the conversation engaging and fun with conversation starters and games. If you can resist the temptation of your device, you may increase your mental and physical health, and the ability to communicate and connect with others around you

Why A Family Meal Is More Important Than Fast Food. (2022, May 03). Retrieved from https://papersowl.com/examples/why-a-family-meal-is-more-important-than-fast-food/

Fast Food: a Friend or Foe

The Dark Side of Fast Food

Here’s how Fast Food Can Affect your Body