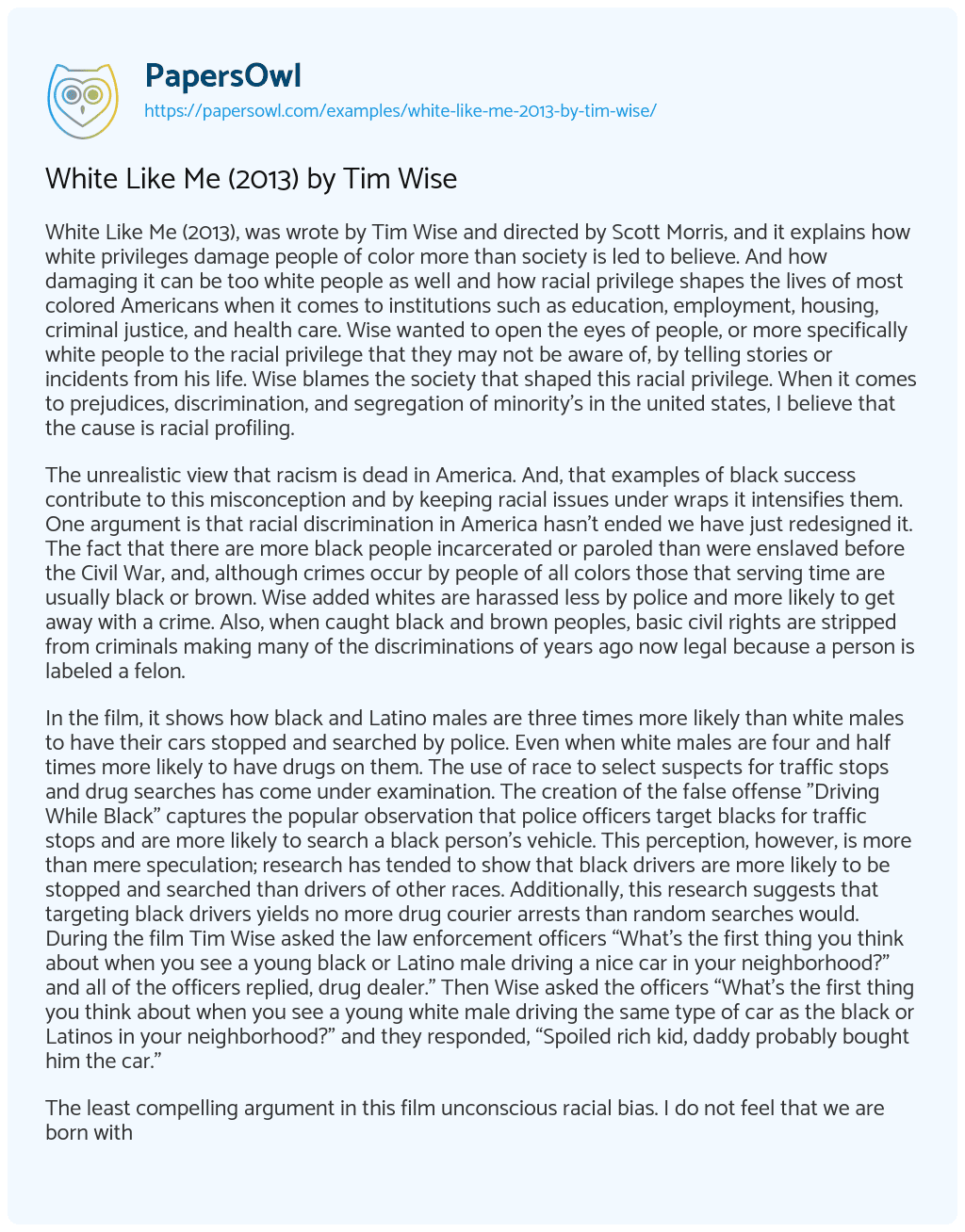 White Like Me (2013), was wrote by Tim Wise and directed by Scott Morris, and it explains how white privileges damage people of color more than society is led to believe. And how damaging it can be too white people as well and how racial privilege shapes the lives of most colored Americans when it comes to institutions such as education, employment, housing, criminal justice, and health care. Wise wanted to open the eyes of people, or more specifically white people to the racial privilege that they may not be aware of, by telling stories or incidents from his life. Wise blames the society that shaped this racial privilege. When it comes to prejudices, discrimination, and segregation of minority’s in the united states, I believe that the cause is racial profiling.

The unrealistic view that racism is dead in America. And, that examples of black success contribute to this misconception and by keeping racial issues under wraps it intensifies them. One argument is that racial discrimination in America hasn’t ended we have just redesigned it. The fact that there are more black people incarcerated or paroled than were enslaved before the Civil War, and, although crimes occur by people of all colors those that serving time are usually black or brown. Wise added whites are harassed less by police and more likely to get away with a crime. Also, when caught black and brown peoples, basic civil rights are stripped from criminals making many of the discriminations of years ago now legal because a person is labeled a felon.

In the film, it shows how black and Latino males are three times more likely than white males to have their cars stopped and searched by police. Even when white males are four and half times more likely to have drugs on them. The use of race to select suspects for traffic stops and drug searches has come under examination. The creation of the false offense “Driving While Black” captures the popular observation that police officers target blacks for traffic stops and are more likely to search a black person’s vehicle. This perception, however, is more than mere speculation; research has tended to show that black drivers are more likely to be stopped and searched than drivers of other races. Additionally, this research suggests that targeting black drivers yields no more drug courier arrests than random searches would. During the film Tim Wise asked the law enforcement officers “What’s the first thing you think about when you see a young black or Latino male driving a nice car in your neighborhood?” and all of the officers replied, drug dealer.” Then Wise asked the officers “What’s the first thing you think about when you see a young white male driving the same type of car as the black or Latinos in your neighborhood?” and they responded, “Spoiled rich kid, daddy probably bought him the car.”

The least compelling argument in this film unconscious racial bias. I do not feel that we are born with a racial bias. I believe it is something that is learned or cultivated over time. For example, prior to the mid-1600s, in the original thirteen colonies, there was no importance placed on whiteness. But by the 1670s, the indentured servitude of Africans was on the rise. So, to keep white European servants and black African servants from forming a rebellion against the upper class, white European servants were given certain privileges that black African servants were not, including land and the ability to testify in court. Which would lead them in to forming racial biases which can be found even today. Like in 2005, the two communities hit hardest by Hurricane Katrina were the lower ninth ward in New Orleans which was 94 percent black and St. Bernard parish which was 95 percent white. Both still had high levels of poverty but when the citizens of St. Bernard Parish were asked who the cause was for the area’s poor economic status, they believed that’s it was the people of color.

An example of the real world interfering on privilege is high school shootings. Since white males almost always commit these acts of violence, members of the targeted communities often react by saying, “This wasn’t supposed to happen here.” When white people perform terrorist acts — as when Timothy McVeigh and Terry Nichols blew up a federal building in Oklahoma City in 1995, killing 168 people, their whiteness is never part of the news story. However, when people of color perform any violent acts, like the 19 Muslims who attacked the World Trade Center, their ethnicity and race dominate media coverage. Also, After the 9/11 terrorist attacks, many people of privilege reacted by saying, “Why do they hate us?” But people of color didn’t react this way. Wise feels as if it’s because people of color tend to be more aware of what others think of them than people of privilege. Before the War in Iraq, when people of color were asked whether to invade Iraq, they said no. Devastatingly, people of privilege said yes. White politicians even said, “They are going to greet us as liberators.” Privilege affects both those who have it and those who do not. It allows our policymakers to act in our name against our interests.

Driving is a Privilege, not a Right