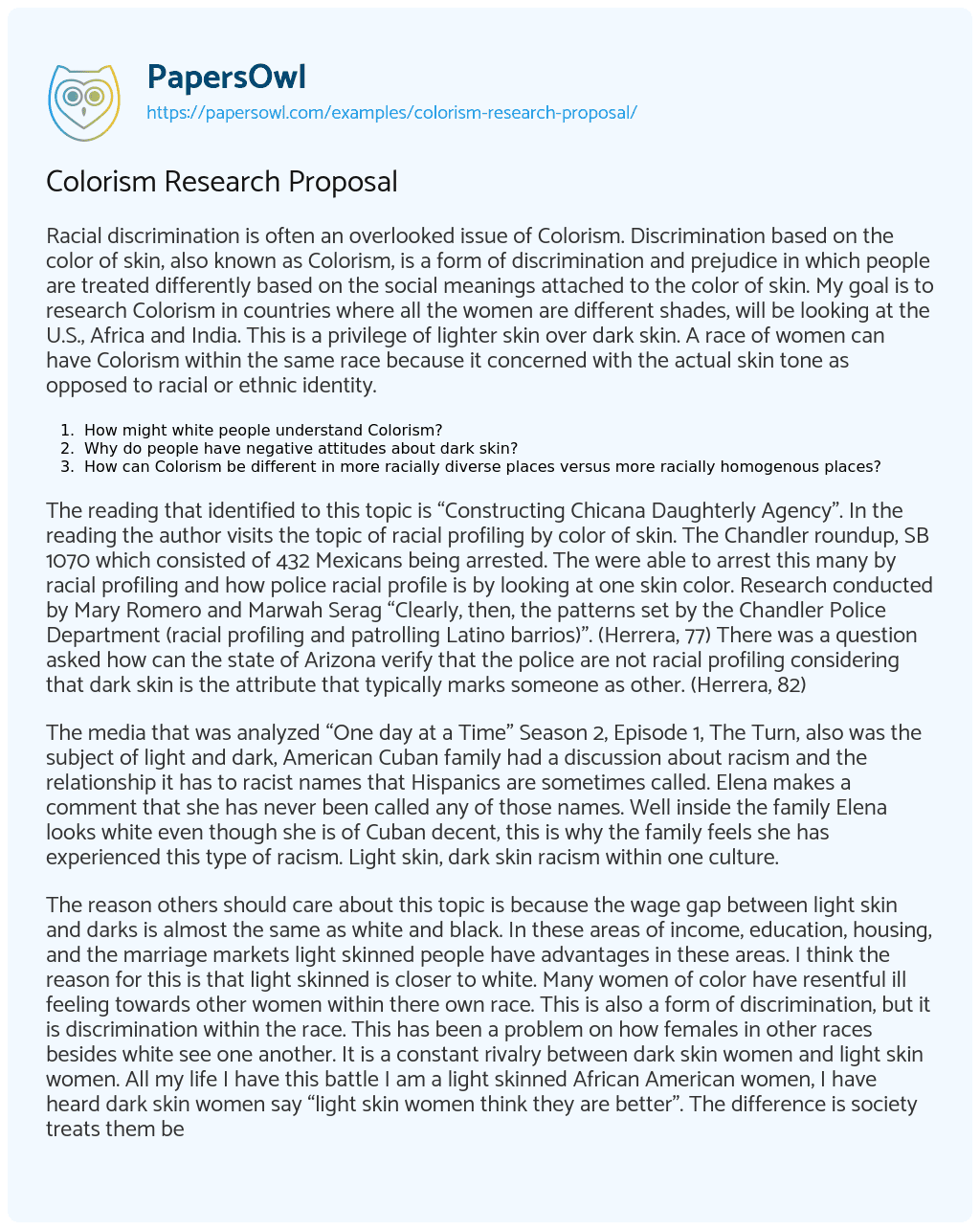 Racial discrimination is often an overlooked issue of Colorism. Discrimination based on the color of skin, also known as Colorism, is a form of discrimination and prejudice in which people are treated differently based on the social meanings attached to the color of skin. My goal is to research Colorism in countries where all the women are different shades, will be looking at the U.S., Africa and India. This is a privilege of lighter skin over dark skin. A race of women can have Colorism within the same race because it concerned with the actual skin tone as opposed to racial or ethnic identity.

The reading that identified to this topic is “Constructing Chicana Daughterly Agency”. In the reading the author visits the topic of racial profiling by color of skin. The Chandler roundup, SB 1070 which consisted of 432 Mexicans being arrested. The were able to arrest this many by racial profiling and how police racial profile is by looking at one skin color. Research conducted by Mary Romero and Marwah Serag “Clearly, then, the patterns set by the Chandler Police Department (racial profiling and patrolling Latino barrios)”. (Herrera, 77) There was a question asked how can the state of Arizona verify that the police are not racial profiling considering that dark skin is the attribute that typically marks someone as other. (Herrera, 82)

The media that was analyzed “One day at a Time” Season 2, Episode 1, The Turn, also was the subject of light and dark, American Cuban family had a discussion about racism and the relationship it has to racist names that Hispanics are sometimes called. Elena makes a comment that she has never been called any of those names. Well inside the family Elena looks white even though she is of Cuban decent, this is why the family feels she has experienced this type of racism. Light skin, dark skin racism within one culture.

The reason others should care about this topic is because the wage gap between light skin and darks is almost the same as white and black. In these areas of income, education, housing, and the marriage markets light skinned people have advantages in these areas. I think the reason for this is that light skinned is closer to white. Many women of color have resentful ill feeling towards other women within there own race. This is also a form of discrimination, but it is discrimination within the race. This has been a problem on how females in other races besides white see one another. It is a constant rivalry between dark skin women and light skin women. All my life I have this battle I am a light skinned African American women, I have heard dark skin women say “light skin women think they are better”. The difference is society treats them better it goes back to slavery. The light skin worked in the masters house and the dark skin worked in the cotton fields.

Influence of Colorism, Racism, or Sexism

Subconsciously Discrimination Based on Skin Color