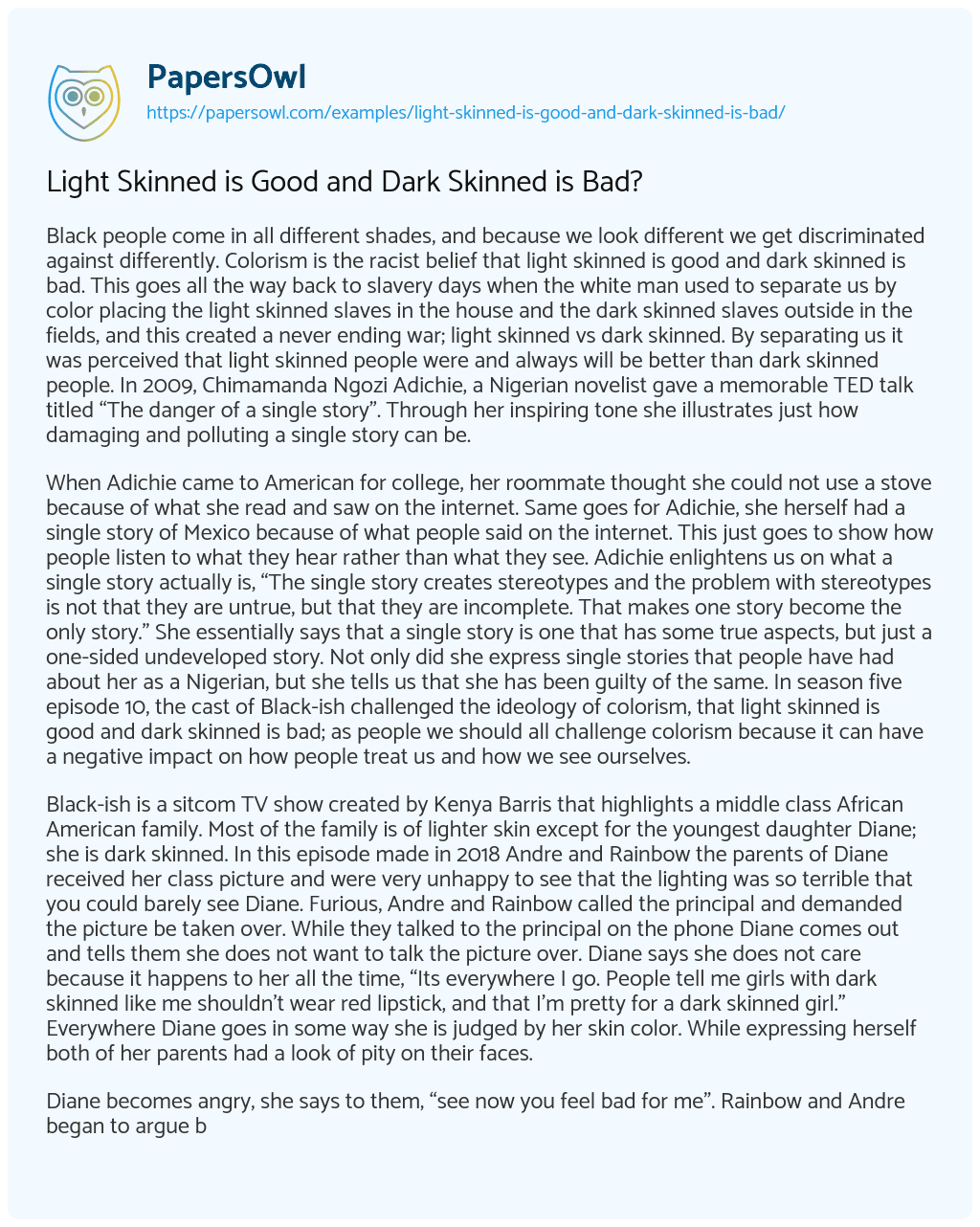 Black people come in all different shades, and because we look different we get discriminated against differently. Colorism is the racist belief that light skinned is good and dark skinned is bad. This goes all the way back to slavery days when the white man used to separate us by color placing the light skinned slaves in the house and the dark skinned slaves outside in the fields, and this created a never ending war; light skinned vs dark skinned. By separating us it was perceived that light skinned people were and always will be better than dark skinned people. In 2009, Chimamanda Ngozi Adichie, a Nigerian novelist gave a memorable TED talk titled “The danger of a single story”. Through her inspiring tone she illustrates just how damaging and polluting a single story can be.

When Adichie came to American for college, her roommate thought she could not use a stove because of what she read and saw on the internet. Same goes for Adichie, she herself had a single story of Mexico because of what people said on the internet. This just goes to show how people listen to what they hear rather than what they see. Adichie enlightens us on what a single story actually is, “The single story creates stereotypes and the problem with stereotypes is not that they are untrue, but that they are incomplete. That makes one story become the only story.” She essentially says that a single story is one that has some true aspects, but just a one-sided undeveloped story. Not only did she express single stories that people have had about her as a Nigerian, but she tells us that she has been guilty of the same. In season five episode 10, the cast of Black-ish challenged the ideology of colorism, that light skinned is good and dark skinned is bad; as people we should all challenge colorism because it can have a negative impact on how people treat us and how we see ourselves.

Black-ish is a sitcom TV show created by Kenya Barris that highlights a middle class African American family. Most of the family is of lighter skin except for the youngest daughter Diane; she is dark skinned. In this episode made in 2018 Andre and Rainbow the parents of Diane received her class picture and were very unhappy to see that the lighting was so terrible that you could barely see Diane. Furious, Andre and Rainbow called the principal and demanded the picture be taken over. While they talked to the principal on the phone Diane comes out and tells them she does not want to talk the picture over. Diane says she does not care because it happens to her all the time, “Its everywhere I go. People tell me girls with dark skinned like me shouldn’t wear red lipstick, and that I’m pretty for a dark skinned girl.” Everywhere Diane goes in some way she is judged by her skin color. While expressing herself both of her parents had a look of pity on their faces.

Diane becomes angry, she says to them, “see now you feel bad for me”. Rainbow and Andre began to argue back and forth about how light skinned people have “Light skinned privilege.” Rainbow is mixed, her mother is black, and her father is white; so, she’s very light. Rainbow does not feel like she has light skinned privilege. Andre tells Rainbow that she’ll never know what hateful discrimination people with darker skin go through. Andre’s mother Ruby, who also lives there, called Diane and they had a family discussion about when she was a child. Ruby shared the story of where she grew up in Louisiana and how all her cousins were light skinned, and she was the only dark skinned one. They made her stay in the house while they played outside. They made Ruby feel so useless, ugly and unwanted; they even made songs about her. “Light skinned is the right skin, but if you’re dark skinned stay in.” Ruby expressed to Diane that she had to learn not to let what people said about her affect how she sees herself, “Dark skin is beautiful”, she says. After their conversation they drove Diane to school and met with the principal. This episode of Black-ish is very powerful.

Colorism is something that we as black people put ourselves through. Instead of us standing together as one race we put ourselves in two different categories, making the blacks of darker skin feel inferior and less wanted than the ones with lighter skin. This is something that was learned from slave owners; we have picked up the behavior of white supremacist. Being dark skinned has always been a struggle. If a dark skinned man gets on an elevator with a white woman, she is more likely to clutch her purse than if it was a good-looking light skinned man. In this episode of Black-ish Andre says that his oldest son Andre Jr may never experience being stopped by the police because of his light skinned. Some white people and even light skinned people take dark skinned people as a threat. They also address that Hollywood magazines only choose one dark skinned women per year to highlight. They were not saying that they do not broadcast black people because they do, and that’s great, but mostly light skinned women.

If people would learn to be their own person and let go of society’s standards they would be able to get the full complex picture. The full complex picture of who we really are; just like everyone else. It’s important for people to get the full story on who we really are because being treated differently when you’re not different is very depressing. It’s the same as when Adichie had the single story of her house boy Fide; she was shocked to see that Fide’s family was more than just poor. “We went to the village to visit and his mother showed me a beautiful patterned basket… I was startled. It had not occurred to me that anyone in his family could actually make something.” This was her single story because she heard nothing about Fide except that he was poor so she thought nothing more. Just like people do today with dark skin people. People only say we cannot wear or do certain things because that’s what they have heard. It crazy because no one thinks for themselves. People will be in utter shock when they see a dark skinned women in neon green or yellow saying, “Wow, I can’t believe she pulled that off.”

This single story can negatively impact someone’s Identity formation. Someone like me, who will try to change everything about themselves to fit into society’s standards, but who could never change the color of her skin. Someone who grew up not thinking she was beautiful enough to be loved; only by her mother. This could not only become a single story of how people view us, but a single story about how we view ourselves. People will grow up and despise their skin color and bleach it later in life. I know plenty of dark skinned women who feel inferior to light skinned women and they shouldn’t, but it’s not their fault. It is society’s fault. Of course this started with racism, but I blame the entire black community for carrying on this hatred for so many years. Putting down our own brothers and sisters because of the color of our skin. Didn’t white people do that already? We are all black it does not matter how light or how dark.

In conclusion, we are all guilty be single stories, no one is perfect. However, who does matter is that you do not let the single story be the only story. Black-ish did a wonderful job in challenging the ideology of colorism, everyone should do the same because it can cause us to treat each other differently and have a negative internal impact on dark skinned people. This is very important to me because I am a dark skinned women and I will have dark skinned children. I would never want my children to experience the treatment I did as a child. To change this single story we need to open our eyes and see how beautiful we are as a race. White people already separate us. We need to stand together. We are all black.

Light Skinned is Good and Dark Skinned is Bad?. (2022, Feb 12). Retrieved from https://papersowl.com/examples/light-skinned-is-good-and-dark-skinned-is-bad/

The Light is Good and the Dark is Bad

Subconsciously Discrimination Based on Skin Color

The Physical and Metaphorical Use of Light