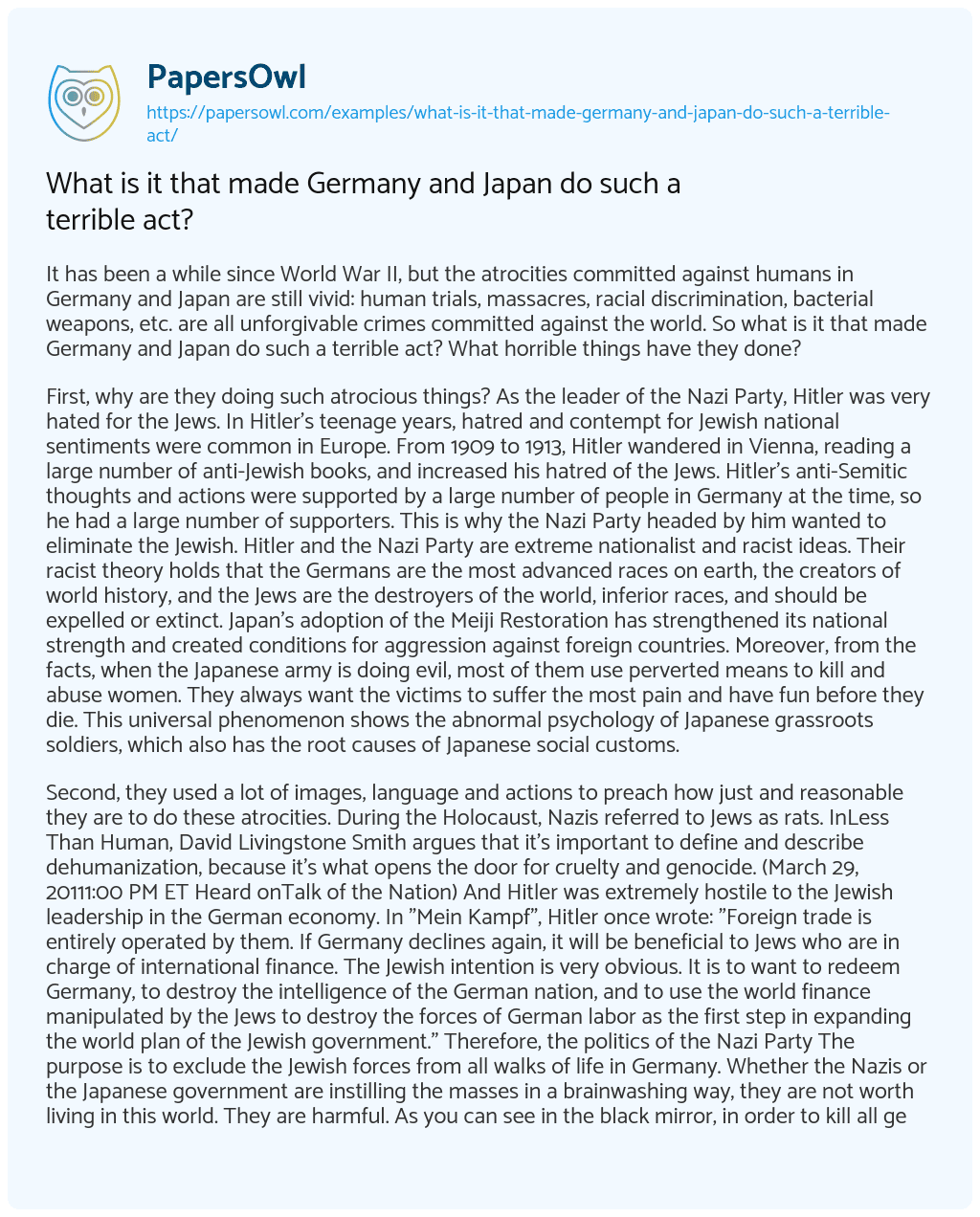 It has been a while since World War II, but the atrocities committed against humans in Germany and Japan are still vivid: human trials, massacres, racial discrimination, bacterial weapons, etc. are all unforgivable crimes committed against the world. So what is it that made Germany and Japan do such a terrible act? What horrible things have they done?

First, why are they doing such atrocious things? As the leader of the Nazi Party, Hitler was very hated for the Jews. In Hitler’s teenage years, hatred and contempt for Jewish national sentiments were common in Europe. From 1909 to 1913, Hitler wandered in Vienna, reading a large number of anti-Jewish books, and increased his hatred of the Jews. Hitler’s anti-Semitic thoughts and actions were supported by a large number of people in Germany at the time, so he had a large number of supporters. This is why the Nazi Party headed by him wanted to eliminate the Jewish. Hitler and the Nazi Party are extreme nationalist and racist ideas. Their racist theory holds that the Germans are the most advanced races on earth, the creators of world history, and the Jews are the destroyers of the world, inferior races, and should be expelled or extinct. Japan’s adoption of the Meiji Restoration has strengthened its national strength and created conditions for aggression against foreign countries. Moreover, from the facts, when the Japanese army is doing evil, most of them use perverted means to kill and abuse women. They always want the victims to suffer the most pain and have fun before they die. This universal phenomenon shows the abnormal psychology of Japanese grassroots soldiers, which also has the root causes of Japanese social customs.

Second, they used a lot of images, language and actions to preach how just and reasonable they are to do these atrocities. During the Holocaust, Nazis referred to Jews as rats. InLess Than Human, David Livingstone Smith argues that it’s important to define and describe dehumanization, because it’s what opens the door for cruelty and genocide. (March 29, 20111:00 PM ET Heard onTalk of the Nation) And Hitler was extremely hostile to the Jewish leadership in the German economy. In “Mein Kampf”, Hitler once wrote: “Foreign trade is entirely operated by them. If Germany declines again, it will be beneficial to Jews who are in charge of international finance. The Jewish intention is very obvious. It is to want to redeem Germany, to destroy the intelligence of the German nation, and to use the world finance manipulated by the Jews to destroy the forces of German labor as the first step in expanding the world plan of the Jewish government.” Therefore, the politics of the Nazi Party The purpose is to exclude the Jewish forces from all walks of life in Germany. Whether the Nazis or the Japanese government are instilling the masses in a brainwashing way, they are not worth living in this world. They are harmful. As you can see in the black mirror, in order to kill all genetically inferior human beings, the government has installed in the minds of the military something that interferes with vision. It’s something more than verbal brainwashing. The Nazis and the Japanese did a lot of inhuman experiments, such as the malaria experiment: after the subjects were infected with malaria, they received various experimental treatments. Many people die as a result of the injection of excess drug. The malaria experiment directly led to the death of 30 people, and 300 to 400 people died indirectly from the sequelae caused by the experiment. There are also bone, muscle and nerve regeneration experiments. The experiment mainly focused on women. The Nazis often deliberately set fire to people in the burn camp, and after using the battlefield to simulate the injury, they used Polygal drugs to test their hemostatic function. Many subjects died in these experiments.They don’t treat these people as human beings at all, or even kill them just for fun. As a conclusion, as shown in the black mirror, the government has found all kinds of reasons for people and the world to justify such atrocities. But that doesn’t hide their behavior. And the development of scientific experiments is not the reason for them to do experiments on living people.

What is it that made Germany and Japan do such a terrible act?. (2019, Jan 10). Retrieved from https://papersowl.com/examples/what-is-it-that-made-germany-and-japan-do-such-a-terrible-act/

Who are the Nazi’s