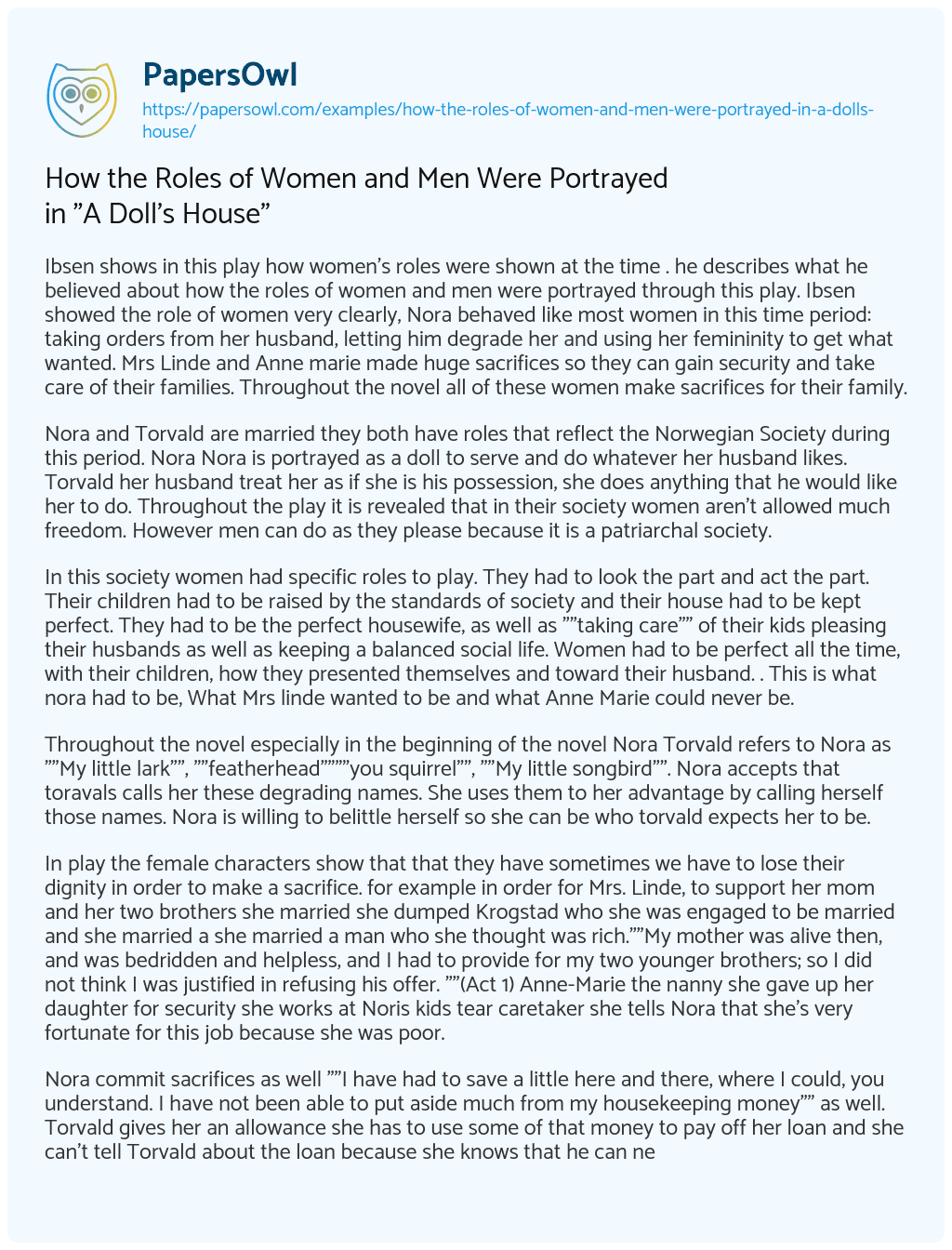 Ibsen shows in this play how women’s roles were shown at the time . he describes what he believed about how the roles of women and men were portrayed through this play. Ibsen showed the role of women very clearly, Nora behaved like most women in this time period: taking orders from her husband, letting him degrade her and using her femininity to get what wanted. Mrs Linde and Anne marie made huge sacrifices so they can gain security and take care of their families. Throughout the novel all of these women make sacrifices for their family.

Nora and Torvald are married they both have roles that reflect the Norwegian Society during this period. Nora Nora is portrayed as a doll to serve and do whatever her husband likes. Torvald her husband treat her as if she is his possession, she does anything that he would like her to do. Throughout the play it is revealed that in their society women aren’t allowed much freedom. However men can do as they please because it is a patriarchal society.

In this society women had specific roles to play. They had to look the part and act the part. Their children had to be raised by the standards of society and their house had to be kept perfect. They had to be the perfect housewife, as well as “”taking care”” of their kids pleasing their husbands as well as keeping a balanced social life. Women had to be perfect all the time, with their children, how they presented themselves and toward their husband. . This is what nora had to be, What Mrs linde wanted to be and what Anne Marie could never be.

Throughout the novel especially in the beginning of the novel Nora Torvald refers to Nora as “”My little lark””, “”featherhead””””you squirrel””, “”My little songbird””. Nora accepts that toravals calls her these degrading names. She uses them to her advantage by calling herself those names. Nora is willing to belittle herself so she can be who torvald expects her to be.

In play the female characters show that that they have sometimes we have to lose their dignity in order to make a sacrifice. for example in order for Mrs. Linde, to support her mom and her two brothers she married she dumped Krogstad who she was engaged to be married and she married a she married a man who she thought was rich.””My mother was alive then, and was bedridden and helpless, and I had to provide for my two younger brothers; so I did not think I was justified in refusing his offer. “”(Act 1) Anne-Marie the nanny she gave up her daughter for security she works at Noris kids tear caretaker she tells Nora that she’s very fortunate for this job because she was poor.

Nora commit sacrifices as well “”I have had to save a little here and there, where I could, you understand. I have not been able to put aside much from my housekeeping money”” as well. Torvald gives her an allowance she has to use some of that money to pay off her loan and she can’t tell Torvald about the loan because she knows that he can never except the idea that his wife, a woman who is degraded in society, has helped save his life but she has to pay it off.

However In this society women can’t do their own businesses or control their own money because they need permission of the man who is the owner of the women. for example nora t commited a crime because she took a loan without permission the permission of her husband. also they aren’t they are considered not educated for responsibility Nora however she couldn’t really follow the rules because she took a loan from the bank without toilets for mission arm that is why that is why Krogstad is able to come to continue blackmailing her because he hasn’t been over her.

It seems that single women- Mrs. linde, had more freedom than the married women. They made their own money and didn’t have to hand it over, they could do whatever they wanted at their own will. However the jobs available were retail, working as a made and working as a teacher and the pay that women received was very low, just like in Mrs. linde’s case. This is why Mrs. linde wanted Nora to find her a Job where her husband worked. “”Nora :you mean that perhaps Torvald could get you something to do.”” “”Mrs Linde. Yes, that was what I was thinking of. If she could find a job then she could be more stable. This can be seen as a sacrifice because Mrs. Linde is giving up her dignity to ask Nora for a job.

In a doll house women have specific roles in society whether they are married or not they have a role. Throughout the play we see that these women Nora, Anne Marie and Mrs. Lindy would do what they can in order to live sustainably in this society. Mrs linde married a man she did not love to take care of her sick mother, anne marie gave up her daughter to take care of other people’s kids for money and nora sacrificed herself to save her husband. She loses and her children and sacrificed her marriage to find her identity. All these women sacrificed something for financial stability.

How the Roles of Women and Men Were Portrayed in "A Doll's House". (2019, Sep 17). Retrieved from https://papersowl.com/examples/how-the-roles-of-women-and-men-were-portrayed-in-a-dolls-house/

“A Doll’s House” as a Modern Tragedy