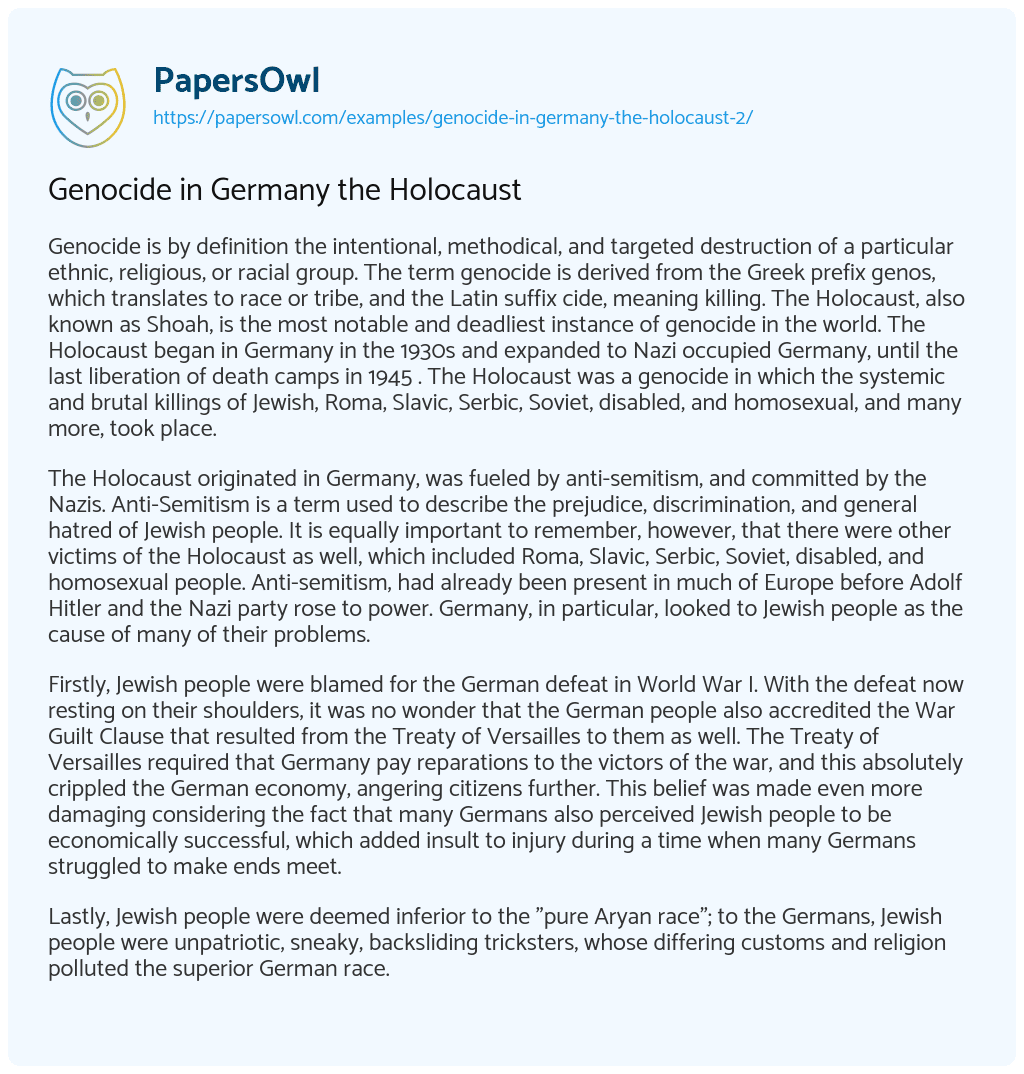 Genocide is by definition the intentional, methodical, and targeted destruction of a particular ethnic, religious, or racial group. The term genocide is derived from the Greek prefix genos, which translates to race or tribe, and the Latin suffix cide, meaning killing. The Holocaust, also known as Shoah, is the most notable and deadliest instance of genocide in the world. The Holocaust began in Germany in the 1930s and expanded to Nazi occupied Germany, until the last liberation of death camps in 1945 . The Holocaust was a genocide in which the systemic and brutal killings of Jewish, Roma, Slavic, Serbic, Soviet, disabled, and homosexual, and many more, took place.

The Holocaust originated in Germany, was fueled by anti-semitism, and committed by the Nazis. Anti-Semitism is a term used to describe the prejudice, discrimination, and general hatred of Jewish people. It is equally important to remember, however, that there were other victims of the Holocaust as well, which included Roma, Slavic, Serbic, Soviet, disabled, and homosexual people. Anti-semitism, had already been present in much of Europe before Adolf Hitler and the Nazi party rose to power. Germany, in particular, looked to Jewish people as the cause of many of their problems.

Firstly, Jewish people were blamed for the German defeat in World War I. With the defeat now resting on their shoulders, it was no wonder that the German people also accredited the War Guilt Clause that resulted from the Treaty of Versailles to them as well. The Treaty of Versailles required that Germany pay reparations to the victors of the war, and this absolutely crippled the German economy, angering citizens further. This belief was made even more damaging considering the fact that many Germans also perceived Jewish people to be economically successful, which added insult to injury during a time when many Germans struggled to make ends meet.

Genocide in Germany the Holocaust. (2020, Feb 15). Retrieved from https://papersowl.com/examples/genocide-in-germany-the-holocaust-2/

Why did the Holocaust Happen?