Who are the Nazi’s 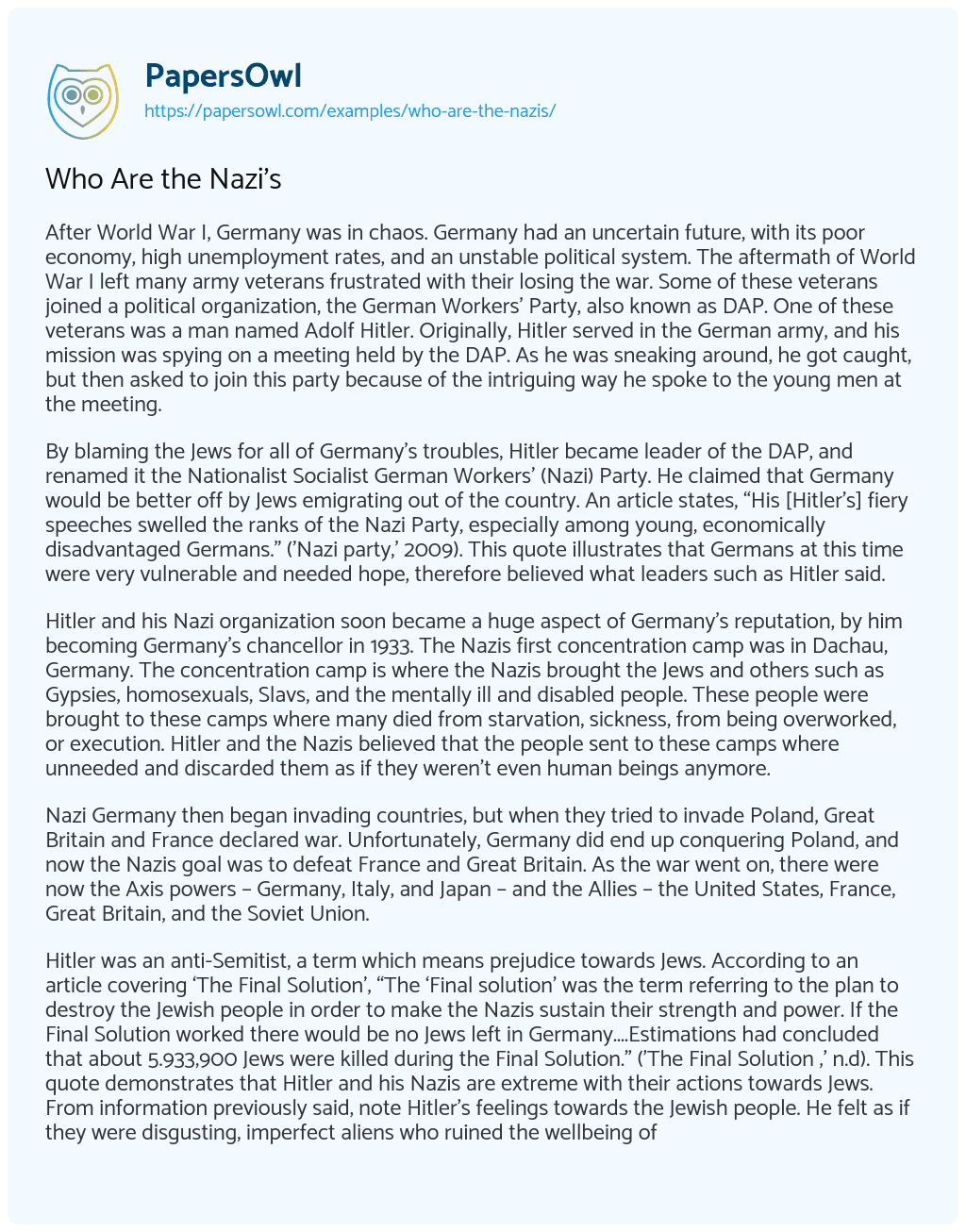 After World War I, Germany was in chaos. Germany had an uncertain future, with its poor economy, high unemployment rates, and an unstable political system. The aftermath of World War I left many army veterans frustrated with their losing the war. Some of these veterans joined a political organization, the German Workers’ Party, also known as DAP. One of these veterans was a man named Adolf Hitler. Originally, Hitler served in the German army, and his mission was spying on a meeting held by the DAP. As he was sneaking around, he got caught, but then asked to join this party because of the intriguing way he spoke to the young men at the meeting.

By blaming the Jews for all of Germany’s troubles, Hitler became leader of the DAP, and renamed it the Nationalist Socialist German Workers’ (Nazi) Party. He claimed that Germany would be better off by Jews emigrating out of the country. An article states, “His [Hitler’s] fiery speeches swelled the ranks of the Nazi Party, especially among young, economically disadvantaged Germans.” (‘Nazi party,’ 2009). This quote illustrates that Germans at this time were very vulnerable and needed hope, therefore believed what leaders such as Hitler said.

Hitler and his Nazi organization soon became a huge aspect of Germany’s reputation, by him becoming Germany’s chancellor in 1933. The Nazis first concentration camp was in Dachau, Germany. The concentration camp is where the Nazis brought the Jews and others such as Gypsies, homosexuals, Slavs, and the mentally ill and disabled people. These people were brought to these camps where many died from starvation, sickness, from being overworked, or execution. Hitler and the Nazis believed that the people sent to these camps where unneeded and discarded them as if they weren’t even human beings anymore.

Nazi Germany then began invading countries, but when they tried to invade Poland, Great Britain and France declared war. Unfortunately, Germany did end up conquering Poland, and now the Nazis goal was to defeat France and Great Britain. As the war went on, there were now the Axis powers – Germany, Italy, and Japan – and the Allies – the United States, France, Great Britain, and the Soviet Union.

Hitler was an anti-Semitist, a term which means prejudice towards Jews. According to an article covering ‘The Final Solution’, “The ‘Final solution’ was the term referring to the plan to destroy the Jewish people in order to make the Nazis sustain their strength and power. If the Final Solution worked there would be no Jews left in Germany….Estimations had concluded that about 5.933,900 Jews were killed during the Final Solution.” (‘The Final Solution ,’ n.d). This quote demonstrates that Hitler and his Nazis are extreme with their actions towards Jews. From information previously said, note Hitler’s feelings towards the Jewish people. He felt as if they were disgusting, imperfect aliens who ruined the wellbeing of Germany.

In Europe, World War II ended when Germany surrendered in May 1945, and now those days are celebrated as Victory in Europe Day, or V-E Day. Germany surrendered after Hitler committed suicide, April 30, 1945. A quote that further explains, “Command of the German forces passed to Adm. Karl Doenitz, and he quickly sent out peace feelers. He soon realized an unconditional surrender would be required, and he was ready to sign.” (Wilde, 2018). These quotes show that Hitler gave up when things got difficult and left behind his struggles. After the war, the Allies powers outlawed the Nazi Party, and their flag now became a symbol of evil. The war in the East ended August 14, 1945 when the United States bombed Japan, using atomic bombs, forcing Japan to surrender. Victory Over Japan Day, or V-J Day, is the celebration of the day the Japanese surrendered.

Many Jews feared the Nazis and went into hiding during the years of the Holocaust. One example is Anne Frank and her family, along with the Van Daans. These innocent people feared that the Nazis would take them to concentration camps. When the Frank’s went into hiding, Anne kept a diary that described the harsh and miserable living conditions her and her family persevered through. For twenty-five months, the families in hiding had to stay silent during the day and had a limited supply of food and other products. The Nazis were the main reason why the years of World War II were horrible times for Jews.

In conclusion, the Nazis were members of the Nationalist Socialist German Workers’ Party. The members of this party were anti-Semitism and believed that Jews were imperfect human beings. The Nazis were the one that dragged the Jews and others to the concentration camps where many passed away from sickness and starvation. Thankfully, the Nazi Party is now outlawed although some people still believe the ideas promoted by the Nazi organization. All in all, the years of the Nazi Party was a dark time in European history and thankfully we have learned from our mistakes.