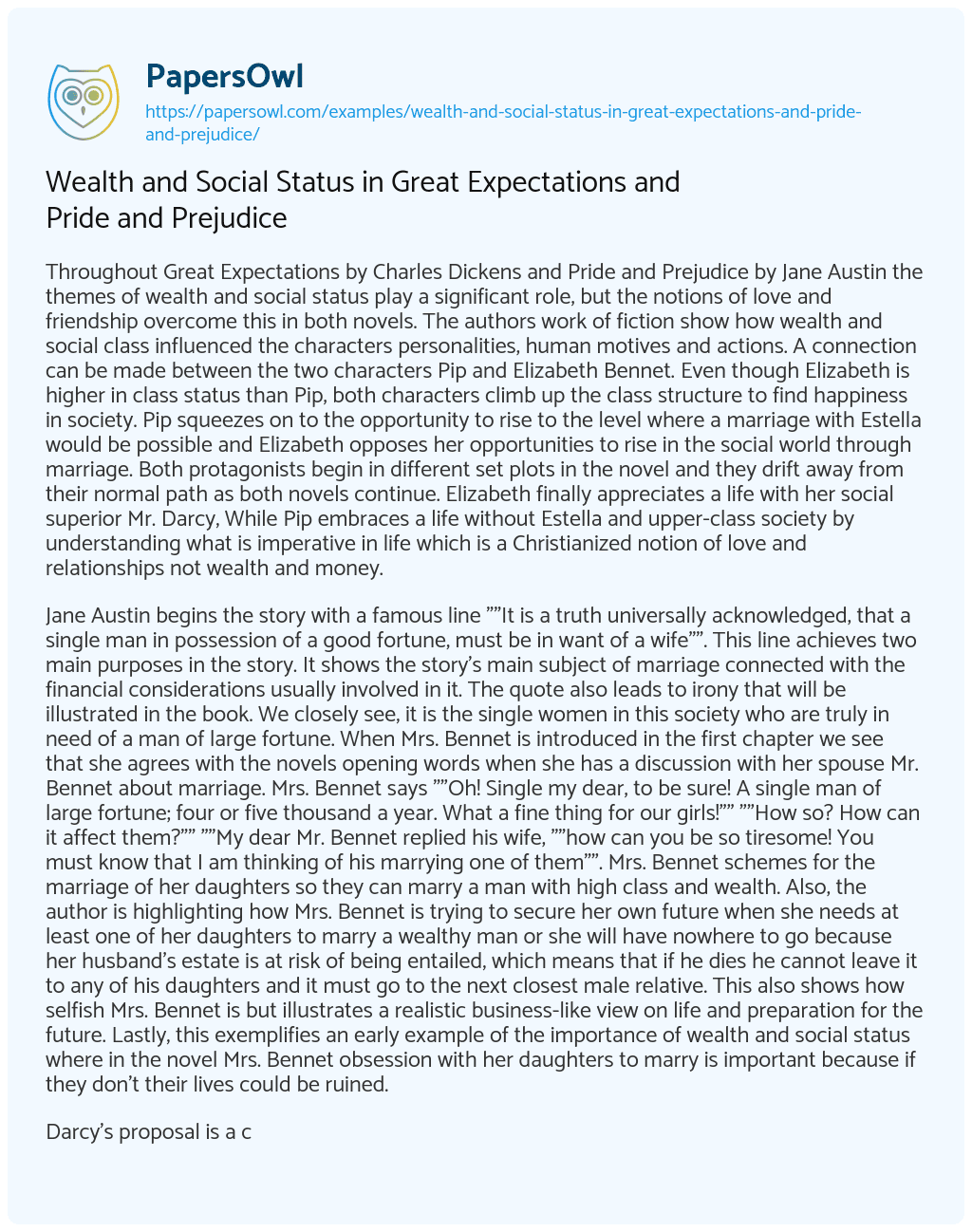 Throughout Great Expectations by Charles Dickens and Pride and Prejudice by Jane Austin the themes of wealth and social status play a significant role, but the notions of love and friendship overcome this in both novels. The authors work of fiction show how wealth and social class influenced the characters personalities, human motives and actions. A connection can be made between the two characters Pip and Elizabeth Bennet. Even though Elizabeth is higher in class status than Pip, both characters climb up the class structure to find happiness in society. Pip squeezes on to the opportunity to rise to the level where a marriage with Estella would be possible and Elizabeth opposes her opportunities to rise in the social world through marriage. Both protagonists begin in different set plots in the novel and they drift away from their normal path as both novels continue. Elizabeth finally appreciates a life with her social superior Mr. Darcy, While Pip embraces a life without Estella and upper-class society by understanding what is imperative in life which is a Christianized notion of love and relationships not wealth and money.

Jane Austin begins the story with a famous line “”It is a truth universally acknowledged, that a single man in possession of a good fortune, must be in want of a wife””. This line achieves two main purposes in the story. It shows the story’s main subject of marriage connected with the financial considerations usually involved in it. The quote also leads to irony that will be illustrated in the book. We closely see, it is the single women in this society who are truly in need of a man of large fortune. When Mrs. Bennet is introduced in the first chapter we see that she agrees with the novels opening words when she has a discussion with her spouse Mr. Bennet about marriage. Mrs. Bennet says “”Oh! Single my dear, to be sure! A single man of large fortune; four or five thousand a year. What a fine thing for our girls!”” “”How so? How can it affect them?”” “”My dear Mr. Bennet replied his wife, “”how can you be so tiresome! You must know that I am thinking of his marrying one of them””. Mrs. Bennet schemes for the marriage of her daughters so they can marry a man with high class and wealth. Also, the author is highlighting how Mrs. Bennet is trying to secure her own future when she needs at least one of her daughters to marry a wealthy man or she will have nowhere to go because her husband’s estate is at risk of being entailed, which means that if he dies he cannot leave it to any of his daughters and it must go to the next closest male relative. This also shows how selfish Mrs. Bennet is but illustrates a realistic business-like view on life and preparation for the future. Lastly, this exemplifies an early example of the importance of wealth and social status where in the novel Mrs. Bennet obsession with her daughters to marry is important because if they don’t their lives could be ruined.

Darcy’s proposal is a complete disaster and he is in disbelief when Elizabeth releases her anger and refuses to marry him. Darcy says, “”even though I object to your family and social position tour personal charms are so great that I am overlooking all that””. While Darcy does state his feeling to Elizabeth he ruins it all by using money and social rank which shadows all of his words by also saying that he loves her despite her family’s social status to his own. Since Elizabeth knows that she has a prejudice towards Darcy she knows that she will reject him even before he finishes his proposal. Elizabeth calls out each of his flaws in his proposal and points out that his words are offensive. Right after Darcy explains his feelings to Elizabeth she says, “”why with so evident a design of offending and insulting me, you chose to tell me that you liked me against your will, against your reason, and even against your character””. Elizabeth’s opinion is rather straight forward she thinks Darcy present and past behavior and treatment of her leave a lot to be looked-for, but it is also Darcy’s behavior regarding those around him. Her perception towards Darcy which is a misconception is that he is rude, arrogant, and wicked. Overall her thoughts towards Darcy’s proposal is that there is nothing for her in his character that would even make her say yes.

By the end of Pride and Prejudice, Elizabeth’s true emotions emerge when she mistakenly misjudges Mr. Darcy. In detail, it shows that Elizabeth did not quickly fall in love with Darcy in the beginning of the novel. Somewhat, it becomes clear that her love was growing through the novel, even though she was blinded from seeing it. The most important part of Elizabeth’s and Darcy’s relationship is when she goes to visit Pemberley. The author says “”Elizabeth’s mind was too full for conversation, but she saw and admired every remarkable spot and point of view. They gradually ascended for half a mile, and then found themselves at the top of a considerable eminence, where the wood ceased, and the eye was instantly caught by Pemberley house, situated on the opposite side of a valley, into which the road with some abruptness wound. It was a large, handsome, stone building, standing well on rising ground””. This scene serves as a metaphor for Darcy and is a turning point for Elizabeth’s character, since it puts her in a situation to confront her feelings. Even before she sees Darcy, Elizabeth falls in love with Pemberley and imagines herself living there. The author illustrates the existence and validity of social status. The words the author uses for this scene is large, handsome, stone building which relates to Mr. Darcy and leads to Elizabeth significant change of heart while she is imagining herself as mistress of the estate. We can see that Elizabeth is seduced by Mr. Darcy’s wealth but what I believe what over comes this is the way in which Darcy has changed his behavior. When Mrs. Gardiners response to Elizabeth arrives, she says “”They met several times.

Wealth and Social Status in Great Expectations and Pride and Prejudice. (2019, Oct 31). Retrieved from https://papersowl.com/examples/wealth-and-social-status-in-great-expectations-and-pride-and-prejudice/

Women’s Rights in Pride and Prejudice