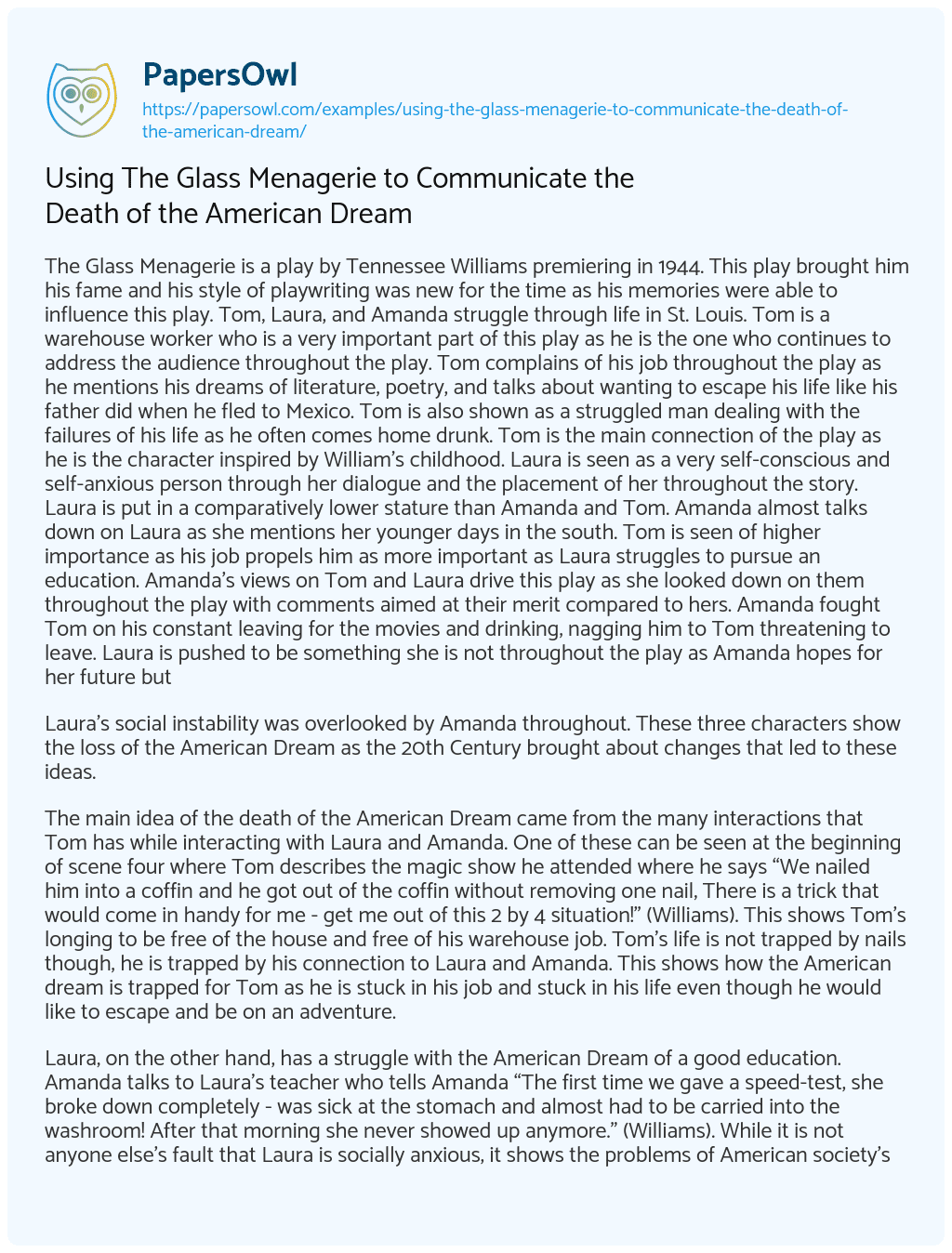 The Glass Menagerie is a play by Tennessee Williams premiering in 1944. This play brought him his fame and his style of playwriting was new for the time as his memories were able to influence this play. Tom, Laura, and Amanda struggle through life in St. Louis. Tom is a warehouse worker who is a very important part of this play as he is the one who continues to address the audience throughout the play. Tom complains of his job throughout the play as he mentions his dreams of literature, poetry, and talks about wanting to escape his life like his father did when he fled to Mexico. Tom is also shown as a struggled man dealing with the failures of his life as he often comes home drunk. Tom is the main connection of the play as he is the character inspired by William’s childhood. Laura is seen as a very self-conscious and self-anxious person through her dialogue and the placement of her throughout the story. Laura is put in a comparatively lower stature than Amanda and Tom. Amanda almost talks down on Laura as she mentions her younger days in the south. Tom is seen of higher importance as his job propels him as more important as Laura struggles to pursue an education. Amanda’s views on Tom and Laura drive this play as she looked down on them throughout the play with comments aimed at their merit compared to hers. Amanda fought Tom on his constant leaving for the movies and drinking, nagging him to Tom threatening to leave. Laura is pushed to be something she is not throughout the play as Amanda hopes for her future but

Laura’s social instability was overlooked by Amanda throughout. These three characters show the loss of the American Dream as the 20th Century brought about changes that led to these ideas.

The main idea of the death of the American Dream came from the many interactions that Tom has while interacting with Laura and Amanda. One of these can be seen at the beginning of scene four where Tom describes the magic show he attended where he says “We nailed him into a coffin and he got out of the coffin without removing one nail, There is a trick that would come in handy for me – get me out of this 2 by 4 situation!” (Williams). This shows Tom’s longing to be free of the house and free of his warehouse job. Tom’s life is not trapped by nails though, he is trapped by his connection to Laura and Amanda. This shows how the American dream is trapped for Tom as he is stuck in his job and stuck in his life even though he would like to escape and be on an adventure.

Laura, on the other hand, has a struggle with the American Dream of a good education. Amanda talks to Laura’s teacher who tells Amanda “The first time we gave a speed-test, she broke down completely – was sick at the stomach and almost had to be carried into the washroom! After that morning she never showed up anymore.” (Williams). While it is not anyone else’s fault that Laura is socially anxious, it shows the problems of American society’s rejection of people. Laura dreads this rejection and therefore not able to accomplish her dreams showing the death of her dream of education. Laura also struggles with the expectation of her mother placed on her. While Tom is more supportive of Laura, Amanda repeatedly shuts down Laura’s education with Laura marrying into a family. Laura is a character that shows the death of the American dream through her lines throughout the play showing her as a reserved quiet person stuck under more dominant people. Amanda is completely different from her two kids as she portrays a much different type of the American Dream. Amanda uses her position of power to destroy the dreams of her kids. While she does not directly say this at any point throughout the play, she uses subtle hints through every dinner scene to show this relationship. Amanda tells Tom at one dinner scene “Most young men find adventure in their careers.” (Williams). Amanda is a perfect example of someone who destroys the American dream for others, and the quotation from the previous sentence proves this link between Amanda and her kids. These three factors all show how the American Dream has been destroyed in The Glass Menagerie.

The ideas of adventure, education, and power can all be seen in The Glass Menagerie with the idea of the American Dream in the 1931 book “Epic of America” by James Adams relating to the ideas from the play. The idea of the American Dream was meant to speak to immigrants originally as a means of wanting to come over to America, but the definition has changed over time. The original meaning of the book according to the writer “The American Dream is that dream of a land in which life should be better and richer and fuller for everyone, with opportunity for each according to ability or achievement.” (Adams) The current definition is of the American Dream is mostly economic as Jim Luke a teacher of economic theory said: “Do better than Dad.”” Namely, income and wealth for each succeeding generation should be significantly higher. In inflation-adjusted terms, sons and daughters should make more money and have more wealth than their dad or mother did at the same age. Homeownership – Americans should have their own property -usually a freestanding house. Upward mobility – it should be possible through the strength of character and hard work – “merit” – to rise up to higher income and social classes than what a person was born into. This is the classic Horatio Alger story.” (Luke). This quote from Luke shows the change over time that Americans have faced with life becoming more about material possessions and wealth. This translates to the ideas of the play in Tom’s life. Tom struggles to free himself from the factory job that holds him to his material possessions. This is the trap that Tom falls into as his dreams of adventure will never be accomplished as he is stuck in his warehouse job.

Laura’s loss of education in favor of marriage is decided by Amanda, not Laura. This shows the continual presence of Amanda in the decision making for Laura. The dream of education for Laura was achievable in this time period as post World War Two America. Linda Eisenmann wrote a book called “Higher Education for Women in Postwar America, 1945–1965” in which she stated, “During the twenty years after World War II, higher education expanded in all directions, including size of enrollments, numbers of institutions, predominance of the public sector, and overall spending.’ (Eisenmann 51). This quote shows that there were opportunities for Laura in the field of education in 1944 but her social anxiety pulled her away from achieving her American Dream. As her education was stripped away from her, Amanda wanted Laura to be surrounded by men looking to take her hand in marriage.

Amanda’s dominance of the family shut down the American Dream for her kids. Amanda can be compared to the upper class in this situation. In the play, she mentions her time in her younger days and how she worked her way to where she is now in the story. She shows this journey when she tells Laura “One Sunday afternoon in Blue Mountain, your mother received seventeen gentlemen callers! Why, sometimes there weren’t chairs enough to accommodate them all.” (Williams). This can be compared to how the rich glorify their way to the top of society with stories that seem like they went through the trouble to get to the top when really the only thing that the rich do is hold people down from reaching their own American Dream. In an article written by Mackenzie McDowell called the widening gap between the rich and poor as the reason for the death of the American dream by saying “Today the United States faces one of its largest problems in the widening gap between the rich and the poor and because of this, the American dream as we know it, is dead.” (McDowell). The portrayal of Amanda as the rich holding down the dreams of Tom and Laura shows how important this gap is to the American Dream.

All of these characters show the decline of the American dream as their respective roles all point to the idea of change. Each character wants something to change but Tom and Laura do not know how to break out of their life while Amanda does not help push them. Tom’s failure to start his adventures will cause him mediocrity throughout his life as he will never become more than he wants to become as he seems more than happy going to the movies as his only adventure. Laura will stop pursuing her education as she gets married and conforms to the gender norms of 1940s society. This shows how the American Dream will die in these two characters and just like the many others struggle with the monotony of their life. The American Dream is about changing your life to achieve higher success and unfortunately, all of these characters will not be able to achieve the American Dream.

Using The Glass Menagerie to Communicate the Death of the American Dream. (2021, Mar 18). Retrieved from https://papersowl.com/examples/using-the-glass-menagerie-to-communicate-the-death-of-the-american-dream/

Imitation and Action in “The Glass Menagerie”