Understanding Feminism on a Deeper Level 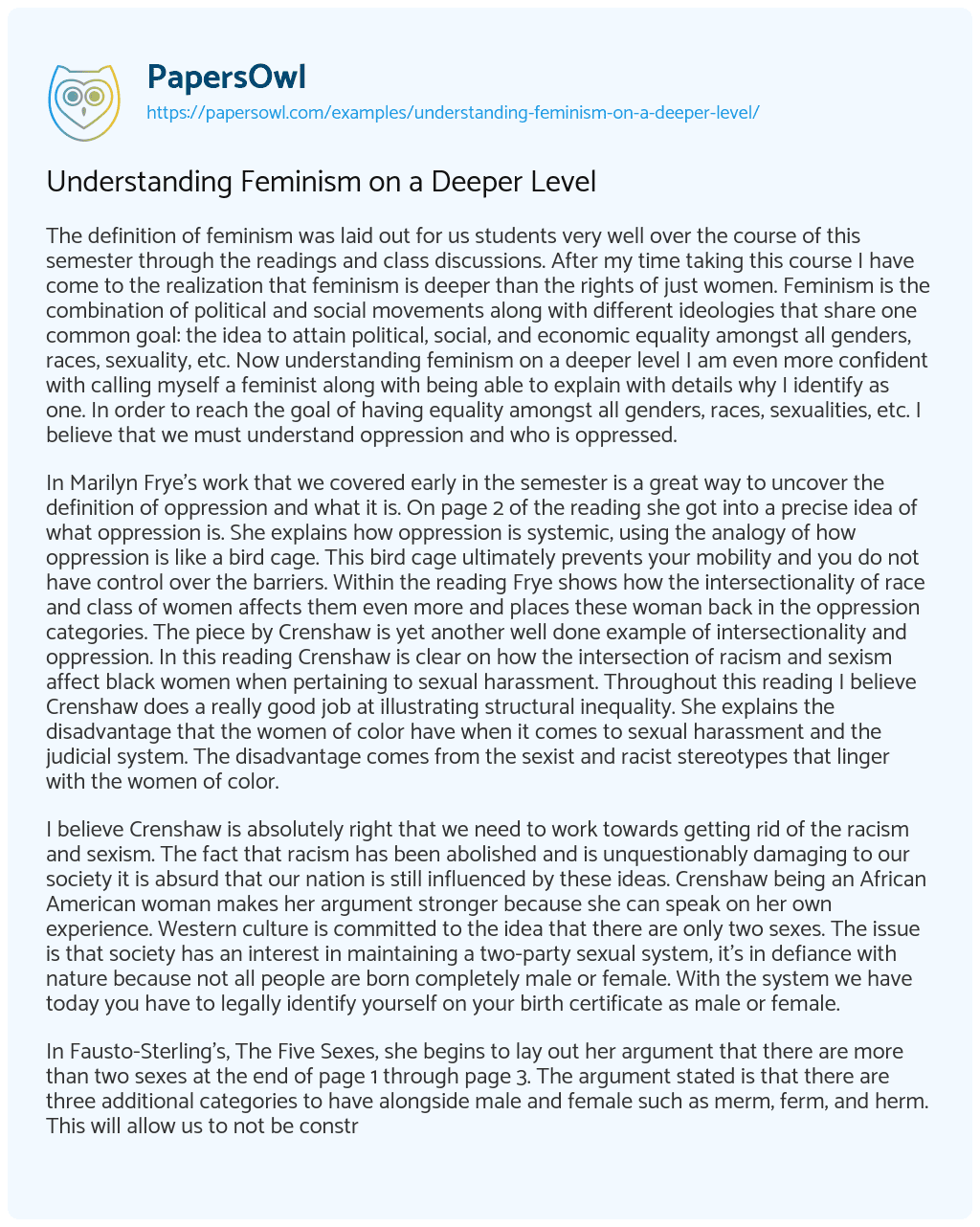 The definition of feminism was laid out for us students very well over the course of this semester through the readings and class discussions. After my time taking this course I have come to the realization that feminism is deeper than the rights of just women. Feminism is the combination of political and social movements along with different ideologies that share one common goal: the idea to attain political, social, and economic equality amongst all genders, races, sexuality, etc. Now understanding feminism on a deeper level I am even more confident with calling myself a feminist along with being able to explain with details why I identify as one. In order to reach the goal of having equality amongst all genders, races, sexualities, etc. I believe that we must understand oppression and who is oppressed.

In Marilyn Frye’s work that we covered early in the semester is a great way to uncover the definition of oppression and what it is. On page 2 of the reading she got into a precise idea of what oppression is. She explains how oppression is systemic, using the analogy of how oppression is like a bird cage. This bird cage ultimately prevents your mobility and you do not have control over the barriers. Within the reading Frye shows how the intersectionality of race and class of women affects them even more and places these woman back in the oppression categories. The piece by Crenshaw is yet another well done example of intersectionality and oppression. In this reading Crenshaw is clear on how the intersection of racism and sexism affect black women when pertaining to sexual harassment. Throughout this reading I believe Crenshaw does a really good job at illustrating structural inequality. She explains the disadvantage that the women of color have when it comes to sexual harassment and the judicial system. The disadvantage comes from the sexist and racist stereotypes that linger with the women of color.

I believe Crenshaw is absolutely right that we need to work towards getting rid of the racism and sexism. The fact that racism has been abolished and is unquestionably damaging to our society it is absurd that our nation is still influenced by these ideas. Crenshaw being an African American woman makes her argument stronger because she can speak on her own experience. Western culture is committed to the idea that there are only two sexes. The issue is that society has an interest in maintaining a two-party sexual system, it’s in defiance with nature because not all people are born completely male or female. With the system we have today you have to legally identify yourself on your birth certificate as male or female.

In Fausto-Sterling’s, The Five Sexes, she begins to lay out her argument that there are more than two sexes at the end of page 1 through page 3. The argument stated is that there are three additional categories to have alongside male and female such as merm, ferm, and herm. This will allow us to not be constrained to just the two sexes. Later Sterling goes on to say that sex is vast and it defies the constraints of five categories. I agree that we need to change how the system works and enable more options rather than just male and female. On page 221 in How to Build a Man I believe there is a great example on how we have gender inequality beliefs within our society. Sterling is talking about a boy being born with a tiny penis and the doctors go on to perform a surgery to create a female. They do this because it’s a social emergency and that it’s better to have an imperfect female rather than a male. I believe this is a form of gender inequality because we as a society see females as imperfect.

Therefore we see them as less than a male or even inferior. Going back to the classification of sex, enabling the additional five categories will prevent doctors from having to feel the need to perform this so called social emergency surgery. The excerpt “The Birth of the Self-made Man” from Michael Kimmel’s book Manhood in America emphasizes the role of masculinity during the 19th century and how this role made a significant impact on how men behaved during this era. Men during the 19th century were expected to keep up a “masculine” performance in order to be seen as a “real” man to their peers. This is established from page 137-141. Kimmel tends to bring up that the prospective of society during the 1800’s-early 1900s perceived the image of a “real” man to be a wealthy, native born European being in control of their own life; both physically and emotionally.

Throughout the reading, Kimmel puts great emphasis on how the socioeconomic backgrounds of men in America were deeply rooted into the notions of masculinity; so much so that men were deemed as less significant or even subhuman if missing just one key component of what was required to be a perceived as a true man. It is clear that Kimmel does not agree with this problematic perception of masculinity based on his academic background and beliefs.

However, I think he does a great job explaining the historical facts while simultaneously integrating his own thoughts behind his main point without completely ridiculing how masculinity was viewed at this time. The only weakness I could note from the excerpt is that Michael Kimmel is a wealthy male of European decent while critiquing men in similar positions. He lacks experience as a marginalized group and at times he comes off as if he is speaking on behalf of their struggles. Kimmel allows us to see that many of the social issues we have today pertaining to feminism come back to these old-fashioned ideas of masculinity.

Understanding Feminism on a Deeper Level. (2021, Apr 03). Retrieved from https://papersowl.com/examples/understanding-feminism-on-a-deeper-level/