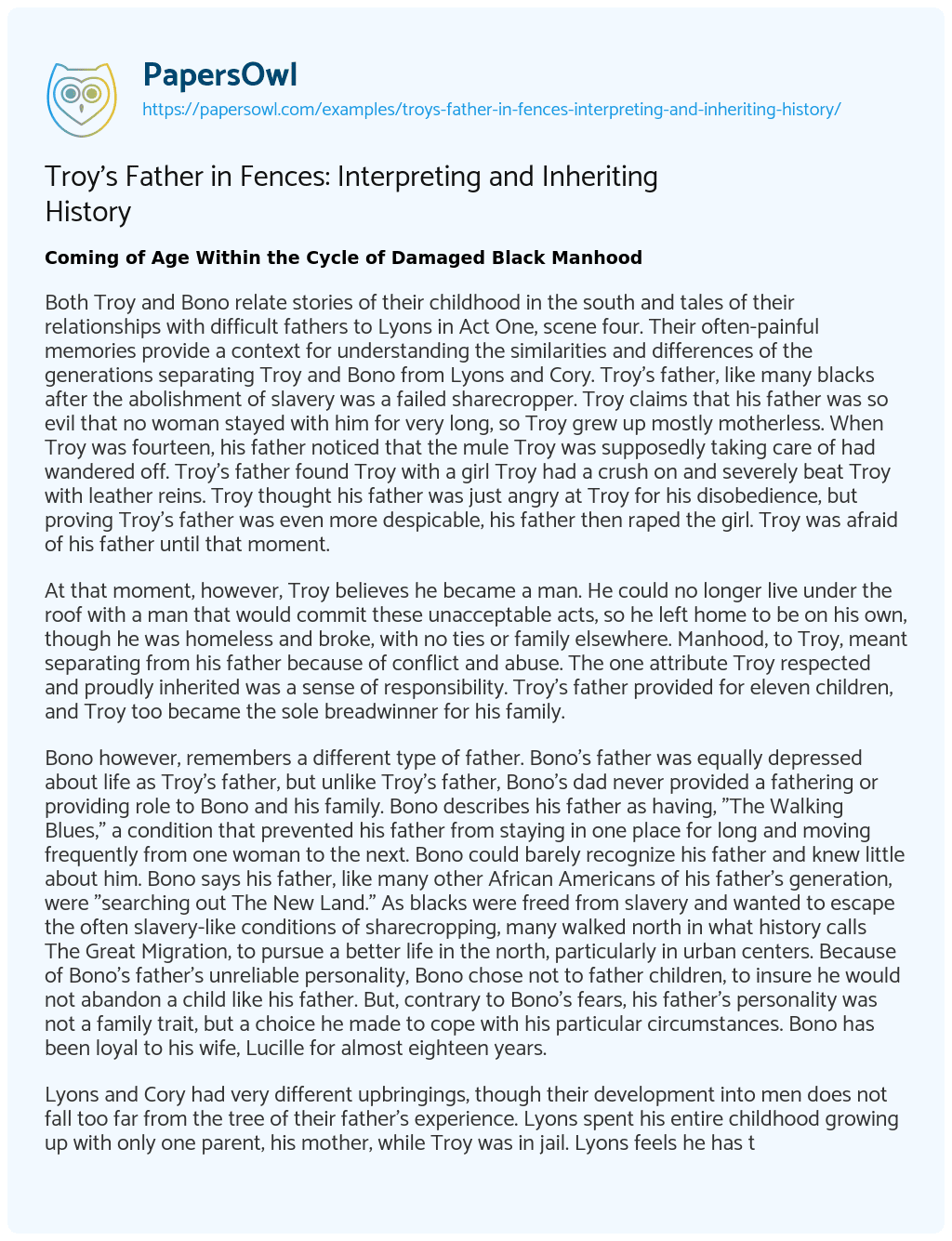 Coming of Age Within the Cycle of Damaged Black Manhood

Both Troy and Bono relate stories of their childhood in the south and tales of their relationships with difficult fathers to Lyons in Act One, scene four. Their often-painful memories provide a context for understanding the similarities and differences of the generations separating Troy and Bono from Lyons and Cory. Troy’s father, like many blacks after the abolishment of slavery was a failed sharecropper. Troy claims that his father was so evil that no woman stayed with him for very long, so Troy grew up mostly motherless. When Troy was fourteen, his father noticed that the mule Troy was supposedly taking care of had wandered off. Troy’s father found Troy with a girl Troy had a crush on and severely beat Troy with leather reins. Troy thought his father was just angry at Troy for his disobedience, but proving Troy’s father was even more despicable, his father then raped the girl. Troy was afraid of his father until that moment.

At that moment, however, Troy believes he became a man. He could no longer live under the roof with a man that would commit these unacceptable acts, so he left home to be on his own, though he was homeless and broke, with no ties or family elsewhere. Manhood, to Troy, meant separating from his father because of conflict and abuse. The one attribute Troy respected and proudly inherited was a sense of responsibility. Troy’s father provided for eleven children, and Troy too became the sole breadwinner for his family.

Bono however, remembers a different type of father. Bono’s father was equally depressed about life as Troy’s father, but unlike Troy’s father, Bono’s dad never provided a fathering or providing role to Bono and his family. Bono describes his father as having, “The Walking Blues,” a condition that prevented his father from staying in one place for long and moving frequently from one woman to the next. Bono could barely recognize his father and knew little about him. Bono says his father, like many other African Americans of his father’s generation, were “searching out The New Land.” As blacks were freed from slavery and wanted to escape the often slavery-like conditions of sharecropping, many walked north in what history calls The Great Migration, to pursue a better life in the north, particularly in urban centers. Because of Bono’s father’s unreliable personality, Bono chose not to father children, to insure he would not abandon a child like his father. But, contrary to Bono’s fears, his father’s personality was not a family trait, but a choice he made to cope with his particular circumstances. Bono has been loyal to his wife, Lucille for almost eighteen years.

Lyons and Cory had very different upbringings, though their development into men does not fall too far from the tree of their father’s experience. Lyons spent his entire childhood growing up with only one parent, his mother, while Troy was in jail. Lyons feels he has the right to make his own life decisions and pursue his own dreams in music because he had more familial support and fewer hardships than Troy. Troy was not around to mold him into a responsible person, so Lyons tends to need to borrow money, though he does pay Troy back respectfully. Cory ends up leaving home in a similar conflict with Troy that Troy had with Cory’s paternal grandfather. To Troy and Cory, becoming a man comes to mean leaving the man that raised you because of a violent conflict. This painful process of coming of age is confusing. For both Troy and Cory, the creation of their own identity when their role model is a creature of duality—part responsible and loyal, the other side, hurtful, selfish and abusive, proves a difficult model with which to mold their own identity as grown men with a more promising future than the father who threatens their livelihood.

Much of the conflict in Wilson’s plays, including Fences, arises because the characters are at odds with the way they see the past and what they want to do with the future. For example, Troy Maxson and his son, Cory see Cory’s future differently because of the way they interpret history. Troy does not want Cory to experience the hardship and disappointment Troy felt trying to become a professional sports player, so he demands that Cory work after school instead of practicing with the football team. Cory, however, sees that times changed since baseball rejected a player as talented as Troy because of the color of his skin. Cory knows the possibility exists that the professional sports world will include, not exclude him. In Act One, Scene Three, Cory provides examples of successful African American athletes to Troy. Cory says, “The Braves got Hank Aaron and Wes Covington. Hank Aaron hit two home runs today. That makes forty-three.” Troy responds, “Hank Aaron ain’t nobody.” Cory’s sport, football, integrated its players years before baseball. For Troy to accept this change in the world would cause Troy to accept the death of his own dreams. Troy refuses to see Cory’s potential because it would mean accepting his own misfortune. Troy and Cory see history in a way that benefits their worldview. Unfortunately this conflict pushes father and son away from each other. Troy, who learned a responsible work ethic from his otherwise abusive father, means well when he insists that Cory return to work at the A&P because he sees the job as fair, honest work that isn’t at the mercy of powerful whites’ sometimes arbitrary decisions, as in Major League baseball. But by attempting to insure Cory of a harmless future, Troy stifles his son’s potential and prevents Cory from having a promising future.

Troy’s perception of what is right and what is wrong for Cory, based on Troy’s refusal to perceive a historical change in the acceptance of blacks, tragically causes Cory to experience a disappointing fate similar to Troy’s. Troy passes his personal history on to his family in other ways throughout the play with sayings that represent his philosophies of life like, “You gotta take the crookeds with the straights.” His children also inherit Troy’s past by learning songs he sings like, “Hear It Ring! Hear It Ring!” a song Troy’s own father taught him. Cory tells Rose in Act Two, scene five, “Papa was like a shadow that followed you everywhere.” Troy’s songs and sayings link his family to the difficult life in the south that his generation was free to run away from, though penniless and without roots in the north. Troy’s purposefully and inadvertently passes on his life experience to his children and family, for better and for worse.