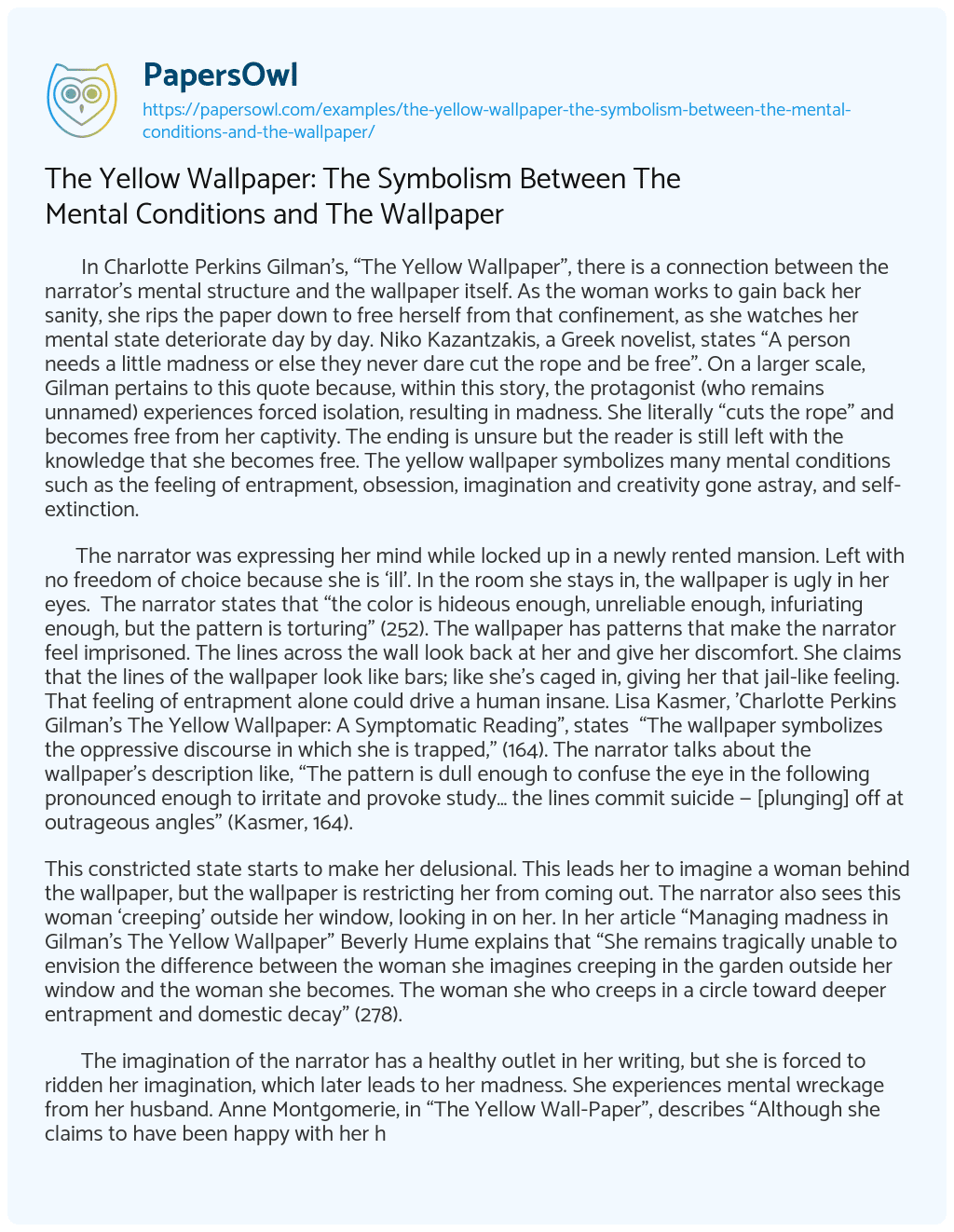 In Charlotte Perkins Gilman’s, “The Yellow Wallpaper”, there is a connection between the narrator’s mental structure and the wallpaper itself. As the woman works to gain back her sanity, she rips the paper down to free herself from that confinement, as she watches her mental state deteriorate day by day. Niko Kazantzakis, a Greek novelist, states “A person needs a little madness or else they never dare cut the rope and be free”. On a larger scale, Gilman pertains to this quote because, within this story, the protagonist (who remains unnamed) experiences forced isolation, resulting in madness. She literally “cuts the rope” and becomes free from her captivity. The ending is unsure but the reader is still left with the knowledge that she becomes free. The yellow wallpaper symbolizes many mental conditions such as the feeling of entrapment, obsession, imagination and creativity gone astray, and self-extinction.

The narrator was expressing her mind while locked up in a newly rented mansion. Left with no freedom of choice because she is ‘ill’. In the room she stays in, the wallpaper is ugly in her eyes.  The narrator states that “the color is hideous enough, unreliable enough, infuriating enough, but the pattern is torturing” (252). The wallpaper has patterns that make the narrator feel imprisoned. The lines across the wall look back at her and give her discomfort. She claims that the lines of the wallpaper look like bars; like she’s caged in, giving her that jail-like feeling. That feeling of entrapment alone could drive a human insane. Lisa Kasmer, ‘Charlotte Perkins Gilman’s The Yellow Wallpaper: A Symptomatic Reading”, states  “The wallpaper symbolizes the oppressive discourse in which she is trapped,” (164). The narrator talks about the wallpaper’s description like, “The pattern is dull enough to confuse the eye in the following pronounced enough to irritate and provoke study… the lines commit suicide — [plunging] off at outrageous angles” (Kasmer, 164).

This constricted state starts to make her delusional. This leads her to imagine a woman behind the wallpaper, but the wallpaper is restricting her from coming out. The narrator also sees this woman ‘creeping’ outside her window, looking in on her. In her article “Managing madness in Gilman’s The Yellow Wallpaper” Beverly Hume explains that “She remains tragically unable to envision the difference between the woman she imagines creeping in the garden outside her window and the woman she becomes. The woman she who creeps in a circle toward deeper entrapment and domestic decay” (278).

The imagination of the narrator has a healthy outlet in her writing, but she is forced to ridden her imagination, which later leads to her madness. She experiences mental wreckage from her husband. Anne Montgomerie, in “The Yellow Wall-Paper”, describes “Although she claims to have been happy with her husband, who was ‘tender’ and ‘devoted’… she felt the natural force of sex-attraction. Thus, she began to experience periods of depression,” Her deteriorating mental state fairly after the birth of her child leaves the assumption that it was postpartum depression. She is trapped by the role assigned to being a wife. Marriage usually means having children, and too many children meant unable to do other work.

Even though she loves her husband, it seems as if he forces a family upon her. Because of the time period, this was common for women. Her husband, John, causes this mental state to begin with, and by also being her doctor, this gives her no room to really speak on how she feels. “You see, he does not believe I am sick” (246). With this, he gives her the ‘rest cure’. Bright Celeste, Professor in Literature, redefines that the rest cure was “used in 1873 to about 1925, this ‘cure’ largely confined women to their beds [and] they were forbidden to work or have social interactions”. The rest cure is used to limit women from having an imaginative sense of power.  Although John believes this cure will help, somewhere in there, he may actually believe the opposite. John is manipulative, controlling and treats her like a child. He makes her sound dramatic and demanding because she asks him to change the wallpaper. Her husband is linked to the madness and conditions that unravel in this story. He takes her imagination away from her.

Another contributing factor to the protagonists’ imagination is how the narrator and Gilman are indistinguishable and then turn into two separate people. The narrator and Gilman are clearly the same people throughout the beginning of the short story. Jefferey Berman, Psychology Professor, states that “as the former becomes terminally insane, the latter remains firmly in control of the narrative” (200).  This allows the symbolic power of the wallpaper rather than the authoritative speaker. The narrator is writing in this journal as the days go by, and time passes. Her words become jumbled up; she seems scatter-brained and unorganized. As Berman points out  “At the end, the narrator and the author are worlds apart” (200). As she grows fond of the wallpaper, the narrator realizes that it is the only part of her life she can still control. This is emblematic that the wallpaper becomes her state of mind. She uses this mindset in replacement with her adult intellectuality. The narrative view clearly does change. This goes to show that she has no control over her sanity at this point. Gilman is just writing about the narrator versus being the narrator. The wallpaper is a depiction of herself. She writes, “I’ve got out at last… in spite of you and Jane. And I’ve pulled off most of the paper, so you can’t put me back!” (257). She sees herself trapped in the wallpaper and wants to get out.

The ending is ambiguous, and some argue that she (the protagonist) kills herself. Reading through the story and picking up puzzle pieces that correlate to the strategic ending, supports the theory. The narrator is ready to become free from the walls. Somewhere within the story, she finds a rope, concluding that she might have hung herself. As said before, she starts writing more disorganizedly and makes no sense towards the end. Almost like there are two separate people. A ghost, maybe? This would help back up why it sounds like someone else narrating.

When the husband finds the door locked and starts shouting for his wife, she does not respond. By this point she is only talking about him. When he gets through the door, he sees her and faints. This could be because he sees his wife hanging there dead from the rope. The narrator states that she “got a rope.. [and] if that woman does get out and tries to get away, I can tie her” (256).

With her mental state so deteriorated away, her imagination isn’t allowing her to see that she is the woman and she’d be tying herself up. The story ends with the last sentence, “right across my path by the wall, so that I had to creep over him every time!” (257).  As the lady who creeps over her. This leaves an unfinished ending with the theory that she was brought into self-extinction from her madness, loss of sensation, and imagination.

All these mental conditions and traits that are seen in this short story, are all linked and symbolic to the wallpaper.  With a connection from the narrator’s mental structure to the wallpaper itself, it is seen that some of her mental conditions consisted of; entrapment, obsessions, creativity gone mad, and ending in a possible self-extinction. The wallpaper is a sufficient symbol to represent the narrator’s mental and physical confinement. The story sure does have a mind of its own as well.

The Yellow Wallpaper: The Symbolism Between The Mental Conditions and The Wallpaper. (2021, Jun 29). Retrieved from https://papersowl.com/examples/the-yellow-wallpaper-the-symbolism-between-the-mental-conditions-and-the-wallpaper/