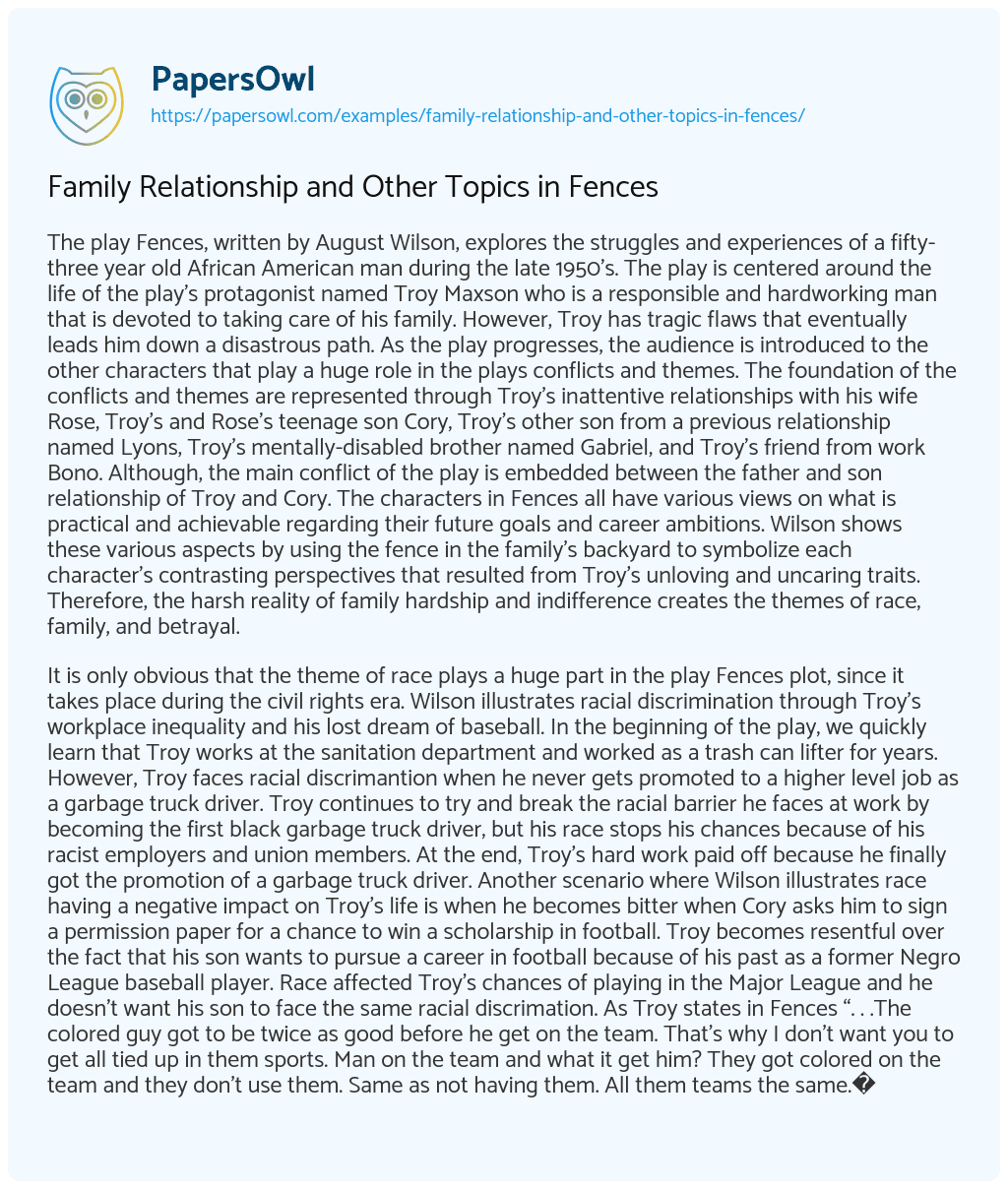 The play Fences, written by August Wilson, explores the struggles and experiences of a fifty-three year old African American man during the late 1950’s. The play is centered around the life of the play’s protagonist named Troy Maxson who is a responsible and hardworking man that is devoted to taking care of his family. However, Troy has tragic flaws that eventually leads him down a disastrous path. As the play progresses, the audience is introduced to the other characters that play a huge role in the plays conflicts and themes. The foundation of the conflicts and themes are represented through Troy’s inattentive relationships with his wife Rose, Troy’s and Rose’s teenage son Cory, Troy’s other son from a previous relationship named Lyons, Troy’s mentally-disabled brother named Gabriel, and Troy’s friend from work Bono. Although, the main conflict of the play is embedded between the father and son relationship of Troy and Cory. The characters in Fences all have various views on what is practical and achievable regarding their future goals and career ambitions. Wilson shows these various aspects by using the fence in the family’s backyard to symbolize each character’s contrasting perspectives that resulted from Troy’s unloving and uncaring traits. Therefore, the harsh reality of family hardship and indifference creates the themes of race, family, and betrayal.

It is only obvious that the theme of race plays a huge part in the play Fences plot, since it takes place during the civil rights era. Wilson illustrates racial discrimination through Troy’s workplace inequality and his lost dream of baseball. In the beginning of the play, we quickly learn that Troy works at the sanitation department and worked as a trash can lifter for years. However, Troy faces racial discrimantion when he never gets promoted to a higher level job as a garbage truck driver. Troy continues to try and break the racial barrier he faces at work by becoming the first black garbage truck driver, but his race stops his chances because of his racist employers and union members. At the end, Troy’s hard work paid off because he finally got the promotion of a garbage truck driver. Another scenario where Wilson illustrates race having a negative impact on Troy’s life is when he becomes bitter when Cory asks him to sign a permission paper for a chance to win a scholarship in football. Troy becomes resentful over the fact that his son wants to pursue a career in football because of his past as a former Negro League baseball player. Race affected Troy’s chances of playing in the Major League and he doesn’t want his son to face the same racial discrimation. As Troy states in Fences “. . .The colored guy got to be twice as good before he get on the team. That’s why I don’t want you to get all tied up in them sports. Man on the team and what it get him? They got colored on the team and they don’t use them. Same as not having them. All them teams the same.” (Wilson 1050). Wilson uses race as a theme to demonstrate the grueling impact the characters faced everyday of their lives and to show the opportunities withheld from the characters because they were African American.

The theme of betrayal runs deep in the roots of the Maxson family. Troy betrays just about everyone he is close to which includes Rose, Cory, Lyons, Gabriel, Bono, and even his daughter Raynell. Rose faces betrayal from Troy when he developed feelings for Alberta and got her pregnant. This has to be the ultimate betrayal because in Rose’s eyes she gave her marriage with Troy her all “I done tried to be everything a wife should be. Everything a wife could be. Been married eighteen years and I got to live to see the day you tell me you have been seeing another woman and done fathered a child by her. . . “ (Wilson 1069). Another way Troy betrays his loved ones is when he holds back Cory from pursuing his dream of baseball. Cory believes that his father’s betrayal stems from his fear that he might become something better than what he was or that he might be accepted as an African American baseball player. Troy’s betrayal eliminated Cory’s only chance of going to college because of their financial situation and it jeopardizes Corys future. In result, Cory feels as if his father never loved him and decides to pack his things and leave. Wilson uses the father and son conflict to imply how betrayal can break a family apart and how it affects a person’s inability to trust in life, which threatens future relationships.

Last but not least, the play Fences is centered around the family dynamics of the Maxson family. Troy’s actions resemble a self-centered and stubborn man, however he still has likeable qualities of a father and husband. For insistence, Troy is responsible for providing for his family because he insists it is his duty, “It’s my responsibility! You understand that? A man got to take care of his family. You live in my house…sleep you behind on my bedclothes…fill you belly up with my food…cause you my son. You my flesh and blood. Not cause I like you! Cause it’s my duty to take care of you” (Wilson 1053). Deep down Troy loved his family but the tragic part is that he was too headstrong to actually show it. Wilson also depicts family through Troy’s wife Rose who is a nurturing and loving mother and wife, despite Troy having a daughter with a woman he had an affair with named Alberta. Rose’s traits of perseverance and strength show when she takes in Troy’s daughter Raynell, from the previous affair with Alberta, and raises her as her own daughter. Rose’s role as a mother is presented through Wilsons symbolism of the fence, which for Rose displays her protection to keep her loved ones safe from the outside world. Wilson represents the theme of family through these scenes to show how the characters made growth and progress within themselves to forgive Troy. At the end, the character’s growth is shown when Cory decides to attend his father’s funeral, regardless of how Troy treated Cory. Wilson expresses family as an ever-lasting bond that will never always piece itself back together despite the trials they may face.

Wilson displays how Troy’s failures relate to the theme of race, family, and betrayal. The biggest obstacle in Fences is Troy’s relationships with his wife Rose and son Cory. Wilson uses the fence in the backyard to symbolize the strength and dedication of the Maxson family and how each character dealt with Troy’s tragic flaws. However, we learn that Troy’s unloving and uncaring traits stemmed from the discrimination he faced in the past. The use of irony is represented at the end of the play when the fence is completed after the family reunites for the first time after Troy’s death. The completion of the fence symbolizes the family coming together as a whole, despite the challenges they faced. Wilson uses the themes in Fences to give an inside look on how being an African American, during the 1950s, created everyday life struggles and experiences.

Family Relationship and Other Topics in Fences. (2021, Apr 25). Retrieved from https://papersowl.com/examples/family-relationship-and-other-topics-in-fences/