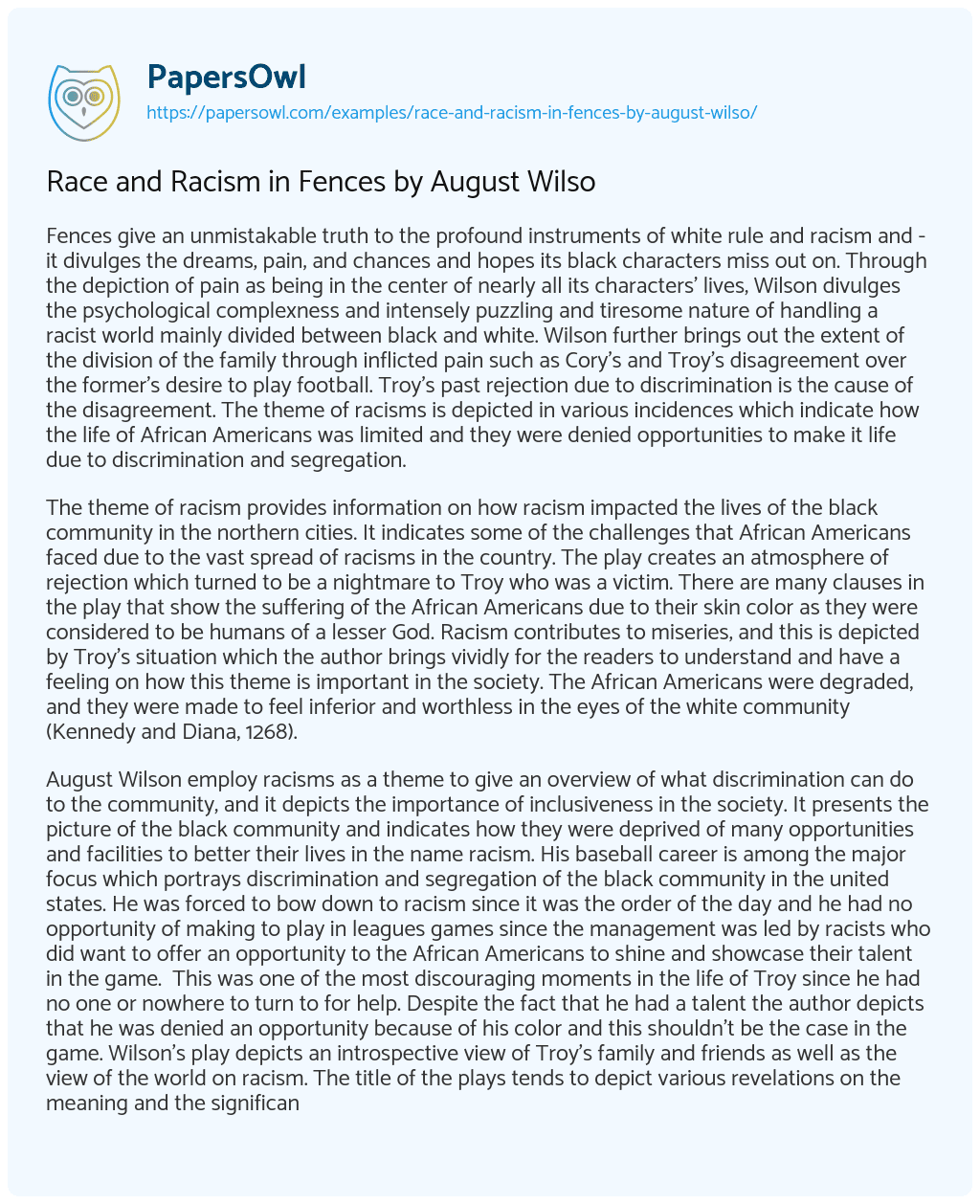 Fences give an unmistakable truth to the profound instruments of white rule and racism and -it divulges the dreams, pain, and chances and hopes its black characters miss out on. Through the depiction of pain as being in the center of nearly all its characters’ lives, Wilson divulges the psychological complexness and intensely puzzling and tiresome nature of handling a racist world mainly divided between black and white. Wilson further brings out the extent of the division of the family through inflicted pain such as Cory’s and Troy’s disagreement over the former’s desire to play football. Troy’s past rejection due to discrimination is the cause of the disagreement. The theme of racisms is depicted in various incidences which indicate how the life of African Americans was limited and they were denied opportunities to make it life due to discrimination and segregation.

The theme of racism provides information on how racism impacted the lives of the black community in the northern cities. It indicates some of the challenges that African Americans faced due to the vast spread of racisms in the country. The play creates an atmosphere of rejection which turned to be a nightmare to Troy who was a victim. There are many clauses in the play that show the suffering of the African Americans due to their skin color as they were considered to be humans of a lesser God. Racism contributes to miseries, and this is depicted by Troy’s situation which the author brings vividly for the readers to understand and have a feeling on how this theme is important in the society. The African Americans were degraded, and they were made to feel inferior and worthless in the eyes of the white community (Kennedy and Diana, 1268).

August Wilson employ racisms as a theme to give an overview of what discrimination can do to the community, and it depicts the importance of inclusiveness in the society. It presents the picture of the black community and indicates how they were deprived of many opportunities and facilities to better their lives in the name racism. His baseball career is among the major focus which portrays discrimination and segregation of the black community in the united states. He was forced to bow down to racism since it was the order of the day and he had no opportunity of making to play in leagues games since the management was led by racists who did want to offer an opportunity to the African Americans to shine and showcase their talent in the game.  This was one of the most discouraging moments in the life of Troy since he had no one or nowhere to turn to for help. Despite the fact that he had a talent the author depicts that he was denied an opportunity because of his color and this shouldn’t be the case in the game. Wilson’s play depicts an introspective view of Troy’s family and friends as well as the view of the world on racism. The title of the plays tends to depict various revelations on the meaning and the significance of building of the fence in the yard of Troy Maxons represents.

The fence offers protection from the world of racism, and this is indicated on the way in which Maxson responded to the challenges that he faced as he was growing up. Troy knew that he has a future in baseball and he was determined to make it happen, and that is the reason why he did not allow that racism world to hinder or hold him back from performing. He was focused in doing what he loved, and that is the reason why he came up with a plan on how to protect himself and his family from negativity and racisms that was growing at a significant rate (Kennedy and Diana, 1276). Troy sees a fence in his real life as confinement from his dream. Racism was used as an obstacle to hinder him from doing what he loved and therefore taking ways his hopes of shining in games. Segregation was real, and this was used to hold back the African Americans from making it in life more so by judging them by color and not abilities. The author builds up the theme to show how racism has affected the lives of the black people negatively while stating why it is important to ensure that this is eliminated for justice and equality to be restored in the society (Nadel 18). The play is all about Troy’s interactions with other characters, and this indicates how the life of Troy was impacted significantly by racism which was it its peak.

For that reason, Wilson’s play, in part, outlays itself as a depiction of how racism structures and defines the daily lives of its characters, with the goal of exposing-using the specific experiences of a particular family-racism’s numerous impacts on the 1950s’ black American community at large. The meaning and need of the fence including Wilson’s revelation of the oppressed African American community are a show of disapproval for white power inflicted pain. Troy feels Cory should not focus on in football since he concludes that African Americans people are not allowed to be successful in the world of sports that is dominated by the white. Troy’s history depicted his past experiences as a talented baseball player whose career was deterred by discrimination have all made him aware of black life and opportunity in the surrounding world. During his era, baseball was integrated, but discrimination was still prevalent (Menson-Furr, 9).

The fence, erected by Troy in front of his house, is used to depict separation, as well as a general psychological urge for fortification whereby a “black” interior may be offset from the domination of the “white” world surrounding it. From one perspective, the fence depicts the general effects of segregation on a geographical scale: ethnic isolation and black restriction. Troy erects the fence on his own; it is chiefly his handiwork, though Rose initially assigns him the task of building it. She desires to separate her family and herself from the rest of the world and to safeguard their interior from the alienating effects on society by the whites. While Rose’s reason for putting up the fence is to limit and control the influence of blacks, Troy’s reason is to affirm and defend their world.

During the entire play, it is observed how characters are conscripted to a definition of their world which is limited by a racist system of white economic and social power. Racial hierarchy sub-division is also observed in Troy’s workplace. Also, most of the characters’ conversations rely on colored people self-identification thus describing their roles in the context of the white rule. Troy who works as a garbage man, is not pleased with the racism at his place of work as he says: ‘I went to Mr. Rand and asked him, ‘Why? Why you got white men’s driving and the colored lifting?” (Kennedy and Diana, 1263). He is ticked off by the fact that white men are favored and given the driving jobs while their black counterparts’ jobs are to lift and dump the trash cans. The issue of racism is brought out in the segregation of duties at Troy’s job where blacks were tasked with the manual labor jobs.

The play vividly tackles the issue of race and racism. The author uses various instances in the characters’ lives to bring out the theme. From the play, it is visibly clear how racial discrimination impacted the characters and put a strain on their families’ well-being. The setting of the book is in the 1950s, and the majority characters are African Americans who deal with issues of racism in their day to day life (Kennedy and Diana, 1256). During this period, little progress had been made about relations between different race and the shadow of slavery still exists in the country. The author explores the experience of the Maxson family during this segregation era also revealing to the readers the connections between the African American’s inner world and the vast surrounding power of the white community.

This act discouraged him, and he hated whom he was since it had limited his ambitions significantly. In the local leagues and during training Troy had proved to be a good player and he was talented in the game. He was talented and as good as most of the white players he even did better in the game than the majority of them but he was never given an opportunity he deserved to shine in major leagues (Kennedy and Diana, 1245). Discrimination by race played a role in killing his dreams. This forms one of the major themes in the plays whereby Wilson utilized the example to depict the bias that is going on in the united states. Racism is depicted Wilson’s play and plays a significant role as a theme as witnessed by Troy Maxson’s character makeup.  It plays a major role since, without racism, Troy Maxson’s entire character role would be illogical and therefore, this brings about a major theme that covers a significant part of the play.

Race and racism are depicted in August’s play, Fences. Here is a line in the play that seems to encapsulate a broader theme of racism in the play, Troy: ‘I’m talking about if you could play ball then they ought to have let you play. Don’t care what color you were.’ (1.1.81) This depicts that race is one of the main themes in the play. Racism has been a matter of concern in the world more so in the western countries whereby the people of color who are the African Americans are discriminated against due to their color. Discrimination denies the African Americans an opportunity to live their dreams or do what the love and this is also depicted in the play. In this case, Troy indicates how racism hindered and shuttered his dreams of becoming a professional baseball player. He was a good player, and he played better than most of the white plays, but due to his race, he was not given an opportunity to play in major leagues.

Race and Racism in Fences by August Wilso. (2022, Apr 13). Retrieved from https://papersowl.com/examples/race-and-racism-in-fences-by-august-wilso/

Race and Racism are Deeply Rooted

Race and Racism in Invisible Man