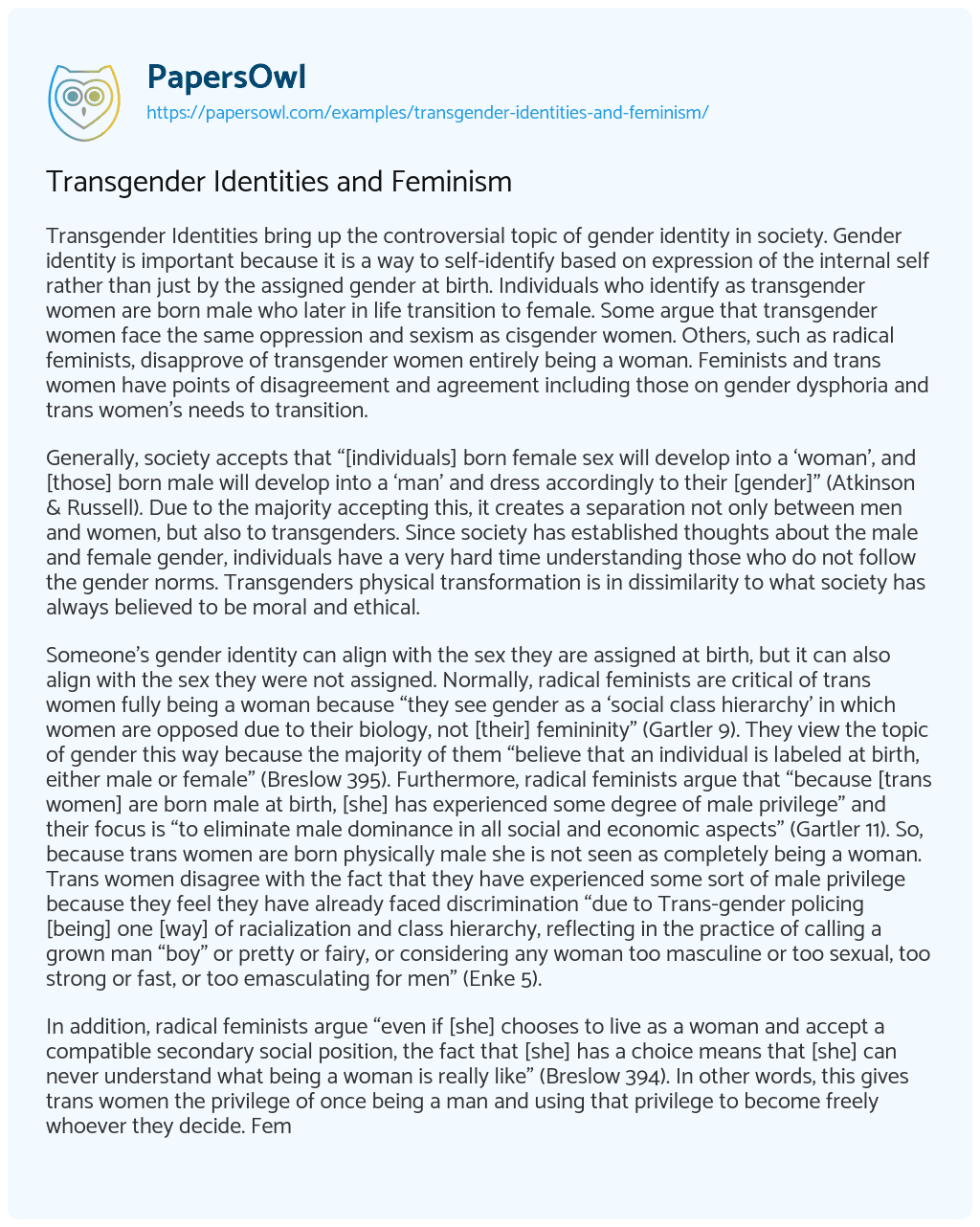 Transgender Identities bring up the controversial topic of gender identity in society. Gender identity is important because it is a way to self-identify based on expression of the internal self rather than just by the assigned gender at birth. Individuals who identify as transgender women are born male who later in life transition to female. Some argue that transgender women face the same oppression and sexism as cisgender women. Others, such as radical feminists, disapprove of transgender women entirely being a woman. Feminists and trans women have points of disagreement and agreement including those on gender dysphoria and trans women’s needs to transition.

Generally, society accepts that “[individuals] born female sex will develop into a ‘woman’, and [those] born male will develop into a ‘man’ and dress accordingly to their [gender]” (Atkinson & Russell). Due to the majority accepting this, it creates a separation not only between men and women, but also to transgenders. Since society has established thoughts about the male and female gender, individuals have a very hard time understanding those who do not follow the gender norms. Transgenders physical transformation is in dissimilarity to what society has always believed to be moral and ethical.

Someone’s gender identity can align with the sex they are assigned at birth, but it can also align with the sex they were not assigned. Normally, radical feminists are critical of trans women fully being a woman because “they see gender as a ‘social class hierarchy’ in which women are opposed due to their biology, not [their] femininity” (Gartler 9). They view the topic of gender this way because the majority of them “believe that an individual is labeled at birth, either male or female” (Breslow 395). Furthermore, radical feminists argue that “because [trans women] are born male at birth, [she] has experienced some degree of male privilege” and their focus is “to eliminate male dominance in all social and economic aspects” (Gartler 11). So, because trans women are born physically male she is not seen as completely being a woman. Trans women disagree with the fact that they have experienced some sort of male privilege because they feel they have already faced discrimination “due to Trans-gender policing [being] one [way] of racialization and class hierarchy, reflecting in the practice of calling a grown man “boy” or pretty or fairy, or considering any woman too masculine or too sexual, too strong or fast, or too emasculating for men” (Enke 5).

In addition, radical feminists argue “even if [she] chooses to live as a woman and accept a compatible secondary social position, the fact that [she] has a choice means that [she] can never understand what being a woman is really like” (Breslow 394). In other words, this gives trans women the privilege of once being a man and using that privilege to become freely whoever they decide. Feminists feel that the “biological description of trans women confuse women boundaries and could contradict or disrupt feminist purposes of establishing a voice for women” (Breslow 394). For radical feminists, these ideas are enough to encourage other feminists that “women-only areas and service industries should be kept for cisgender women only” (Gartler 26). Feminists do not realize that they are enhancing the discrimination of trans women by excluding their option to fully express being a woman.

In reality feminists are opposing their own beliefs and statements. For example, feminists believe in “social, political, and economic equality of the sexes in order to empower women worldwide” (Breslow 392). Although, radical feminists are excluding trans women from identifying as a woman because of their biological factors. They aren’t considering their own ideas about feminism, instead they are rejecting individuals and doing exactly what society does daily, discriminating internal gender. In addition, research shows “individuals who identify as transgender are vulnerable and have higher rates of discrimination… compared [to] the general population” (Atkinson & Russell). This suggests that trans women face more discrimination than cisgender women. The reason for this may be because “a transgender person [undergoing] a physical transformation, challenges the expectations that [society] has [set] for each gender role” (Breslow 396).

On the other hand, some feminists are trans-inclusive or trans-positive and support trans women’s rights to self-identification. Trans feminists struggle to be accepted by radical feminists because “their representation threatens the goals of cisgender women” (Enke 6). “Trans-positive feminists who work with [individuals] who identify as women may serve to address the impact of misogyny, reduce shame, [and] promote a sense of empowerment” (Gartler 1). Trans feminists argue that there are “multiple forms of oppression and sexism, and that trans women and cisgender women have shared interests in fighting sexism” (Gartler 35). Trans-inclusive feminists state that “by assigning people [as] male or female, society has [already] created a difference between them” (Breslow 395). These feminists agree that “along with queer, feminist, disability, and critical-race theories, trans studies acknowledges that all bodies are made of one kind of body, no more or less scientifically produced than the other” (Enke 6). Trans-positive feminists will typically allow the idea that there are a lot of different ways to be a woman. They believe “”every transgender has the right to exist on his or her own terms. [Meaning] that every transgender is enabled to a sex-change operation and self-identification” (Enke 56).

Trans women believe they have a right to express freely as they wish. They consider anyone has the right to self-identification. An individual’s gender identity is an “important [feature] of what it means to be a man or a woman” (Breslow 394). Tans women believe that there is “no given gender identity” for others to decide for you. Instead, “the ethical answer to this social situation is the one we find ourselves in” (Breslow 395). That situation is the one in which “trans women’s relationship to the structure we call ‘patriarchy’ has more in common with the relation to where cis women stand to that structure than with cis men’s relationship to it” (Gartler 11). In other words, trans women have more in common with another woman rather than their assigned gender at birth.

Some trans women believe it is a need to physically transition into a woman. She does not only do this by surgery, but also by hormones. Some trans women take hormones in order to transition to a woman. “The hormones trans women take have been demonstrated to reduce ‘suffering’ without significant opposing psychological or physical effects” (Atkinson & Russell). These hormones can benefit a trans women if she decides she does want sex-reassignment surgery later on in her life. A trans women not being able to express who she truly is can have an affect on her emotionally. The feeling of needing to transition in some way is important to transgenders because it gives them a sense of being able to express who they are internally.

In addition to hormones, there are also non-medical options trans women do to change their physical appearance. Such as, tucking, where she tucks her penis by not making it visible, changing her name, or changing her physical appearance to become more woman-like. One trans woman may choose to dress in clothes associated with the gender with which they identify, while another may want hormone treatment or surgery as part of a transition to living full-time as a woman.

From a feminist perspective, they don’t feel as though trans women need to undergo a physical change in order to become a woman. Radical feminists believe that a trans women will never fully be a woman and will physically stay as a male no matter the surgeries. On the other hand, trans-positive feminists believe trans women “have a right to become a woman” including by surgery or other methods (Enke 110). A trans woman’s perspective compared to that of a feminist is different when it comes to talking about the needs of transitioning. Some might feel uncomfortable with trans women surgically changing their own body in order to become more feminine. Others might feel the need to speak out and support those surgeries. The radical feminists make it hard for trans women to be accepted while other feminists see no difference between a woman and a trans woman. Therefore, feminists and trans women have their own disagreements and agreements on the topic of gender identity.

Gender identity has been a controversial topic throughout the years. There have been disagreements and agreements between feminists and transgender woman on this topic. Should trans women be able to identify as women in all contexts? Radical feminists seem to disagree with this because an individual born a male should be considered a male and a female born with female parts should be considered female. These feminists believe a trans women cannot fully be a woman. On the other hand, trans-positive or trans-inclusive feminist agree with the idea that trans women have the same rights as cisgender women. They believe trans women should be able to change and express freely as they wish, with no exclusion. Transgender women seem to be in agreement with the trans-positive feminists. Furthermore, trans women face equal to more discrimination as cisgender women. The topic of gender dysphoria and trans women’s needs to transition also differ between trans women and feminists. In conclusion, feminists and trans women will continue to have disagreement on what it means to be a woman and who has a right to be one.

Transgender Identities and Feminism. (2021, May 10). Retrieved from https://papersowl.com/examples/transgender-identities-and-feminism/