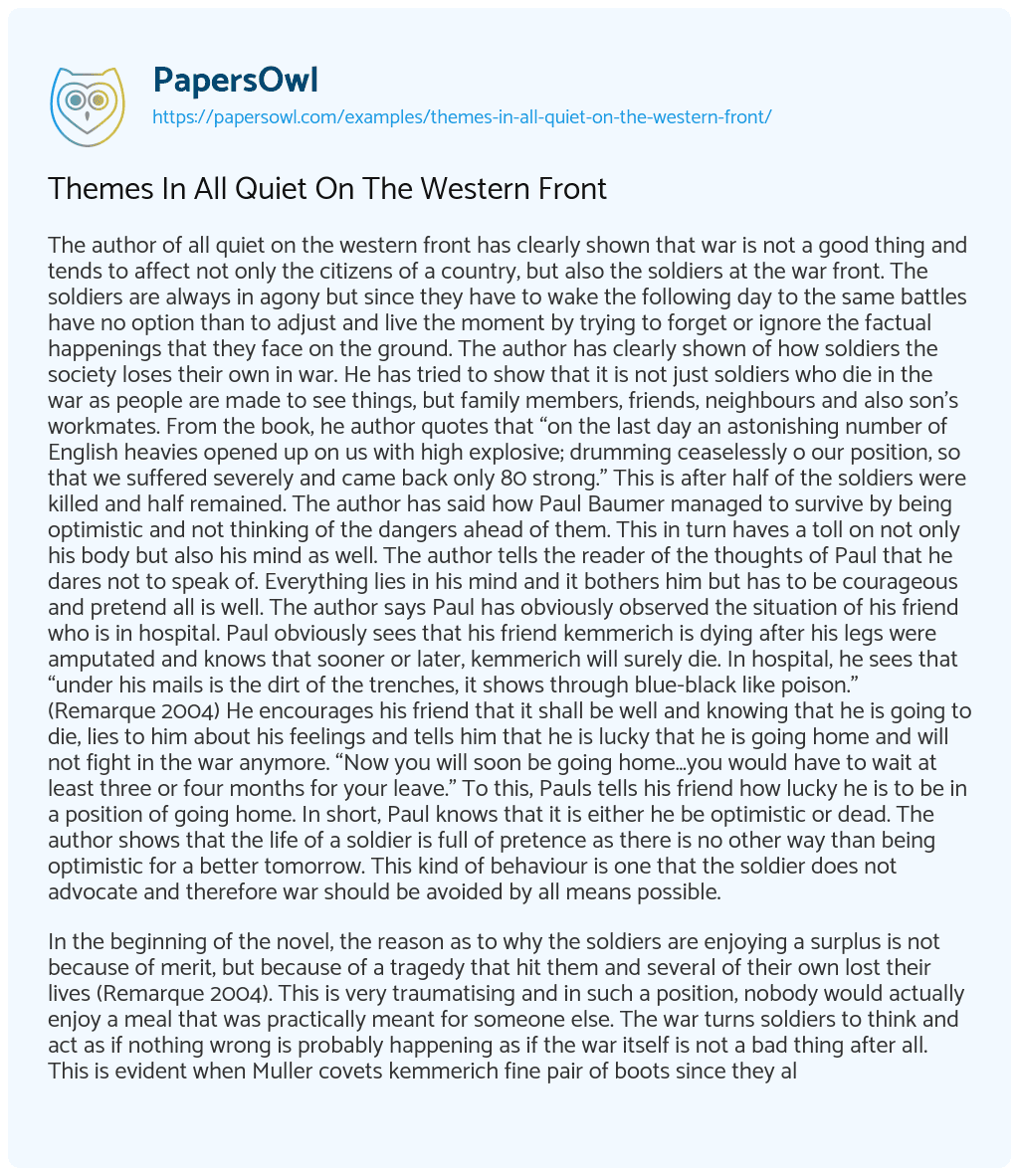 The author of all quiet on the western front has clearly shown that war is not a good thing and tends to affect not only the citizens of a country, but also the soldiers at the war front. The soldiers are always in agony but since they have to wake the following day to the same battles have no option than to adjust and live the moment by trying to forget or ignore the factual happenings that they face on the ground. The author has clearly shown of how soldiers the society loses their own in war. He has tried to show that it is not just soldiers who die in the war as people are made to see things, but family members, friends, neighbours and also son’s workmates. From the book, he author quotes that “on the last day an astonishing number of English heavies opened up on us with high explosive; drumming ceaselessly o our position, so that we suffered severely and came back only 80 strong.” This is after half of the soldiers were killed and half remained. The author has said how Paul Baumer managed to survive by being optimistic and not thinking of the dangers ahead of them. This in turn haves a toll on not only his body but also his mind as well. The author tells the reader of the thoughts of Paul that he dares not to speak of. Everything lies in his mind and it bothers him but has to be courageous and pretend all is well. The author says Paul has obviously observed the situation of his friend who is in hospital. Paul obviously sees that his friend kemmerich is dying after his legs were amputated and knows that sooner or later, kemmerich will surely die. In hospital, he sees that “under his mails is the dirt of the trenches, it shows through blue-black like poison.” (Remarque 2004) He encourages his friend that it shall be well and knowing that he is going to die, lies to him about his feelings and tells him that he is lucky that he is going home and will not fight in the war anymore. “Now you will soon be going home…you would have to wait at least three or four months for your leave.” To this, Pauls tells his friend how lucky he is to be in a position of going home. In short, Paul knows that it is either he be optimistic or dead. The author shows that the life of a soldier is full of pretence as there is no other way than being optimistic for a better tomorrow. This kind of behaviour is one that the soldier does not advocate and therefore war should be avoided by all means possible.

In the beginning of the novel, the reason as to why the soldiers are enjoying a surplus is not because of merit, but because of a tragedy that hit them and several of their own lost their lives (Remarque 2004). This is very traumatising and in such a position, nobody would actually enjoy a meal that was practically meant for someone else. The war turns soldiers to think and act as if nothing wrong is probably happening as if the war itself is not a bad thing after all. This is evident when Muller covets kemmerich fine pair of boots since they all know that kemmerich is as good as dead. Through their discussion, it is clear that Paul is bitter about their school teacher, kanntorek who persuaded them in to enlisting for the war citing it a patriotic duty of every one to protect and fight for their country. Bitterness is also expressed towards the people of the older generation who led the soldiers to the war. This clearly shows resentment, regret and anger to anyone who could have led the soldiers into the war and this shows that foes could be picked along the way, mostly unknowingly because from the instance of the soldiers, their schoolteacher and the older people who influenced them to becoming soldiers cannot be classified among their friends.

Seniors in the society like teachers and other elders are usually viewed as a source of wisdom and intelligence in the society. That is why majority of the soldiers share an experience in them becoming soldiers as either influence from the teacher or the older generation. But it is clear that these people only do the talking while the real thing is left to the soldiers. These people think that legends are at war while the cowards do other activities. But in real sense, these people do know nothing about the war and what it entails. From the experience Paul and his comrades have undergone, the reader can evaluate that the soldiers know the actual meaning of patriotism, sacrifice and the sense of duty than the older generation.

When Remarque says “even though they may have escaped shells, were destroyed by the war,” (Remarque 2004)meant that they may have escaped from the bullets and death in the battlefront but the experiences of the war is evidently killing the soldiers. Many soldiers suffered from shell shock, a psychological condition that may make soldiers insane or may cause death or harm to themselves or to others. These soldiers live in denial and this is evident from soldiers like Muller who tries to evade reality by engrossing himself in books and dreaming of exams. It is clear that the soldiers are not happy and they do not live their lives as expected. When reading a letter from Cantores, Kropp is angry because they have been called “iron youth” (Remarque 2004). In conclusion Remarque has all the reasons why war is not heroic but a torturing activity that should be avoided by all means. The living conditions and the sights may not leave one’s mind in a long time and usually makes one detach from family and the society at large.

Themes In All Quiet On The Western Front. (2021, Mar 19). Retrieved from https://papersowl.com/examples/themes-in-all-quiet-on-the-western-front/

All Quiet on the Western Front Assignment