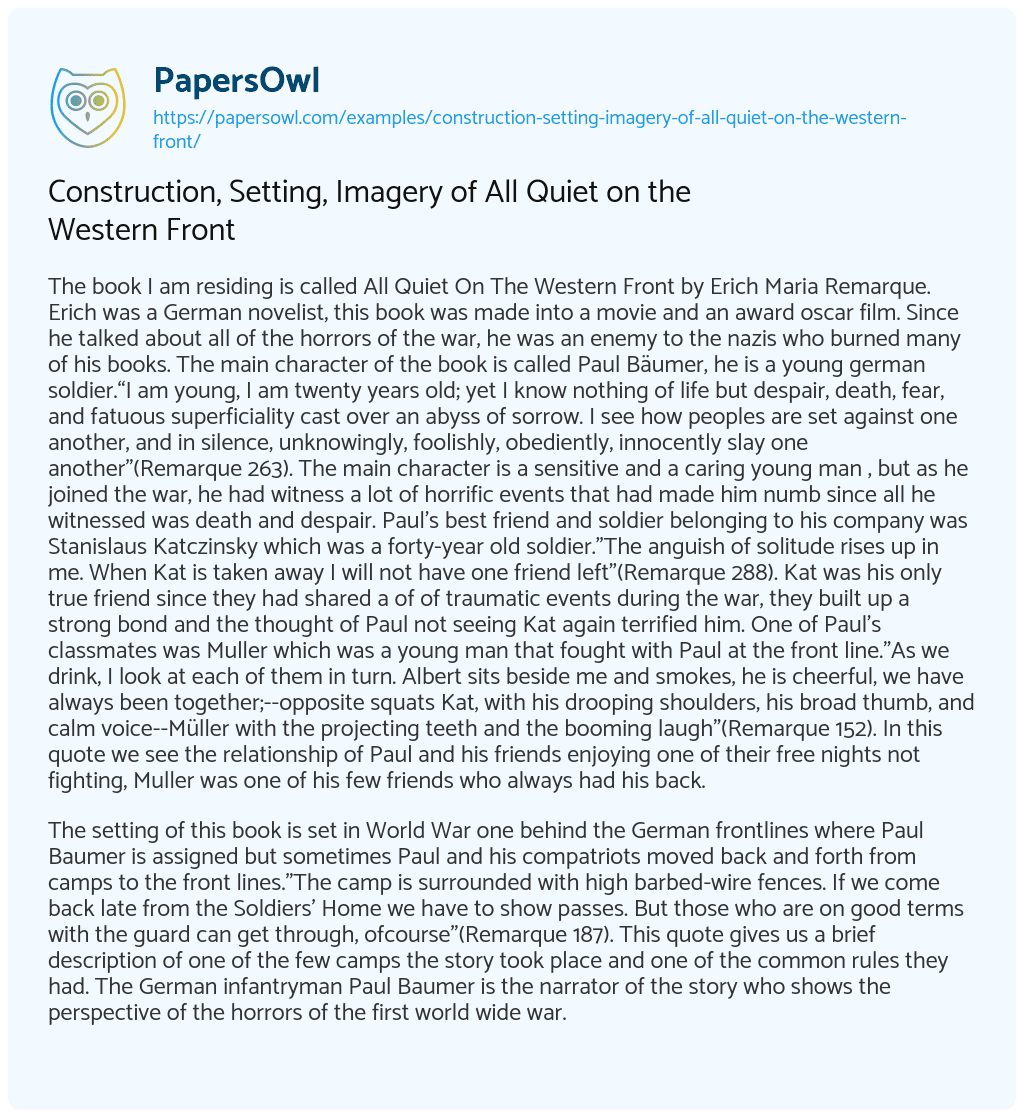 The book I am residing is called All Quiet On The Western Front by Erich Maria Remarque. Erich was a German novelist, this book was made into a movie and an award oscar film. Since he talked about all of the horrors of the war, he was an enemy to the nazis who burned many of his books. The main character of the book is called Paul Bäumer, he is a young german soldier.“I am young, I am twenty years old; yet I know nothing of life but despair, death, fear, and fatuous superficiality cast over an abyss of sorrow. I see how peoples are set against one another, and in silence, unknowingly, foolishly, obediently, innocently slay one another”(Remarque 263). The main character is a sensitive and a caring young man , but as he joined the war, he had witness a lot of horrific events that had made him numb since all he witnessed was death and despair. Paul’s best friend and soldier belonging to his company was Stanislaus Katczinsky which was a forty-year old soldier.”The anguish of solitude rises up in me. When Kat is taken away I will not have one friend left”(Remarque 288). Kat was his only true friend since they had shared a of of traumatic events during the war, they built up a strong bond and the thought of Paul not seeing Kat again terrified him. One of Paul’s classmates was Muller which was a young man that fought with Paul at the front line.”As we drink, I look at each of them in turn. Albert sits beside me and smokes, he is cheerful, we have always been together;–opposite squats Kat, with his drooping shoulders, his broad thumb, and calm voice–Müller with the projecting teeth and the booming laugh”(Remarque 152). In this quote we see the relationship of Paul and his friends enjoying one of their free nights not fighting, Muller was one of his few friends who always had his back.

The setting of this book is set in World War one behind the German frontlines where Paul Baumer is assigned but sometimes Paul and his compatriots moved back and forth from camps to the front lines.”The camp is surrounded with high barbed-wire fences. If we come back late from the Soldiers’ Home we have to show passes. But those who are on good terms with the guard can get through, ofcourse”(Remarque 187). This quote gives us a brief description of one of the few camps the story took place and one of the common rules they had. The German infantryman Paul Baumer is the narrator of the story who shows the perspective of the horrors of the first world wide war.

Construction, Setting, Imagery of All Quiet on the Western Front. (2021, Mar 18). Retrieved from https://papersowl.com/examples/construction-setting-imagery-of-all-quiet-on-the-western-front/

“All Quiet on the Western Front” Novel Analysis

Erich Remarque’s Novel “All Quiet on the Western Front”