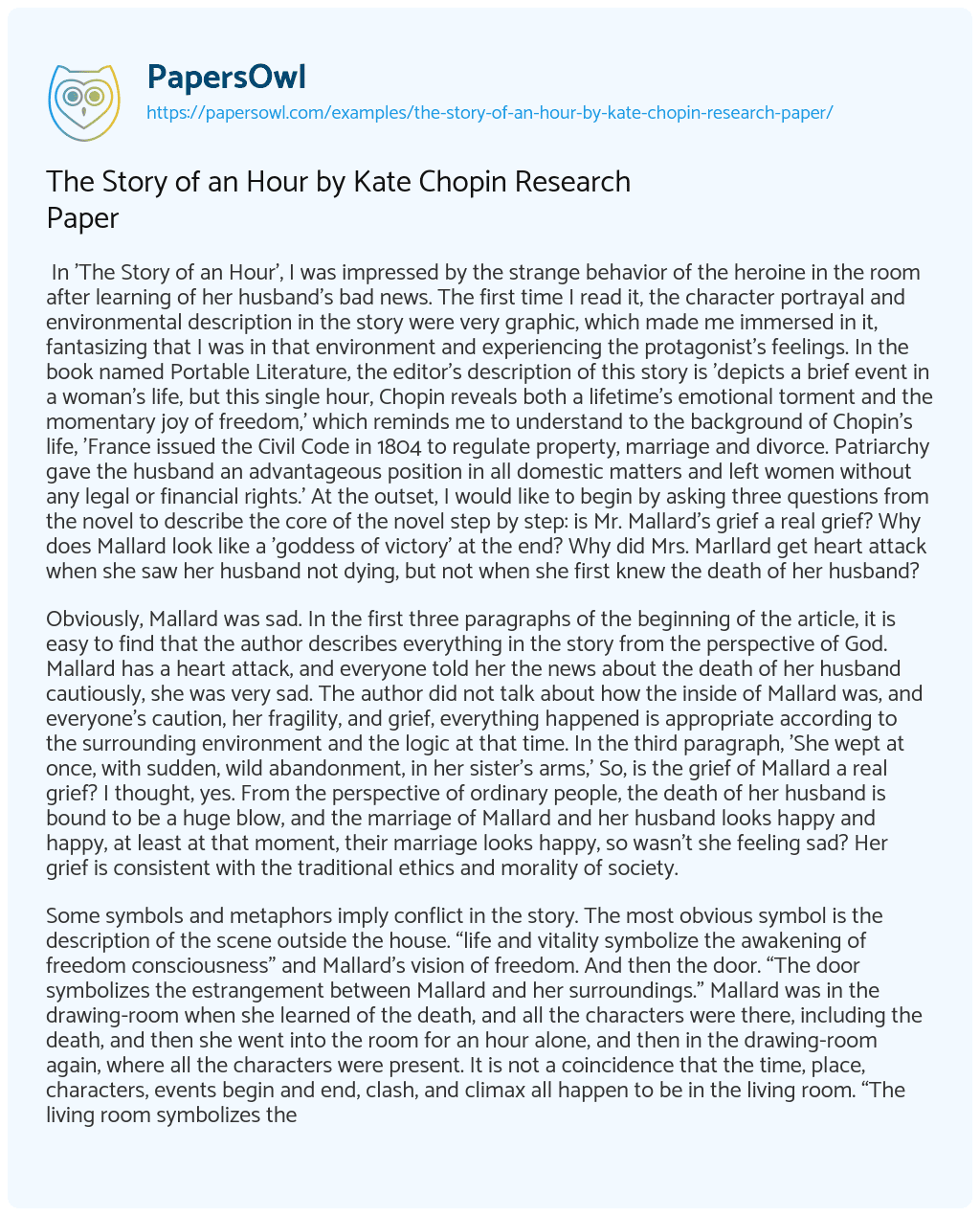 In ‘The Story of an Hour’, I was impressed by the strange behavior of the heroine in the room after learning of her husband’s bad news. The first time I read it, the character portrayal and environmental description in the story were very graphic, which made me immersed in it, fantasizing that I was in that environment and experiencing the protagonist’s feelings. In the book named Portable Literature, the editor’s description of this story is ‘depicts a brief event in a woman’s life, but this single hour, Chopin reveals both a lifetime’s emotional torment and the momentary joy of freedom,’ which reminds me to understand to the background of Chopin’s life, ‘France issued the Civil Code in 1804 to regulate property, marriage and divorce. Patriarchy gave the husband an advantageous position in all domestic matters and left women without any legal or financial rights.’ At the outset, I would like to begin by asking three questions from the novel to describe the core of the novel step by step: is Mr. Mallard’s grief a real grief? Why does Mallard look like a ‘goddess of victory’ at the end? Why did Mrs. Marllard get heart attack when she saw her husband not dying, but not when she first knew the death of her husband?

Obviously, Mallard was sad. In the first three paragraphs of the beginning of the article, it is easy to find that the author describes everything in the story from the perspective of God. Mallard has a heart attack, and everyone told her the news about the death of her husband cautiously, she was very sad. The author did not talk about how the inside of Mallard was, and everyone’s caution, her fragility, and grief, everything happened is appropriate according to the surrounding environment and the logic at that time. In the third paragraph, ‘She wept at once, with sudden, wild abandonment, in her sister’s arms,’ So, is the grief of Mallard a real grief? I thought, yes. From the perspective of ordinary people, the death of her husband is bound to be a huge blow, and the marriage of Mallard and her husband looks happy and happy, at least at that moment, their marriage looks happy, so wasn’t she feeling sad? Her grief is consistent with the traditional ethics and morality of society.

Some symbols and metaphors imply conflict in the story. The most obvious symbol is the description of the scene outside the house. “life and vitality symbolize the awakening of freedom consciousness” and Mallard’s vision of freedom. And then the door. “The door symbolizes the estrangement between Mallard and her surroundings.” Mallard was in the drawing-room when she learned of the death, and all the characters were there, including the death, and then she went into the room for an hour alone, and then in the drawing-room again, where all the characters were present. It is not a coincidence that the time, place, characters, events begin and end, clash, and climax all happen to be in the living room. “The living room symbolizes the world in which she lives, and the room symbolizes the world in which she longs.” So she mourned the death of her husband in the living room, returned to the room, and felt the power of freedom. She returned to the living room as the goddess of victory and was crushed by reality and society. From this point of view, the door symbolizes the passage between the two worlds, but also the barrier between the two worlds, and indeed it means estrangement. The ‘hour’ in the title is a metaphor for the change of Mallard in the room. ‘An hour,’ which is the length of the story. The emphasis on time I think reveals the rapidity of change, the sudden change. There are two mutations in the text, one is the transformation of Mrs. Mallard into the ‘goddess of victory’, the other is the reversal of things, disillusionment quickly. If her husband’s friends had confirmed the truth of the news, or delayed, perhaps the tragedy would not have happened. The news came too soon, he too soon, Mrs. Mallard too soon, her husband back home too soon. It took Mrs. Mallard’s life for a split second

The “Goddess of Victory” symbolizes her awakening to herself. Mallard is sad, but the author mentions ‘She did not hear the story as many women have heard the same’ and ‘Goddess of Victory’, which makes me think that the author implies the abnormality. At the beginning of the article, it alludes to the conflict between Mallard and her surroundings, there is a huge difference between her appearance, which is how she would be in the eyes of her relatives and friends, and the inside of her. Under such differences, the traditional ethics and morals of the society I mentioned are not normal. Perhaps the author is trying to suggest such a mutation through such conflict. I used to read a story about sheep. “It lives in a sheepfold, served by his master with delicious food. It is born and raised in a sheepfold, like a frog at the bottom of a well, thinking that the sky is just that big, the sheepfold is just that big, and there will be the excellent feed and water supply on time, everything is so peaceful. Until one day, the sheepfold door was not closed, and it escaped. In the beginning, it lost its owner who loved it and raised it. It was sad and once wanted to run back. But it slowly found out that the world is so big, the food can be so rich, and it can be surrounded by birds and flowers. It turns out that there are partners in the world like themselves, everything is so free. Later, the owner found it for three days and three nights, and finally found it, and brought it back to the sheepfold.” For the ‘The Story of an Hour,’ Mallard is similar to that sheep, but she should not be treated naturally as a “sheep” that should be in the sheepfold. From this perspective, from the women who should not be able to face the news of death to the ‘goddess of victory,’ it can be learned that this is an irony to the patriarchal society that the lack of ‘self’ on the spiritual level of women. After the ‘self’ awakened, Mallard let her sister go away, wanting to continue to be immersed in the illusion of freedom, but others felt that she was in endless sorrow. Finally, “Mallard will live only for herself, not for others, not for anyone else” and ‘She arose at length and opened the door to her sister’s importunities. There was a feverish triumph in her eyes.’ Mallard became “Goddess of Victory,” Her sadness was released and her spirit was elevated.

In the final of the story, Mallard died in ecstasy, in fact, she died in despair. From the perspective of others, she was happy because her husband was not dead, however, she was desperate to death because her hope was broken. Her husband’s death saddened Mallard, which was moral, but spiritually, she felt free. When her husband appeared in front of her, which also declared her failure to pursue freedom in spirit. At this time, she was extremely fragile. Moral and spiritual blows eventually destroyed Mallard.

In conclusion, The self-awakening made Mallard recognize herself and let her feel free. It was a qualitative change, a triumph on a spiritual level, so she stood up, so she ‘won’. However, she was fragile. Her body, her will, her ‘triumph,’ were fragile. The sheep could wait in the pen for an opportunity to escape, but she could not escape, there was nothing she could do. Her husband’s death was a blow to her spirit. She lost her partner forever, but his ‘resurrection’ was spiritual destruction to her, and her fantasy of freedom was gone. Those two blows, and the huge gap between she and freedom, ultimately destroyed her. It can be considered that she can neither break away from the world she was in, nor the world she longs for. I remember a sentence in ‘The Redemption of Shawshank’: ‘Some birds aren’t meant to be caged, that’s all. Their feathers are just too bright.’ Equality and freedom are the basic rights of human beings. Even now, equality between men and women is still a goal that people pursue. Compared with men, women are weak groups, and women’s rights should be paid attention to. I come from China, and I know not only in Chinese show business but in many countries, such as Japan, girls are stereotyped. They have to be likable, submissive, and masculine. So this is not a problem for a country or a society. We need to get rid of these stereotypes and respect women’s right to pursue themselves, even if there is still a long way to go.

The Story of an Hour by Kate Chopin Research Paper. (2021, Apr 26). Retrieved from https://papersowl.com/examples/the-story-of-an-hour-by-kate-chopin-research-paper/