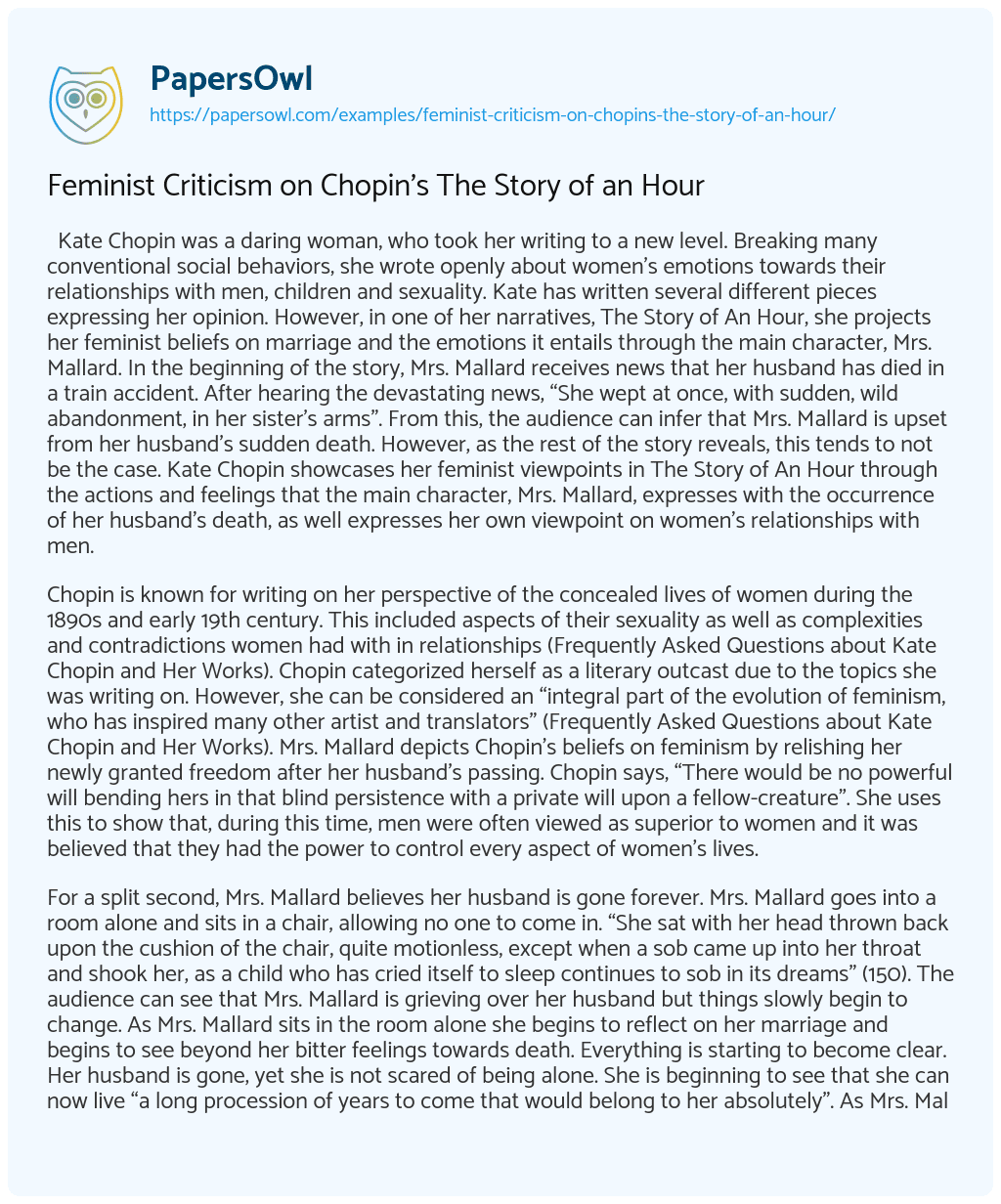 Kate Chopin was a daring woman, who took her writing to a new level. Breaking many conventional social behaviors, she wrote openly about women’s emotions towards their relationships with men, children and sexuality. Kate has written several different pieces expressing her opinion. However, in one of her narratives, The Story of An Hour, she projects her feminist beliefs on marriage and the emotions it entails through the main character, Mrs. Mallard. In the beginning of the story, Mrs. Mallard receives news that her husband has died in a train accident. After hearing the devastating news, “She wept at once, with sudden, wild abandonment, in her sister’s arms”. From this, the audience can infer that Mrs. Mallard is upset from her husband’s sudden death. However, as the rest of the story reveals, this tends to not be the case. Kate Chopin showcases her feminist viewpoints in The Story of An Hour through the actions and feelings that the main character, Mrs. Mallard, expresses with the occurrence of her husband’s death, as well expresses her own viewpoint on women’s relationships with men.

Chopin is known for writing on her perspective of the concealed lives of women during the 1890s and early 19th century. This included aspects of their sexuality as well as complexities and contradictions women had with in relationships (Frequently Asked Questions about Kate Chopin and Her Works). Chopin categorized herself as a literary outcast due to the topics she was writing on. However, she can be considered an “integral part of the evolution of feminism, who has inspired many other artist and translators” (Frequently Asked Questions about Kate Chopin and Her Works). Mrs. Mallard depicts Chopin’s beliefs on feminism by relishing her newly granted freedom after her husband’s passing. Chopin says, “There would be no powerful will bending hers in that blind persistence with a private will upon a fellow-creature”. She uses this to show that, during this time, men were often viewed as superior to women and it was believed that they had the power to control every aspect of women’s lives.

For a split second, Mrs. Mallard believes her husband is gone forever. Mrs. Mallard goes into a room alone and sits in a chair, allowing no one to come in. “She sat with her head thrown back upon the cushion of the chair, quite motionless, except when a sob came up into her throat and shook her, as a child who has cried itself to sleep continues to sob in its dreams” (150). The audience can see that Mrs. Mallard is grieving over her husband but things slowly begin to change. As Mrs. Mallard sits in the room alone she begins to reflect on her marriage and begins to see beyond her bitter feelings towards death. Everything is starting to become clear. Her husband is gone, yet she is not scared of being alone. She is beginning to see that she can now live “a long procession of years to come that would belong to her absolutely”. As Mrs. Mallard sits in the chair she feels a strange but uplifting spirit rise over her as she thinks about her husband’s passing. She opens and spreads her arms out to welcome the new feelings in. “She sank, pressed down by a physical exhaustion that haunted her body and it seemed to reach into her soul”. Knowing she is now a widow, Mrs. Mallard is no longer bound to being a typical wife; she is now free to be Louise.

There is no doubt that the audience can see that Mrs. Mallard loved her husband. Even Chopin says, “And yet she loved him-sometimes”. However, Mrs. Mallard was not in love with her husband. Taking into consideration Chopin’s beliefs, it can be inferred that Mrs. Mallard was tired of being treated like a servant by her husband. She no longer wanted to be a prisoner to the conventional social behaviors expected of a wife. She was ready to express herself and be her own person. Mrs. Mallard realized “there would be no one to live for her during those coming years; she would live for herself”. Through her self reflection, she may have felt guilty about feeling free from her husband due to his death. However, the power of being free was stronger than her guilt could ever be. Mrs. Mallard felt that love was no match for the “possession of self-assertion which she suddenly recognized as the strongest impulse of her being”. Although she still felt a small measure of love for her deceased husband, the freedom she gained from his passing was far more important to her than holding onto those feelings of love and sudden loss she faced.

At the end of the story, it is revealed that Mrs. Mallard has died. Some could say that this was part of her newly gained freedom. However, her doctors believe that “she had died of heart disease-of joy that kills”. She has not died because of heart disease, but rather from the loss of her freedom after discovering that her husband has survived the train accident. She knows that she is no longer “free, free, free”. Kate Chopin’s purpose in writing in this style was to reveal her feminist viewpoints on marriage. Mrs. Mallard experienced a small taste of a freedom but it was cut short when she found out her husband was alive. This is Chopin’s way of showing the difference between being single and being married during the time period in which the story took place, and how it had an effect on women and their emotions.

Mrs. Mallard had suffered from a life of feeling like a prisoner bound by her marriage. When her husband died she felt the chains rise off of her and felt a sense of independence. However, her independence only lasted a short while when she discovered her husband was still alive. Kate Chopin used this story as an example to show how marriage of the 1800s to the early 19th century took a toll on women’s emotions. She did this in a unique way, leaving the audience questioning what actually happened to Mrs. Mallard at the end of the piece. Perhaps it was simply a heart attack that killed her, or perhaps the thought of having to relinquish the great freedom she had gained became too much for her to bear and her heart gave out as a result of her loss.

Feminist Criticism on Chopin's The Story of an Hour. (2021, Apr 26). Retrieved from https://papersowl.com/examples/feminist-criticism-on-chopins-the-story-of-an-hour/

The Story of an Hour and Unheard of View on Marriage