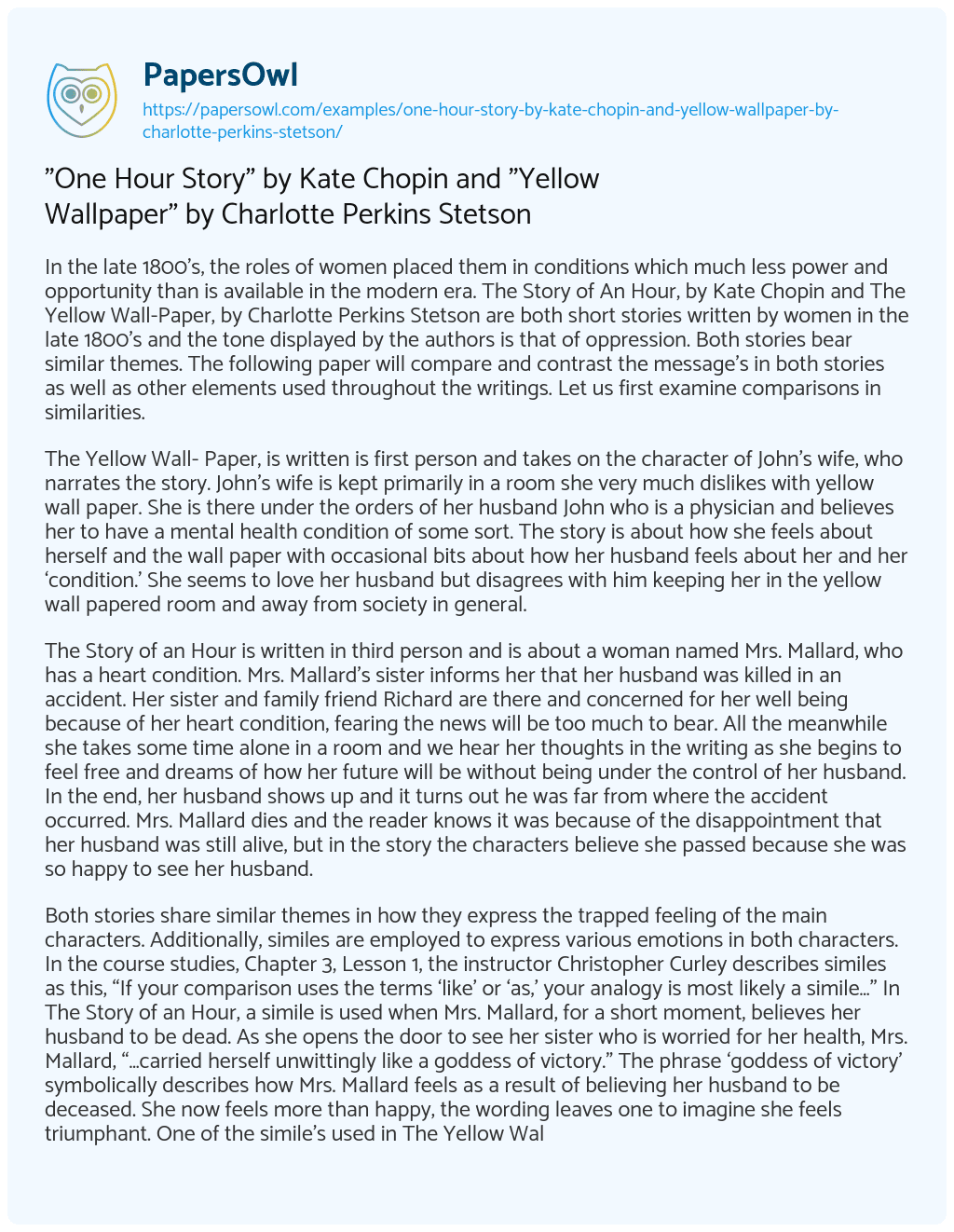 In the late 1800’s, the roles of women placed them in conditions which much less power and opportunity than is available in the modern era. The Story of An Hour, by Kate Chopin and The Yellow Wall-Paper, by Charlotte Perkins Stetson are both short stories written by women in the late 1800’s and the tone displayed by the authors is that of oppression. Both stories bear similar themes. The following paper will compare and contrast the message’s in both stories as well as other elements used throughout the writings. Let us first examine comparisons in similarities.

The Yellow Wall- Paper, is written is first person and takes on the character of John’s wife, who narrates the story. John’s wife is kept primarily in a room she very much dislikes with yellow wall paper. She is there under the orders of her husband John who is a physician and believes her to have a mental health condition of some sort. The story is about how she feels about herself and the wall paper with occasional bits about how her husband feels about her and her ‘condition.’ She seems to love her husband but disagrees with him keeping her in the yellow wall papered room and away from society in general.

The Story of an Hour is written in third person and is about a woman named Mrs. Mallard, who has a heart condition. Mrs. Mallard’s sister informs her that her husband was killed in an accident. Her sister and family friend Richard are there and concerned for her well being because of her heart condition, fearing the news will be too much to bear. All the meanwhile she takes some time alone in a room and we hear her thoughts in the writing as she begins to feel free and dreams of how her future will be without being under the control of her husband. In the end, her husband shows up and it turns out he was far from where the accident occurred. Mrs. Mallard dies and the reader knows it was because of the disappointment that her husband was still alive, but in the story the characters believe she passed because she was so happy to see her husband.

Both stories share similar themes in how they express the trapped feeling of the main characters. Additionally, similes are employed to express various emotions in both characters. In the course studies, Chapter 3, Lesson 1, the instructor Christopher Curley describes similes as this, “If your comparison uses the terms ‘like’ or ‘as,’ your analogy is most likely a simile…” In The Story of an Hour, a simile is used when Mrs. Mallard, for a short moment, believes her husband to be dead. As she opens the door to see her sister who is worried for her health, Mrs. Mallard, “…carried herself unwittingly like a goddess of victory.” The phrase ‘goddess of victory’ symbolically describes how Mrs. Mallard feels as a result of believing her husband to be deceased. She now feels more than happy, the wording leaves one to imagine she feels triumphant. One of the simile’s used in The Yellow Wall-Paper describes how John’s wife feels towards the wall paper. Johns’ wife may not have had a mental health issue, but keeping her in this particular room drives her mad. At one point, John’s wife speaks of the wall paper and states, “It slaps you in the face, knocks you down, and tramples upon you. It is like a bad dream.” Johns descriptive phrases shows more than a mere dislike for the wall paper, but an utter disgust as she compares the wall paper to a bad dream.

Another similarity to how both stories form like-mannered themes is through the use of visualization. In chapter 2, lesson 3 of the course studies, instructor Katie Surber describes visualization as, “…creating pictures in our mind as we read…Visualization brings the reading to life.” Both stories use visualization to bring the reader into the setting and feel the characters emotions.

In The Yellow Wall-Paper John’s wife describes the home they are staying in as, “The most beautiful place! It is quite along, standing well back from the road, quite three miles from the village…there are hedges and walls and gates that lock, and lots of separate little houses for the gardeners and people.” Her description creates a nice image of the surrounding setting. Later on, visualization is created in the description of the yellow wall papered room. John’s wife describes it as, “One of those sprawling flamboyant patterns committing every artistic sin. It is dull enough to confuse the eye in following, pronounced enough to constantly irritate and provoke study, and when you follow the lame uncertain curves for a little distance they suddenly commit suicide…” The descriptive use of words paints a picture in the mind of an awful wall paper that is irritating to look at.

The Story of An Hour employs the use of visualization in a way that lets the reader know both what Mrs. Mallard is seeing and feeling. Upon receiving the news of her husbands supposed death, Mrs. Mallard is looking out a window and the description is as follows, “She could see in the open square before her house the tops of trees that were all aquiver with the new spring life. The delicious breath of rain was in the air.” While everyone was worried she would be upset at hearing of the news of her husbands passing, inside she was feeling free and what she saw when she looked outside exposes those feelings as well with the use of the phrase ‘new spring life.’

Having examined many similar comparisons between these two stories, let us now look at ways in which the two stories contrast one another. The first contrast is in how the stories are composed. As mentioned earlier, The Yellow Wall-Paper was written in first person and The Story of An Hour is written in third person. While the tone in both stories is that of oppression, the way in which it is presents differs slightly. The Yellow Wall-Paper uses a lot more visualization to describe how John’s wife feels as a result of being kept in her room most of the time.

In conclusion, both stories are good representations of how perhaps many women felt during the late 1800’s. The overall theme is that of oppression and neither has a spine-chilling climatic moment, but neither need to because they convey the message they were meant to through creative writing.