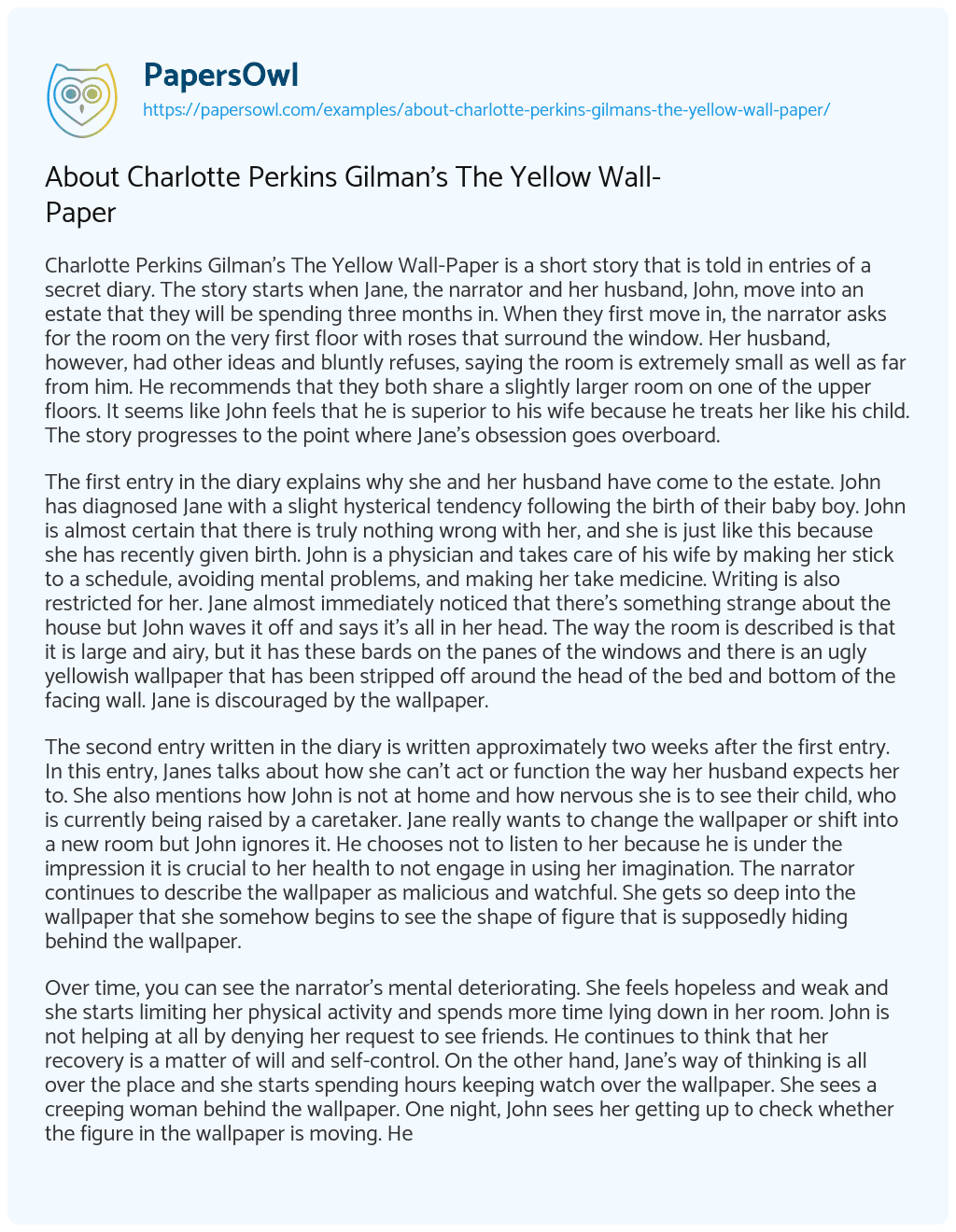 Charlotte Perkins Gilman’s The Yellow Wall-Paper is a short story that is told in entries of a secret diary. The story starts when Jane, the narrator and her husband, John, move into an estate that they will be spending three months in. When they first move in, the narrator asks for the room on the very first floor with roses that surround the window. Her husband, however, had other ideas and bluntly refuses, saying the room is extremely small as well as far from him. He recommends that they both share a slightly larger room on one of the upper floors. It seems like John feels that he is superior to his wife because he treats her like his child. The story progresses to the point where Jane’s obsession goes overboard.

The first entry in the diary explains why she and her husband have come to the estate. John has diagnosed Jane with a slight hysterical tendency following the birth of their baby boy. John is almost certain that there is truly nothing wrong with her, and she is just like this because she has recently given birth. John is a physician and takes care of his wife by making her stick to a schedule, avoiding mental problems, and making her take medicine. Writing is also restricted for her. Jane almost immediately noticed that there’s something strange about the house but John waves it off and says it’s all in her head. The way the room is described is that it is large and airy, but it has these bards on the panes of the windows and there is an ugly yellowish wallpaper that has been stripped off around the head of the bed and bottom of the facing wall. Jane is discouraged by the wallpaper.

The second entry written in the diary is written approximately two weeks after the first entry. In this entry, Janes talks about how she can’t act or function the way her husband expects her to. She also mentions how John is not at home and how nervous she is to see their child, who is currently being raised by a caretaker. Jane really wants to change the wallpaper or shift into a new room but John ignores it. He chooses not to listen to her because he is under the impression it is crucial to her health to not engage in using her imagination. The narrator continues to describe the wallpaper as malicious and watchful. She gets so deep into the wallpaper that she somehow begins to see the shape of figure that is supposedly hiding behind the wallpaper.

Over time, you can see the narrator’s mental deteriorating. She feels hopeless and weak and she starts limiting her physical activity and spends more time lying down in her room. John is not helping at all by denying her request to see friends. He continues to think that her recovery is a matter of will and self-control. On the other hand, Jane’s way of thinking is all over the place and she starts spending hours keeping watch over the wallpaper. She sees a creeping woman behind the wallpaper. One night, John sees her getting up to check whether the figure in the wallpaper is moving. Her humanity is slowly fading as her obsession increases. Problems increase as Jane’s perception of the ugly wallpaper changes. She concludes that the woman behind the pattern moves at night and stays put during the day. Her insanity increases as she lies to her husband about sleeping just so she can spend time alone in the room. She starts believing crazy things such as that John and his sister, Jennie, are also on the lookout of the wallpaper. Towards the end of the three months at the estate, the hopelessness and weakness that the narrator was feeling was restored with redefined energy from her obsession with the yellow wallpaper. She starts seeing the woman from the wallpaper creeping outside in the garden. Jane starts trying to remove the front pattern from the wallpaper and her suspicions of John and Jennie gradually increase.

The last diary entry describes the last day at the estate. Jane has spent the whole night tearing down the wallpaper to free the trapped woman. The problem reaches a high when she is not able to move the bed. She starts to refer herself as the woman trapped inside the wallpaper pattern. When John comes back and sees what’s going, he faints. Jane ignores him and continues around the room tearing the wallpaper, crawling, and creeping over him.

From the start, John has tried to take control because he feels like he’s doing the best for his wife. In reality, he was doing the total opposite. She was becoming insane right in front of his eyes and he sat there and chose to avoid it. She asked to switch rooms at one point as well. In fact who wouldn’t? The room that John had chosen was the attic, which at one point, is assumed to be a nursery. The room seemed to be more of a place of containment or prison. The bed was nailed to the floor while the windows had bars on them. Whoever designed the room didn’t even spare the stairs because they had a gate connected to it. However, the worst part of the room to the narrator seemed to be the ugly yellow wallpaper. To Jane, there was something shady about the wallpaper that disgusted her but drew her in at the same time. She starts to see that trapped woman mentioned throughout the story. She saw that woman because she was trapped inside that room. She could relate and as her obsession reached the absolute maximum, she somehow merged with that trapped woman and it became her. She started peeling the wallpaper and as her husband walks in, she shouts that she is free. The narrator feeling trapped made her lose her sense of individual and caused her to go absolutely insane.