The Spanish Flu during World War 1 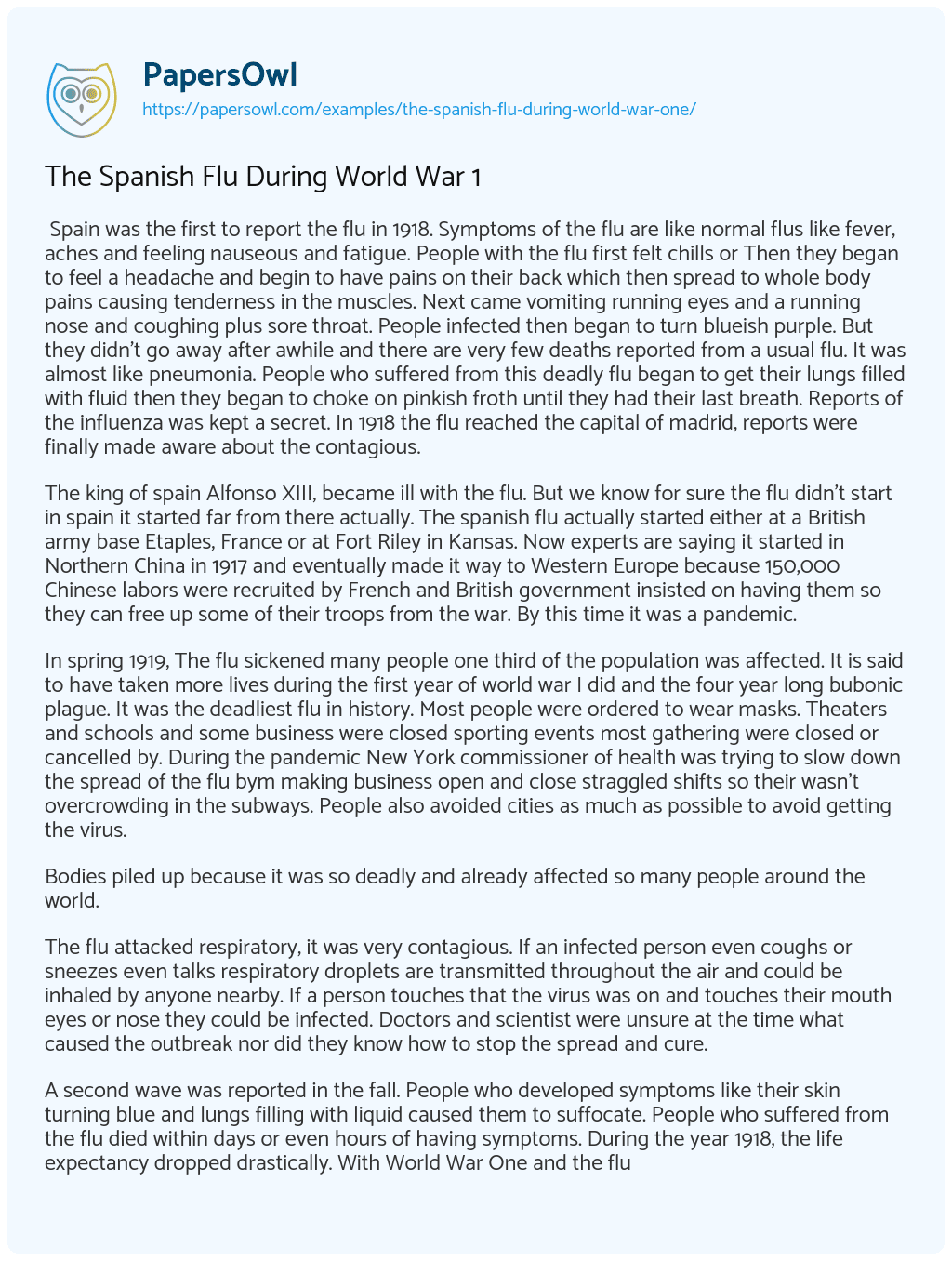 Spain was the first to report the flu in 1918. Symptoms of the flu are like normal flus like fever, aches and feeling nauseous and fatigue. People with the flu first felt chills or Then they began to feel a headache and begin to have pains on their back which then spread to whole body pains causing tenderness in the muscles. Next came vomiting running eyes and a running nose and coughing plus sore throat. People infected then began to turn blueish purple. But they didn’t go away after awhile and there are very few deaths reported from a usual flu. It was almost like pneumonia. People who suffered from this deadly flu began to get their lungs filled with fluid then they began to choke on pinkish froth until they had their last breath. Reports of the influenza was kept a secret. In 1918 the flu reached the capital of madrid, reports were finally made aware about the contagious.

The king of spain Alfonso XIII, became ill with the flu. But we know for sure the flu didn’t start in spain it started far from there actually. The spanish flu actually started either at a British army base Etaples, France or at Fort Riley in Kansas. Now experts are saying it started in Northern China in 1917 and eventually made it way to Western Europe because 150,000 Chinese labors were recruited by French and British government insisted on having them so they can free up some of their troops from the war. By this time it was a pandemic.

In spring 1919, The flu sickened many people one third of the population was affected. It is said to have taken more lives during the first year of world war I did and the four year long bubonic plague. It was the deadliest flu in history. Most people were ordered to wear masks. Theaters and schools and some business were closed sporting events most gathering were closed or cancelled by. During the pandemic New York commissioner of health was trying to slow down the spread of the flu bym making business open and close straggled shifts so their wasn’t overcrowding in the subways. People also avoided cities as much as possible to avoid getting the virus.

Bodies piled up because it was so deadly and already affected so many people around the world.

The flu attacked respiratory, it was very contagious. If an infected person even coughs or sneezes even talks respiratory droplets are transmitted throughout the air and could be inhaled by anyone nearby. If a person touches that the virus was on and touches their mouth eyes or nose they could be infected. Doctors and scientist were unsure at the time what caused the outbreak nor did they know how to stop the spread and cure.

A second wave was reported in the fall. People who developed symptoms like their skin turning blue and lungs filling with liquid caused them to suffocate. People who suffered from the flu died within days or even hours of having symptoms. During the year 1918, the life expectancy dropped drastically. With World War One and the flu going around many people were killed. The flu was not able to be cured at the time because they didn’t have the technology and the right resources to to do so.

The flu wasn’t located in one place, many soldiers in the war died from it forty percent of the navy was affected by the flu. Thirty-Six percent of the actual army was affected. Being scrunched with a lot of people in trenches and military camps the influenza was easily spread from one person to another. The flu killed more people than the weapons did. This influenza wiped out whole families it mostly targeted teenagers and younger healthy people. If someone in your household got the virus chances are you’re going to get the virus too.

In Austria, the pandemic stayed away for awhile. But by the end of the virus it had killed as many as twelve thousand people. Which does not sound like a lot compared to other countries and places where the flu spread. Parts of austria, got revisited every year to buy the deadly influenza. Some people blame Victoria for the outbreak in Austria. The government knew about the flu but did not really do anything or use precautions to stop the spread of it in Austria. But with it being so airborne it still most likely wasn’t her fault. But yet even after the virus showed up she did not at all acknowledge the presence. She did not even have restrictions to try and stop it either. They looked at three different things to try and help. They one looked at were the first outbreak happened at and used that to create ways to help stop the spread. They looked at opinions of the people who specialized in medical problems and considered what they said. Australia’s public health committee regulated the activities of state government officials.

The reason this was so important was because it killed so many people plus was a worldwide problem and world war one was happening and a lot of people died during this time. Plus if it ever came around again we have better technology to further more research and to help make it spread less.

At the end of the of the war when the flu first broke one fourth of the population ended up getting the influenza. Almost everything got closed down by 1919 five hundred thousand or more Americans died from the influenza. Sixteen million soldiers died in world was one hundred sixteen thousand were american soldiers. The flu mostly affected young adults. Fifty millon people that we know of died worldwide the survival rate was only seventy percent survival rate with a thirty percent kill rate. The flu was very serious problem adding on to the war.

The Spanish Flu During World War 1. (2022, Apr 15). Retrieved from https://papersowl.com/examples/the-spanish-flu-during-world-war-one/

How Yellow Journalism Resulted to the Spanish-American War