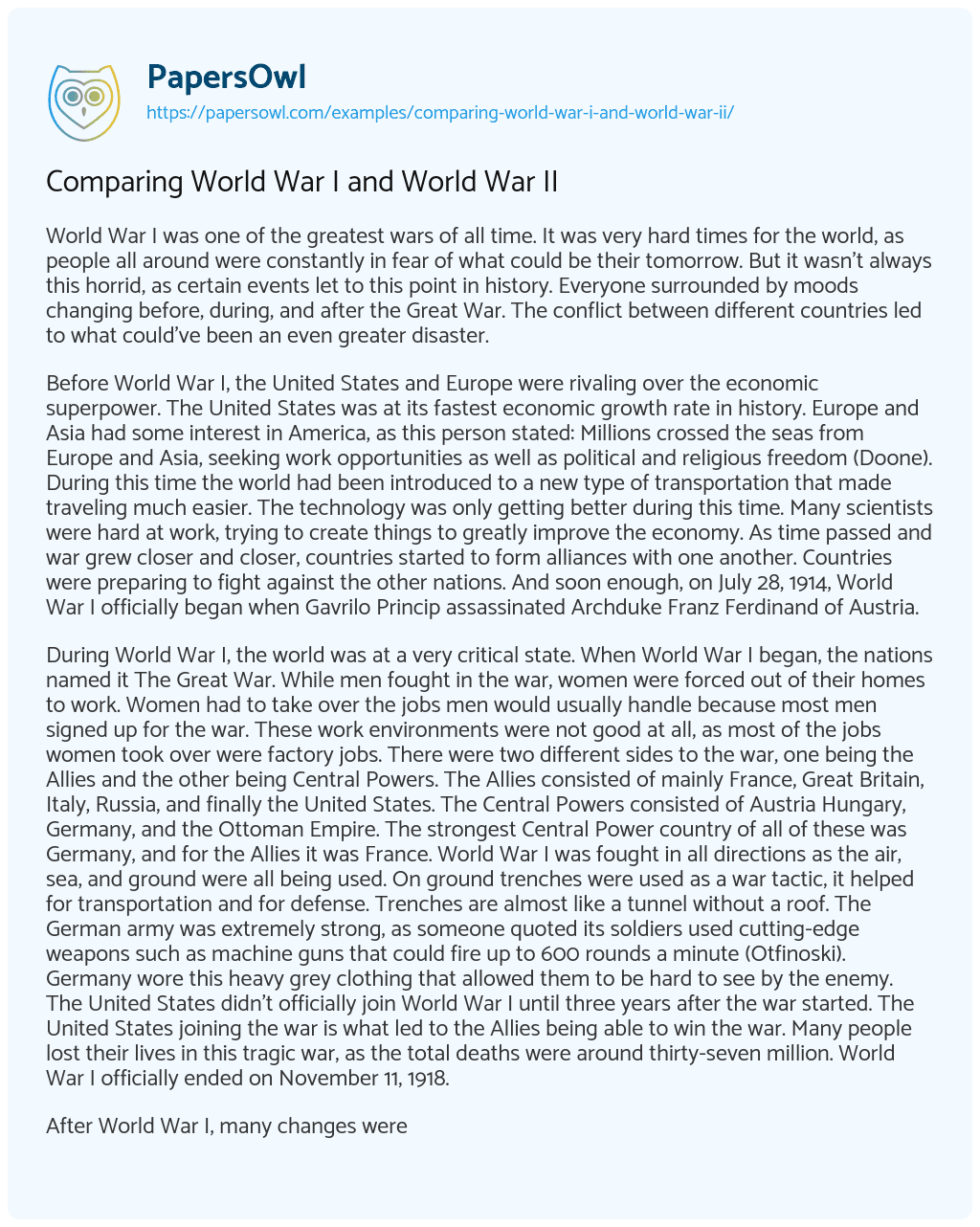 World War I was one of the greatest wars of all time. It was very hard times for the world, as people all around were constantly in fear of what could be their tomorrow. But it wasn’t always this horrid, as certain events let to this point in history. Everyone surrounded by moods changing before, during, and after the Great War. The conflict between different countries led to what could’ve been an even greater disaster.

Before World War I, the United States and Europe were rivaling over the economic superpower. The United States was at its fastest economic growth rate in history. Europe and Asia had some interest in America, as this person stated: Millions crossed the seas from Europe and Asia, seeking work opportunities as well as political and religious freedom (Doone). During this time the world had been introduced to a new type of transportation that made traveling much easier. The technology was only getting better during this time. Many scientists were hard at work, trying to create things to greatly improve the economy. As time passed and war grew closer and closer, countries started to form alliances with one another. Countries were preparing to fight against the other nations. And soon enough, on July 28, 1914, World War I officially began when Gavrilo Princip assassinated Archduke Franz Ferdinand of Austria.

During World War I, the world was at a very critical state. When World War I began, the nations named it The Great War. While men fought in the war, women were forced out of their homes to work. Women had to take over the jobs men would usually handle because most men signed up for the war. These work environments were not good at all, as most of the jobs women took over were factory jobs. There were two different sides to the war, one being the Allies and the other being Central Powers. The Allies consisted of mainly France, Great Britain, Italy, Russia, and finally the United States. The Central Powers consisted of Austria Hungary, Germany, and the Ottoman Empire. The strongest Central Power country of all of these was Germany, and for the Allies it was France. World War I was fought in all directions as the air, sea, and ground were all being used. On ground trenches were used as a war tactic, it helped for transportation and for defense. Trenches are almost like a tunnel without a roof. The German army was extremely strong, as someone quoted its soldiers used cutting-edge weapons such as machine guns that could fire up to 600 rounds a minute (Otfinoski). Germany wore this heavy grey clothing that allowed them to be hard to see by the enemy. The United States didn’t officially join World War I until three years after the war started. The United States joining the war is what led to the Allies being able to win the war. Many people lost their lives in this tragic war, as the total deaths were around thirty-seven million. World War I officially ended on November 11, 1918.

After World War I, many changes were made. The Allies wanted peace with the other countries, so they made the Treaty of Versailles. The Treaty of Versailles made many rules that the countries had to follow. Germany was forced to take the blame for starting the war and had to pay one hundred and thirty-two billion gold marks for all the destruction they caused in the war. Because Germany had to pay so much, many people who lived in Germany became poor. Many men served in the war, and those who did were scarred for life from all the fear they were put through. Britain had optional training to help all the men who served in the war.

World War I was certainly a great war. The Allied Powers fought hard to make sure they won the war. The Weapons that were used in World War I would forever change the modern warfare. Although the war was over, the clash between the nations still goes on. This conflict between different countries led to what was a great tragedy.

World War II is one of the greatest wars to ever take place. As the death count for World War II had exceeded any other war. This was truly a tragedy. Many men, women, and kids across the world had either died or suffered greatly. But there is a reason to how World War II started, as certain events led to this moment in history. The Story of World War II has a before, during, and after, each one having a different impact on the world as a whole.

War is a terrible thing, it causes deaths, pain, and many other things, but the world was already suffering before World War II. Everything went dark when the great depression hit, as many people had no home or food. Many years after World War I, United States was the first to enter the great depression, followed but many other nations. This started when the United States stock market crashed. Many banks and farms were shut down by not having enough money to proceed. Most of the world shut off their trading, not willing to trade anymore caused different countries do not have the supplies they needed. Germany ended up having great depression the worst, mainly because they had so much money to pay off from World War I. You may win the war but you still lose the battle, someone quoted, Both the winners and losers of World War I suffered in the war’s aftermath(Otfinoski). Before World War II, China and Japan were already fighting for a couple of years, Japan was trying to take land from China. After Germany unleashed an attack on Poland, Great Britain and France declared war onto Germany. World War II officially began on September 1, 1939.

During World War II, there were two sides, one being the Allies, and the other being the Axis Powers. The Allies side of the war consisted of countries such as the United States, France, Great Britain, Soviet Union, China, Canada, Australia, and Greece. While on the Axis Powers side it had countries such as Japan, Germany, Italy, Hungary, Romania, and Bulgaria. United States wasn’t always apart of World War II because they didn’t join the war until two years after it started. Even though the United States wasn’t officially joined in the war at the time, they still helped by aiding other Allies with money. Around one year after World War II started, France surrendered to Germany someone stated, As Germany attacked in the north of France, Italy attacked in the south(Otfinoski). Germany unleashed tons of bombs on Great Britain, but they fought Germany off and later they called off the air troops. Japan took action towards the United States when they bombed Pearl Harbor on December 7, 1941. After this terrible bombing, the United States decided to finally join World War II.

A man named Adolf Hitler led Germany he was a terrible man. He didn’t care for much in the world and mainly wanted destruction. Hitler hated Jews more than anything, and he wanted to see all of them dead. Hitler had the Jews captured and sent to camps, where he made them work. Hitler would let these people starve to death, but if they didn’t then later in their life he would have them thrown into a gas chamber and killed. Over six million Jews were killed in the hands of Hitler. In 1944, Germany was taken over by the Allies and during the Invasion Hitler took his own life. The United States developed the most powerful bomb, the atomic bomb, and they unleashed it on Japan killing many people. Not long after Japan realized they had lost the war and they surrendered. On September 2, 1945, the war was over and the Allies won.
After World War II, the Allies celebrated in victory. Nazi leaders were put to death and sent to prison for life. World War II was the most destructive war in history. The number of deaths during World War II was around fifty-five million. The United States gave Europe thirteen billion dollars to help them rebuild their country. World War II had a huge impact on the world forever.