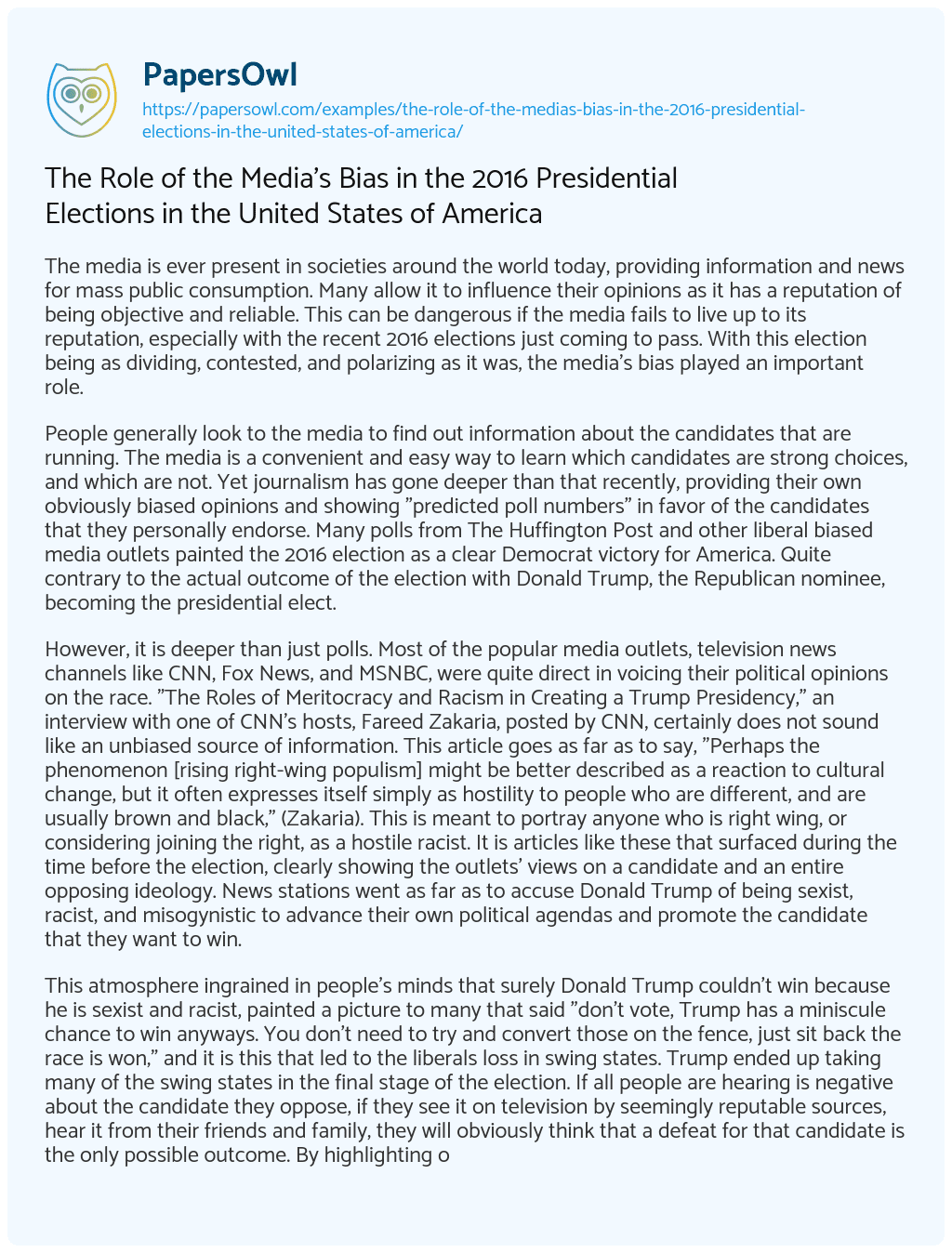 The media is ever present in societies around the world today, providing information and news for mass public consumption. Many allow it to influence their opinions as it has a reputation of being objective and reliable. This can be dangerous if the media fails to live up to its reputation, especially with the recent 2016 elections just coming to pass. With this election being as dividing, contested, and polarizing as it was, the media’s bias played an important role.

People generally look to the media to find out information about the candidates that are running. The media is a convenient and easy way to learn which candidates are strong choices, and which are not. Yet journalism has gone deeper than that recently, providing their own obviously biased opinions and showing “predicted poll numbers” in favor of the candidates that they personally endorse. Many polls from The Huffington Post and other liberal biased media outlets painted the 2016 election as a clear Democrat victory for America. Quite contrary to the actual outcome of the election with Donald Trump, the Republican nominee, becoming the presidential elect.

However, it is deeper than just polls. Most of the popular media outlets, television news channels like CNN, Fox News, and MSNBC, were quite direct in voicing their political opinions on the race. “The Roles of Meritocracy and Racism in Creating a Trump Presidency,” an interview with one of CNN’s hosts, Fareed Zakaria, posted by CNN, certainly does not sound like an unbiased source of information. This article goes as far as to say, “Perhaps the phenomenon [rising right-wing populism] might be better described as a reaction to cultural change, but it often expresses itself simply as hostility to people who are different, and are usually brown and black,” (Zakaria). This is meant to portray anyone who is right wing, or considering joining the right, as a hostile racist. It is articles like these that surfaced during the time before the election, clearly showing the outlets’ views on a candidate and an entire opposing ideology. News stations went as far as to accuse Donald Trump of being sexist, racist, and misogynistic to advance their own political agendas and promote the candidate that they want to win.

This atmosphere ingrained in people’s minds that surely Donald Trump couldn’t win because he is sexist and racist, painted a picture to many that said “don’t vote, Trump has a miniscule chance to win anyways. You don’t need to try and convert those on the fence, just sit back the race is won,” and it is this that led to the liberals loss in swing states. Trump ended up taking many of the swing states in the final stage of the election. If all people are hearing is negative about the candidate they oppose, if they see it on television by seemingly reputable sources, hear it from their friends and family, they will obviously think that a defeat for that candidate is the only possible outcome. By highlighting one candidate’s negatives almost exclusively, the media painted this image of a popular opinion that Hillary would win seemingly without a doubt. People were told that their candidate is going to win. So, why try to convince others? Why try to change people’s opinions? Why even show up to vote at all?

By presenting only one narrative and rarely opening up to the other side’s opinions, the media effectively removed itself from the conversation. Rather than a place of open discussions, it became a place to confirm what people already thought. They no longer were relevant to anyone that was looking to find objective, opinionless reporting that the media is supposed to stand for. This bubble that they placed themselves in added nothing new to their content, nothing new to discuss, and excluded everyone that did not believe what they did.

The Huffington Post, Buzzfeed, The Guardian, and many more with varying reputability. Most of the popular online news companies were even worse than the televised media. Outright calling the elections outcome, “a tragedy for the Constitution, and a triumph for the forces, at home and abroad, of nativism, authoritarianism, misogyny, and racism,” (Remnick). If the televised media subtly paints a picture of their beliefs, the online news sources slap you with the paintbrush and scream “Racist!” in your ear. With the youth of today being the most technologically adept of any before, it’s not hard to understand how these news outlets are picking up so much steam.

The protests that have gone on, and likely will go on, are largely caused by the media’s portrait of a liberal reality. When the race was going on, many were buying into this idea of Hillary’s success being guaranteed. When their bubble was popped, and reality proved that they were incorrect, they took the only course of action they knew how to do, protest and recreate the bubble with people that share their views. It’s not difficult to understand why there are so many marches, these people were drawn into a separate, safe reality by the media. The media outlet Newsweek, left its partner Topix Media to produce the magazines set to release when the presidential elect was announced. However, Topix Media prematurely let out 125,000 copies of a magazine commemorating Hillary Clinton’s win titled “Madame President,” because, “it was safe to dispatch only the version detailing ‘Hillary Clinton’s historic journey to the White House’, as the cover put it” (Crilly para. 3).

Overall, the media’s role in the 2016 presidential election was one of biased swaying of the public opinion. Whether it be from the televised media, or the growing scene of online journalism, the media conveyed a clear message to the country of who it was opposed to. When the media gets involved in politics it can lead to unintended outcomes and outrage. In a world so affected by media, it is impossible for said media to present one narrative and expect there not to be consequences. My only hope is that people learn from this election’s outcome and don’t put all of their trust into the words, opinions, and polls that they see on tv or online, no matter how credible the sources may appear.

The Role of the Media's Bias in the 2016 Presidential Elections in the United States of America. (2022, Dec 17). Retrieved from https://papersowl.com/examples/the-role-of-the-medias-bias-in-the-2016-presidential-elections-in-the-united-states-of-america/

Presidential Elections and the Issue of Race