The Rising of Christianity and the Fall of Buddhism 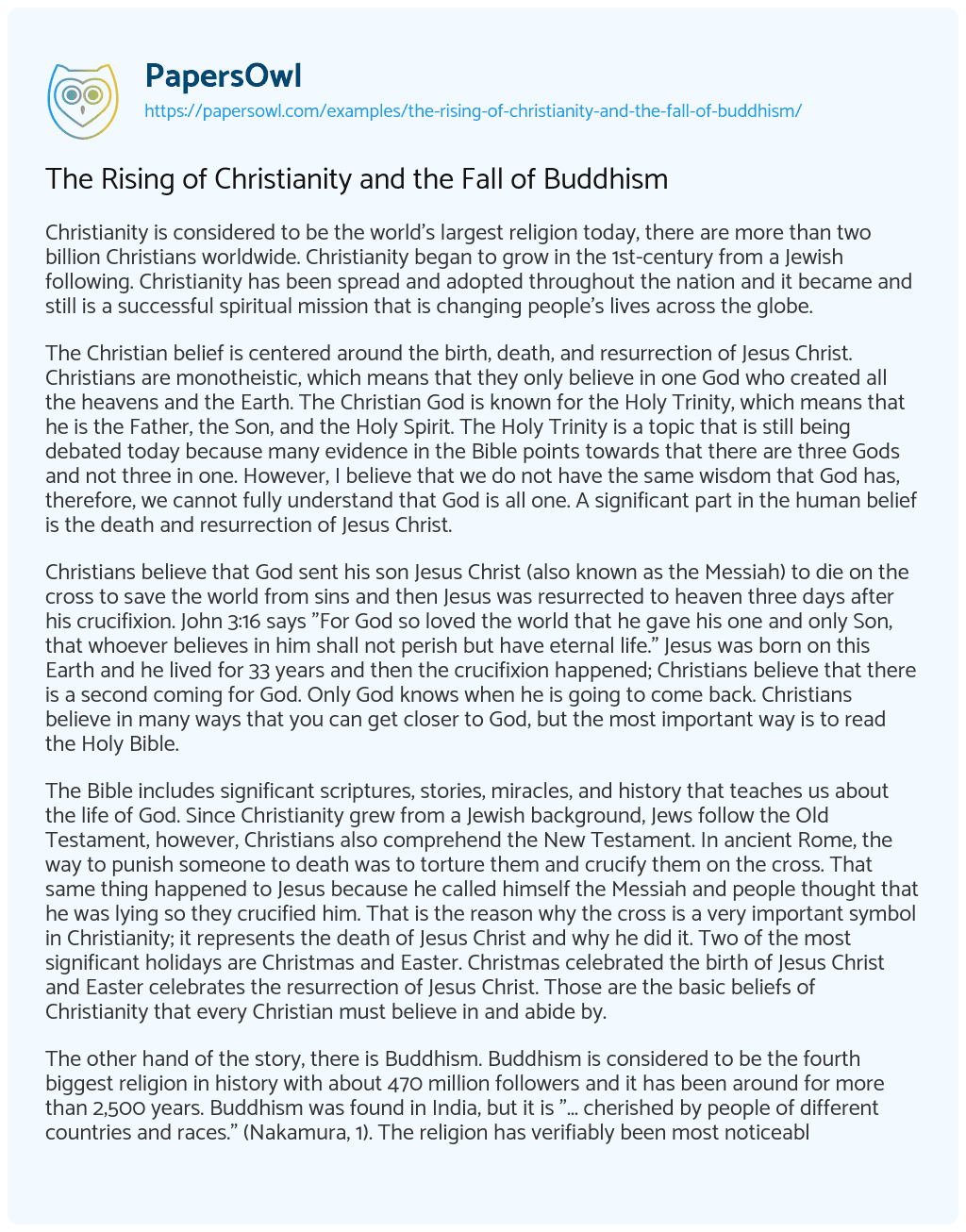 Christianity is considered to be the world’s largest religion today, there are more than two billion Christians worldwide. Christianity began to grow in the 1st-century from a Jewish following. Christianity has been spread and adopted throughout the nation and it became and still is a successful spiritual mission that is changing people’s lives across the globe.

The Christian belief is centered around the birth, death, and resurrection of Jesus Christ. Christians are monotheistic, which means that they only believe in one God who created all the heavens and the Earth. The Christian God is known for the Holy Trinity, which means that he is the Father, the Son, and the Holy Spirit. The Holy Trinity is a topic that is still being debated today because many evidence in the Bible points towards that there are three Gods and not three in one. However, I believe that we do not have the same wisdom that God has, therefore, we cannot fully understand that God is all one. A significant part in the human belief is the death and resurrection of Jesus Christ.

Christians believe that God sent his son Jesus Christ (also known as the Messiah) to die on the cross to save the world from sins and then Jesus was resurrected to heaven three days after his crucifixion. John 3:16 says “For God so loved the world that he gave his one and only Son, that whoever believes in him shall not perish but have eternal life.” Jesus was born on this Earth and he lived for 33 years and then the crucifixion happened; Christians believe that there is a second coming for God. Only God knows when he is going to come back. Christians believe in many ways that you can get closer to God, but the most important way is to read the Holy Bible.

The Bible includes significant scriptures, stories, miracles, and history that teaches us about the life of God. Since Christianity grew from a Jewish background, Jews follow the Old Testament, however, Christians also comprehend the New Testament. In ancient Rome, the way to punish someone to death was to torture them and crucify them on the cross. That same thing happened to Jesus because he called himself the Messiah and people thought that he was lying so they crucified him. That is the reason why the cross is a very important symbol in Christianity; it represents the death of Jesus Christ and why he did it. Two of the most significant holidays are Christmas and Easter. Christmas celebrated the birth of Jesus Christ and Easter celebrates the resurrection of Jesus Christ. Those are the basic beliefs of Christianity that every Christian must believe in and abide by.

The other hand of the story, there is Buddhism. Buddhism is considered to be the fourth biggest religion in history with about 470 million followers and it has been around for more than 2,500 years. Buddhism was found in India, but it is “… cherished by people of different countries and races.” (Nakamura, 1). The religion has verifiably been most noticeable in East and Southeast Asia, however, its impact is developing in the West. Many of the Buddhist ideas contrast with other religions, such as Christianity. Gotama, the founder of Buddhism ” … was born in Nepal, the son of a raja, ruling a small state near the north-east border of India.” (Nakamura, 1).

Adherents of Buddhism don’t recognize a preeminent god or divinity. They rather center around accomplishing edification—a condition of internal harmony and knowledge. At the point when devotees achieve this otherworldly echelon, they’re said to have encountered nirvana. Buddha is viewed as a phenomenal man, yet not a divine being. The word Buddha signifies “illuminated.” The way to edification is achieved by using ethical quality, reflection, and intelligence. Buddhists regularly contemplate in light of the fact that they have been awakening by the truth. There are numerous methods of insight and understandings inside Buddhism, making it a tolerant and developing religion. A few researchers don’t perceive Buddhism as a sorted out religion, but instead, a “lifestyle” or a “profound custom.” Buddhism urges its followers to ignore liberality yet encourages forbearance.

Buddha’s most vital lessons, known as The Four Noble Truths, are basics to understanding the religion. Buddhists grasps the ideas of karma, which is the law of circumstances and logical results, and resurrection, which is the nonstop cycle of resurrection. Buddhist can worship in sanctuaries or in their very own homes. Buddhist priests, or bhikkhus, pursue a strict set of principles, which incorporates celibacy and abstinence.

The Rising of Christianity and the Fall of Buddhism. (2019, Nov 03). Retrieved from https://papersowl.com/examples/the-rising-of-christianity-and-the-fall-of-buddhism/