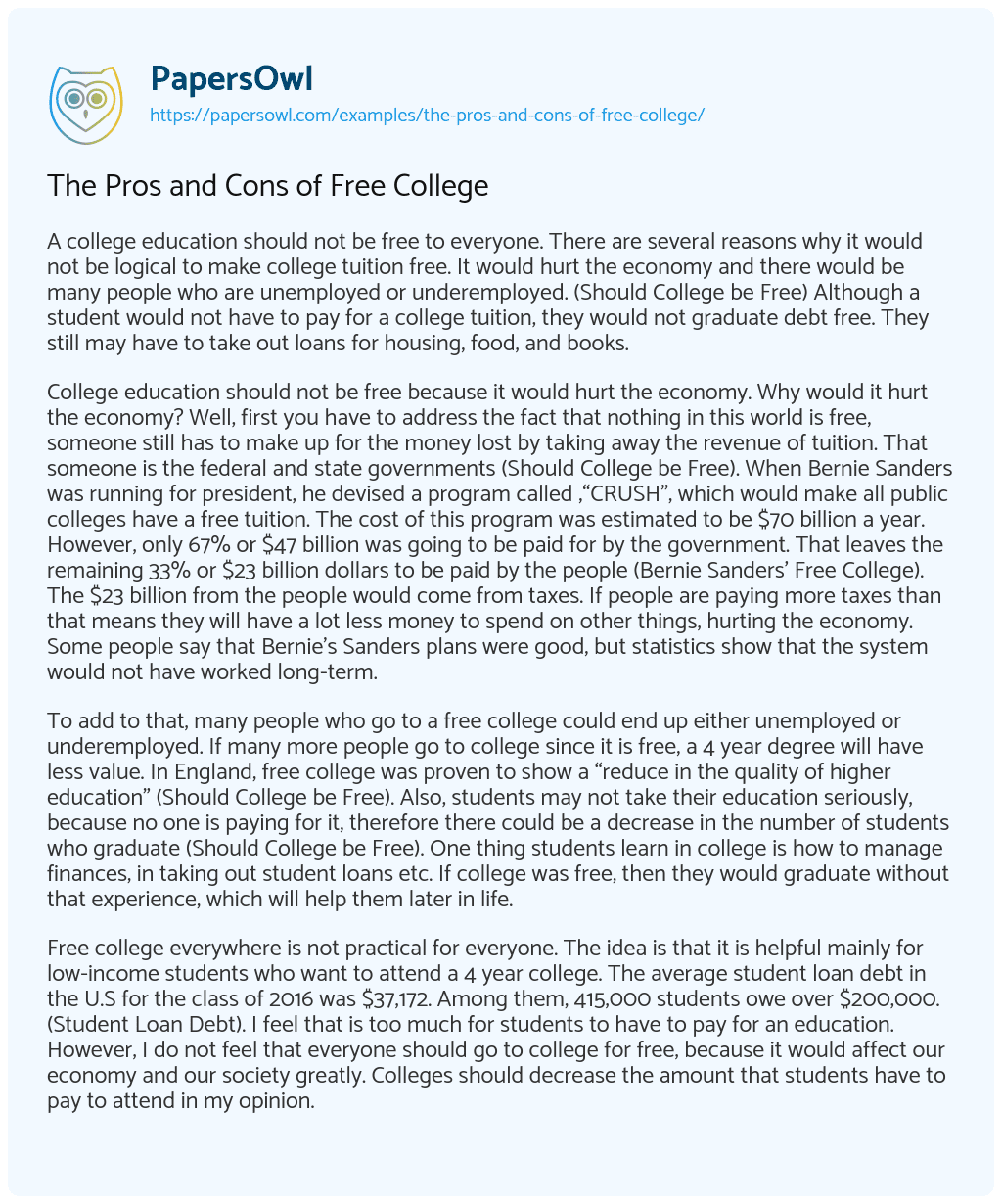 A college education should not be free to everyone. There are several reasons why it would not be logical to make college tuition free. It would hurt the economy and there would be many people who are unemployed or underemployed. (Should College be Free) Although a student would not have to pay for a college tuition, they would not graduate debt free. They still may have to take out loans for housing, food, and books.

College education should not be free because it would hurt the economy. Why would it hurt the economy? Well, first you have to address the fact that nothing in this world is free, someone still has to make up for the money lost by taking away the revenue of tuition. That someone is the federal and state governments (Should College be Free). When Bernie Sanders was running for president, he devised a program called ,“CRUSH”, which would make all public colleges have a free tuition. The cost of this program was estimated to be $70 billion a year. However, only 67% or $47 billion was going to be paid for by the government. That leaves the remaining 33% or $23 billion dollars to be paid by the people (Bernie Sanders’ Free College). The $23 billion from the people would come from taxes. If people are paying more taxes than that means they will have a lot less money to spend on other things, hurting the economy. Some people say that Bernie’s Sanders plans were good, but statistics show that the system would not have worked long-term.

To add to that, many people who go to a free college could end up either unemployed or underemployed. If many more people go to college since it is free, a 4 year degree will have less value. In England, free college was proven to show a “reduce in the quality of higher education” (Should College be Free). Also, students may not take their education seriously, because no one is paying for it, therefore there could be a decrease in the number of students who graduate (Should College be Free). One thing students learn in college is how to manage finances, in taking out student loans etc. If college was free, then they would graduate without that experience, which will help them later in life.

Free college everywhere is not practical for everyone. The idea is that it is helpful mainly for low-income students who want to attend a 4 year college. The average student loan debt in the U.S for the class of 2016 was $37,172. Among them, 415,000 students owe over $200,000. (Student Loan Debt). I feel that is too much for students to have to pay for an education. However, I do not feel that everyone should go to college for free, because it would affect our economy and our society greatly. Colleges should decrease the amount that students have to pay to attend in my opinion.

The Pros and Cons of Free College. (2019, Mar 29). Retrieved from https://papersowl.com/examples/the-pros-and-cons-of-free-college/

Should College be Free: Pros and Cons

Why College Tuition should be Free

Reasons the First Two Years of College should be Free

Why Community College should be Free