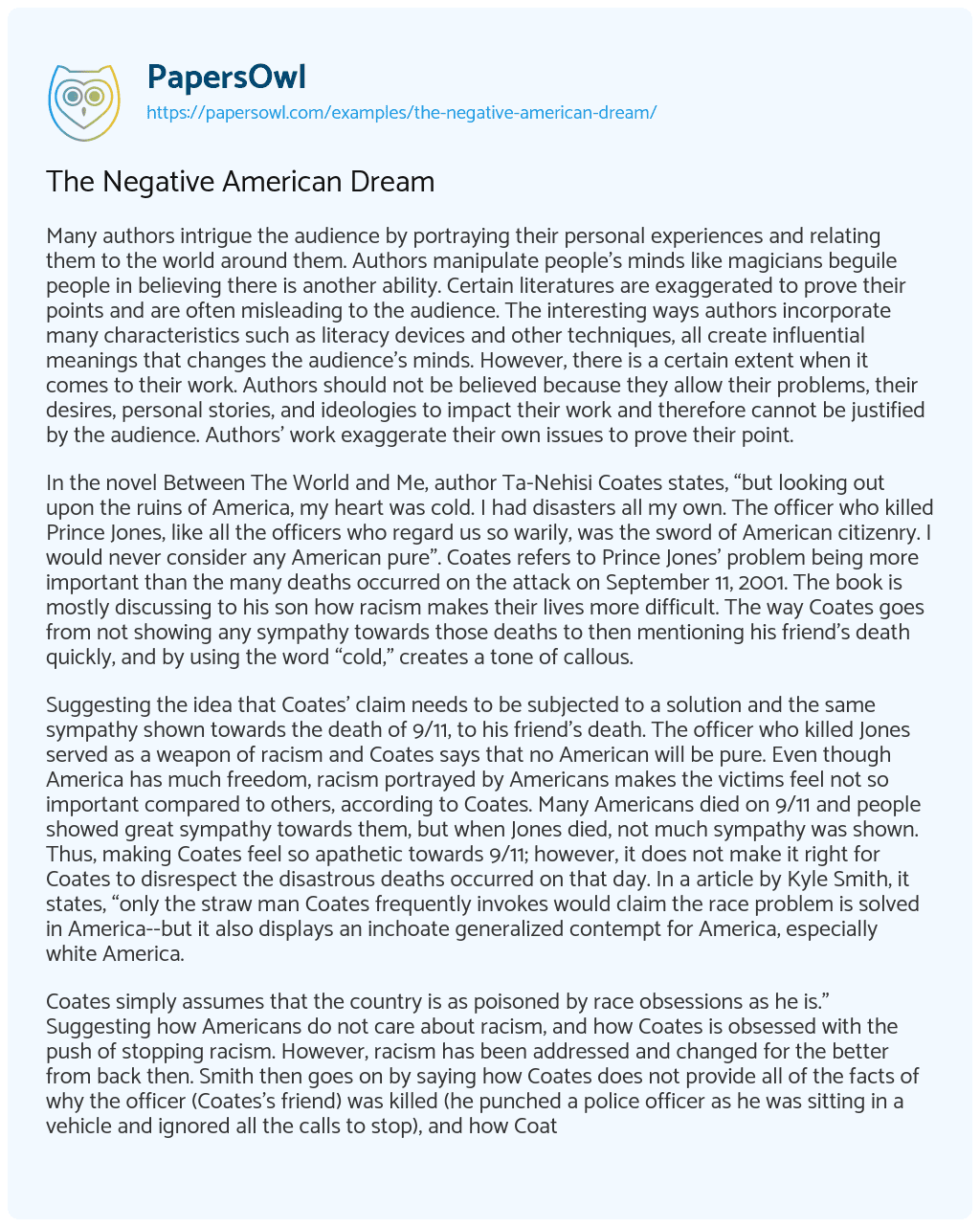 Many authors intrigue the audience by portraying their personal experiences and relating them to the world around them. Authors manipulate people’s minds like magicians beguile people in believing there is another ability. Certain literatures are exaggerated to prove their points and are often misleading to the audience. The interesting ways authors incorporate many characteristics such as literacy devices and other techniques, all create influential meanings that changes the audience’s minds. However, there is a certain extent when it comes to their work. Authors should not be believed because they allow their problems, their desires, personal stories, and ideologies to impact their work and therefore cannot be justified by the audience. Authors’ work exaggerate their own issues to prove their point.

In the novel Between The World and Me, author Ta-Nehisi Coates states, “but looking out upon the ruins of America, my heart was cold. I had disasters all my own. The officer who killed Prince Jones, like all the officers who regard us so warily, was the sword of American citizenry. I would never consider any American pure”. Coates refers to Prince Jones’ problem being more important than the many deaths occurred on the attack on September 11, 2001. The book is mostly discussing to his son how racism makes their lives more difficult. The way Coates goes from not showing any sympathy towards those deaths to then mentioning his friend’s death quickly, and by using the word “cold,” creates a tone of callous.

Suggesting the idea that Coates’ claim needs to be subjected to a solution and the same sympathy shown towards the death of 9/11, to his friend’s death. The officer who killed Jones served as a weapon of racism and Coates says that no American will be pure. Even though America has much freedom, racism portrayed by Americans makes the victims feel not so important compared to others, according to Coates. Many Americans died on 9/11 and people showed great sympathy towards them, but when Jones died, not much sympathy was shown. Thus, making Coates feel so apathetic towards 9/11; however, it does not make it right for Coates to disrespect the disastrous deaths occurred on that day. In a article by Kyle Smith, it states, “only the straw man Coates frequently invokes would claim the race problem is solved in America–but it also displays an inchoate generalized contempt for America, especially white America.

Coates simply assumes that the country is as poisoned by race obsessions as he is.” Suggesting how Americans do not care about racism, and how Coates is obsessed with the push of stopping racism. However, racism has been addressed and changed for the better from back then. Smith then goes on by saying how Coates does not provide all of the facts of why the officer (Coates’s friend) was killed (he punched a police officer as he was sitting in a vehicle and ignored all the calls to stop), and how Coates sets up a bad example for his son. Smith says, “yet Coates is encouraging his son to treat Brown’s death as an anchor on his every movement. He is setting up his son for a haunted, angry existence.” This suggests how Brown’s death causes Coates to act and feel a certain way for every issue.

Basically, Coates believe the world is very cruel and that he needs to warn his son of it. However, that is not always the case as it was the action done by to officer, and not the other way around. Problems faced by each individual should be considered with respect and not make one more important than the other. As authors manipulate their work and make everyone seek a solution to fix the issue or show sympathy towards it. In addition, authors imply their desires for better improvement but are contradicted within their personal stories. In the prologue of the Invisible Man it states, “Say, a figure in a nightmare which the sleeper tries with all his strength to destroy. It’s when you feel like this that, out of resentment, you begin to bump people back. And, let me confess, you feel that way most of the time” (Ellison).

Ellison uses a metaphor to compare the audience’s feeling to a phantom to others and a figure in a nightmare which the sleeper tries to destroy a phantom with all their strength. The literary device causes the audience to relate with the emotions of the author, which forces the audience to understand the real struggles. The words used in the prologue such as phantom, nightmare, and resentment, all create a tone of indignation and, later in the prologue, a tone of impetuousness and amusement. Impetuousness is shown when the character bumps into an oblivious man as they both walk at night, and not controlling his actions provoked in this scene. The author uses much imagery and an anecdote to portray the much hatred against the man for not seeing him.

The character’s feeling goes from feeling ashamed to an amused one as he realizes that the man mugged from the “invisible man” in his mind, and not actually the character. That the ignored figured in the man came out an got a taste of his own medicine. The change from indignation to amusement portrays the author to beguile the audience to believe one thing. However, the author’s desire was to be more noticed and feel like a human in other’s eyes, but provokes such a cruel action that contradicts such a desire. Suggesting that racism is not the answer for people to ignore people, but the certain actions that are done by people.

All coming down to not believe such statements and their desires as they do cowardly acts; and prove not all people should be entitled as they are just as capable of doing cruel intentions. Authors’ work should not be believed because their ideologies cannot be justified overall. In F. Scott Fitzgerald’s The Great Gatsby, it states, “Gatsby believed in the green light, the orgastic future that year by year recedes before us. It eluded us then, but that’s no matter-tomorrow we will run faster, stretch out our arms farther…. And one fine morning– So we beat on, boats against the current, borne back ceaselessly into the past”. The green light symbolizes the American dream changing as America enters a new era in time.

That America will never go back to itself again because of the permanent change to a new era of lost-worth of money, and that America has lost the true meaning of freedom. However, many historical events done in the past have made America worthy and more free than ever before. Such as the end of women suffrage by adding the Nineteenth Amendment to the Constitution, and the Civil Rights Movement. As well as the development of new music, art, and the mix of culture that created more job opportunities and a better chance to be successful for everyone.  In addition, if a person contains loads of money, then that was the American dream; but the country now changed to where an American dream contains more of a meaningful value.

Although the American dream seems to have changed in a negative way according to the author, there has been many things done to create more opportunities; suggesting the claim that author’s work cannot be justified. Furthermore, authors write how they feel about certain things yet become false when they prove their claims. The manipulation of events to weigh out real world problems, the desire of something but are contradicted in their personal stories, and the writer’s claim cannot be justified fully, which proves that authors should not be trusted In addition, the reader should know facts and other ideas to know for sure if the author is saying the truth, or portraying the right idea towards the audience.

Between the World and me and the Concept of “The Dream”