Between the World and me and the Concept of “The Dream” 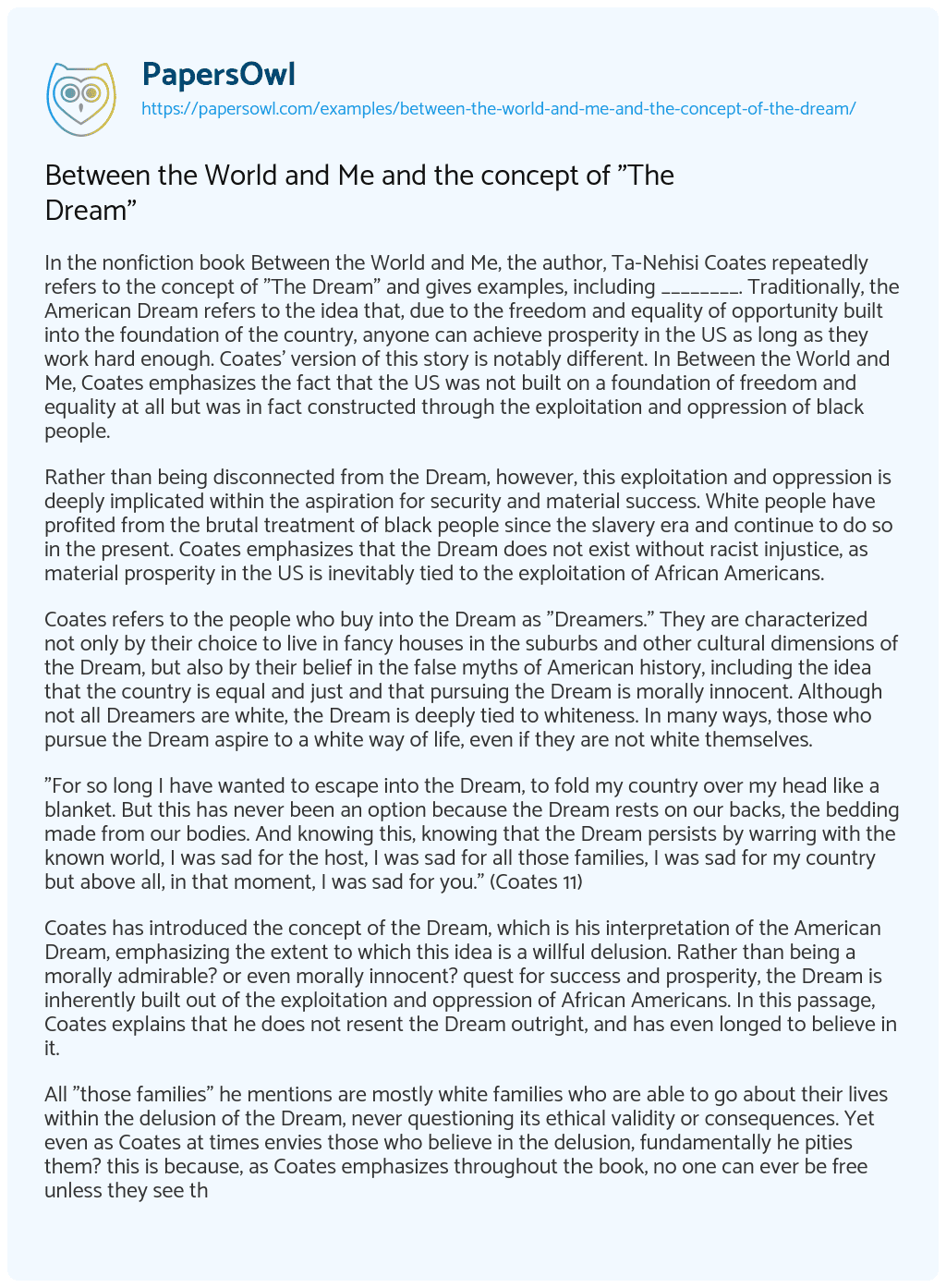 In the nonfiction book Between the World and Me, the author, Ta-Nehisi Coates repeatedly refers to the concept of “The Dream” and gives examples, including ________. Traditionally, the American Dream refers to the idea that, due to the freedom and equality of opportunity built into the foundation of the country, anyone can achieve prosperity in the US as long as they work hard enough. Coates’ version of this story is notably different. In Between the World and Me, Coates emphasizes the fact that the US was not built on a foundation of freedom and equality at all but was in fact constructed through the exploitation and oppression of black people.

Rather than being disconnected from the Dream, however, this exploitation and oppression is deeply implicated within the aspiration for security and material success. White people have profited from the brutal treatment of black people since the slavery era and continue to do so in the present. Coates emphasizes that the Dream does not exist without racist injustice, as material prosperity in the US is inevitably tied to the exploitation of African Americans.

Coates refers to the people who buy into the Dream as “Dreamers.” They are characterized not only by their choice to live in fancy houses in the suburbs and other cultural dimensions of the Dream, but also by their belief in the false myths of American history, including the idea that the country is equal and just and that pursuing the Dream is morally innocent. Although not all Dreamers are white, the Dream is deeply tied to whiteness. In many ways, those who pursue the Dream aspire to a white way of life, even if they are not white themselves.

Coates has introduced the concept of the Dream, which is his interpretation of the American Dream, emphasizing the extent to which this idea is a willful delusion. Rather than being a morally admirable? or even morally innocent? quest for success and prosperity, the Dream is inherently built out of the exploitation and oppression of African Americans. In this passage, Coates explains that he does not resent the Dream outright, and has even longed to believe in it.

All “those families” he mentions are mostly white families who are able to go about their lives within the delusion of the Dream, never questioning its ethical validity or consequences. Yet even as Coates at times envies those who believe in the delusion, fundamentally he pities them? this is because, as Coates emphasizes throughout the book, no one can ever be free unless they see the world as it really is, rather than buying into myths. The Dream only exists by “warring with the known world,” and thus those who pursue the Dream cannot fully engage or be at peace with the world around them.

“The Dream thrives on generalization, on limiting the number of possible questions, on privileging immediate answers. The Dream is the enemy of all art, courageous thinking, and honest writing.” (Coates 50). Coates has been describing his intellectual development while at Howard, much of which took place outside of the confines of the university itself and in the city of Washington DC. He is particularly inspired by the artistic and intellectual work of other black people, and in this passage reaches the conclusion that the Dream prevents “courageous thinking and honest writing.”

Throughout the book, Coates expresses a suspicion of false belief and easy answers. For him, life cannot be freely lived without confrontation with the world as it really is, no matter how painful this may be. In many ways, this assertion is supported by the history of artistic and intellectual expression, which has often thrived in situations of duress and which has been used by oppressed peoples as a method for making sense of the world.

Between the World and Me and the concept of "The Dream". (2019, Nov 18). Retrieved from https://papersowl.com/examples/between-the-world-and-me-and-the-concept-of-the-dream/

Review of between the World and me