The is Immigration Discrimination 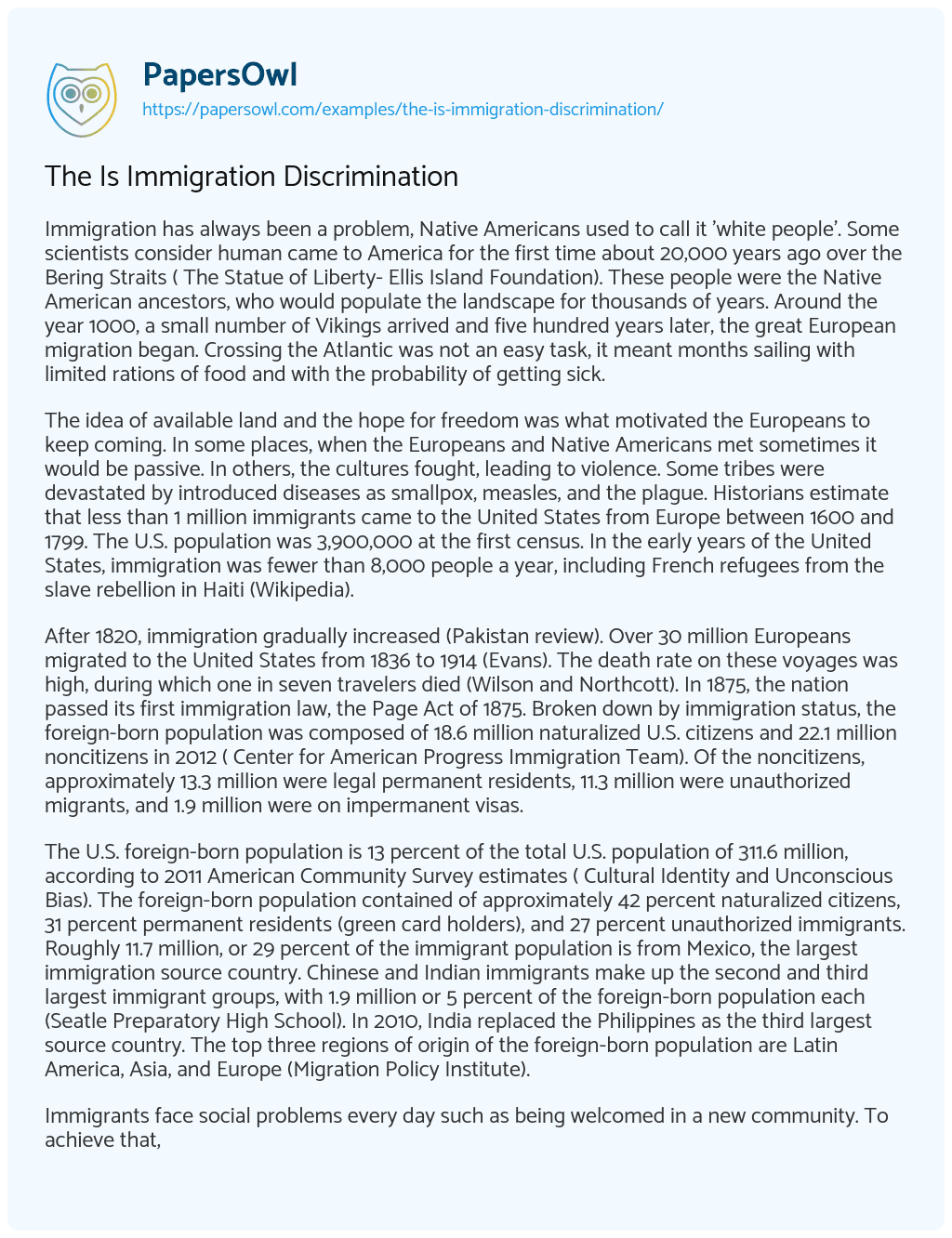 Immigration has always been a problem, Native Americans used to call it ‘white people’. Some scientists consider human came to America for the first time about 20,000 years ago over the Bering Straits ( The Statue of Liberty- Ellis Island Foundation). These people were the Native American ancestors, who would populate the landscape for thousands of years. Around the year 1000, a small number of Vikings arrived and five hundred years later, the great European migration began. Crossing the Atlantic was not an easy task, it meant months sailing with limited rations of food and with the probability of getting sick.

The idea of available land and the hope for freedom was what motivated the Europeans to keep coming. In some places, when the Europeans and Native Americans met sometimes it would be passive. In others, the cultures fought, leading to violence. Some tribes were devastated by introduced diseases as smallpox, measles, and the plague. Historians estimate that less than 1 million immigrants came to the United States from Europe between 1600 and 1799. The U.S. population was 3,900,000 at the first census. In the early years of the United States, immigration was fewer than 8,000 people a year, including French refugees from the slave rebellion in Haiti (Wikipedia).

After 1820, immigration gradually increased (Pakistan review). Over 30 million Europeans migrated to the United States from 1836 to 1914 (Evans). The death rate on these voyages was high, during which one in seven travelers died (Wilson and Northcott). In 1875, the nation passed its first immigration law, the Page Act of 1875. Broken down by immigration status, the foreign-born population was composed of 18.6 million naturalized U.S. citizens and 22.1 million noncitizens in 2012 ( Center for American Progress Immigration Team). Of the noncitizens, approximately 13.3 million were legal permanent residents, 11.3 million were unauthorized migrants, and 1.9 million were on impermanent visas.

Immigrants face social problems every day such as being welcomed in a new community. To achieve that, immigrants must face a lot of barriers (Oxford Area School District). Refugee and asylum seekers may come across discrimination and racism based on race, ethnicity, religion, etc. They also come across racial barriers in accessing employment and education; they do not have close friends, family and most of the time they face unemployment (Bueno). Many immigrants report that when they first leave it’s the cultural differences that really make a big impression. This can vary from social customs to more significant issues such as attitudes towards gender, religious diversity, ethnicity and sexuality, which can all be vastly different in a new country.

Being a mature age migrant or refugee, cultural barriers pose a very serious threat to the possibility of finding work. Different religious beliefs, different ways of thinking and behaving and having different attitudes can make their lives very traumatic (Edith Cowan University). The next barrier many new immigrants have in common when starting life in a new country is finding appropriate employment. Language skills could be in demand in a variety of settings; interpreters may be in desperately short supply. Immigrants may also be concerned about immigration and naturalization laws such as the Immigration Act of 1990 (IMMACT), which limits the annual number of immigrants to 700,000.

AEDPA and IIRARA demonstrate many categories of criminal activity for which immigrants, including green card holders, can be deported and have executed mandatory detention for certain types of cases. In contrast to economic migrants, who generally do not gain legal admission, refugees can gain legal status through a process of looking for and receiving asylum, either by being designated a refugee, or by physically entering the United States and requesting asylum status afterward. A specific number of legally refugees, who apply either for asylum overseas or after arriving in the United States admitted annually. In the year 2014, the number of asylum seekers accepted into the U.S. was about 120,000.

This is related with about 31,000 in the UK and 13,500 in Canada (Asylum Trends 2014 (PDF)). Japan accepted just 41 refugees for resettlement in 2007 (Refugees in Japan, Wikipedia). In fiscal year 2008, the Office of Refugee Resettlement (ORR) appropriated over $655 million for long-term services provided to refugees after their arrival in the US (Office of Refugee Resettlement: Programs ). The Obama administration has kept to about the same level (Haines) (Wikipedia).

A common problem for asylum seekers in the current system for is the lack of resources. The asylum offices in the United States receive more applications than they can process every month and year. Immigrants face all kinds of problems every day. For instance, social problem including discrimination, cultural differences or even religious diversity; economic problems like inequality and employment issues; legal problems such as laws concerning immigration and naturalization or asylum for refugees and others (Wikipedia). Charles Rangel Quote: “Immigrants have faced huge obstacles to achieving the American Dream, yet have persevered to overcome them (Rangel)’’.

The Is Immigration Discrimination. (2022, Feb 13). Retrieved from https://papersowl.com/examples/the-is-immigration-discrimination/

The Immigration and Poverty