The Immigration and Poverty 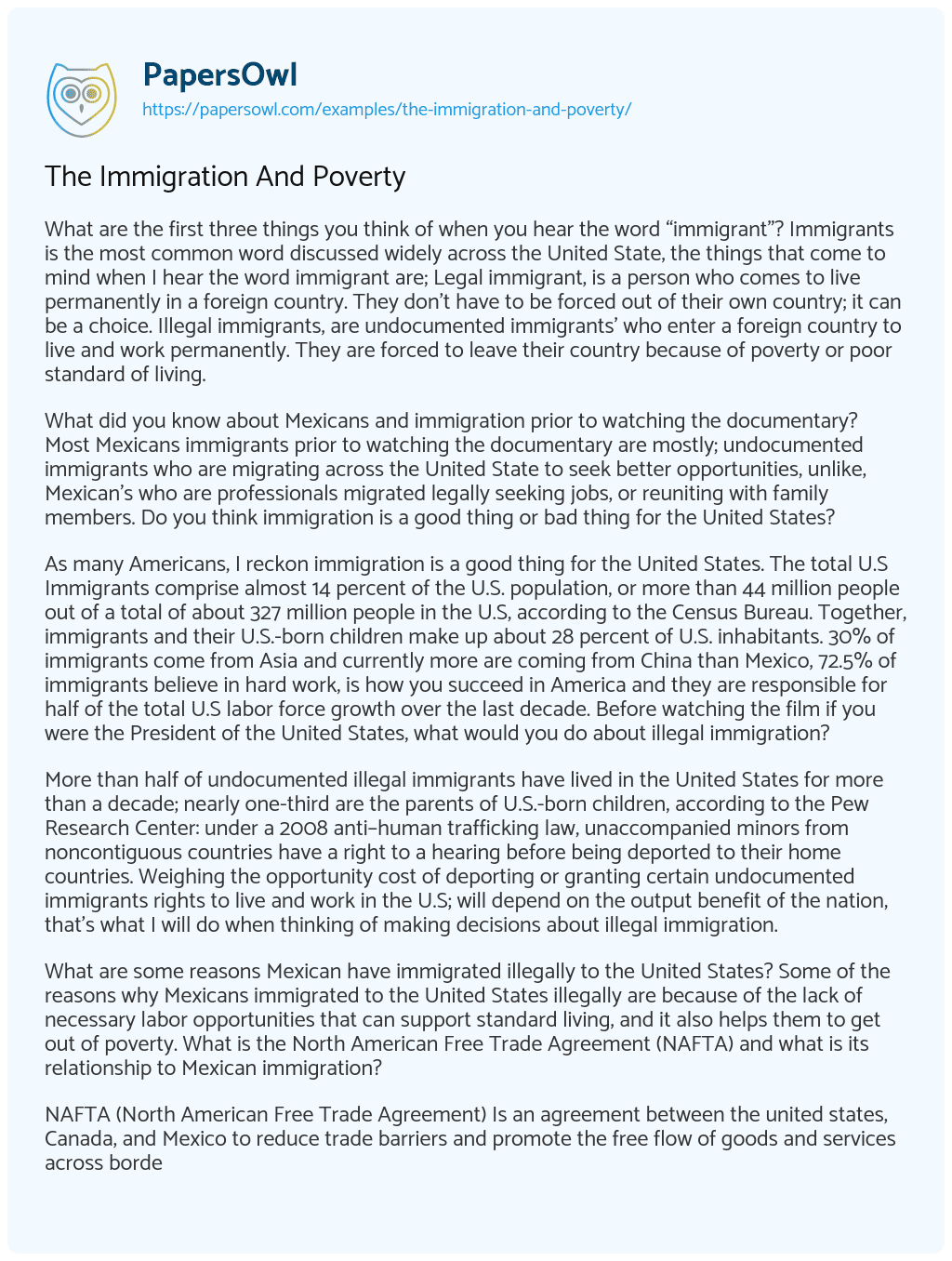 What are the first three things you think of when you hear the word “immigrant”? Immigrants is the most common word discussed widely across the United State, the things that come to mind when I hear the word immigrant are; Legal immigrant, is a person who comes to live permanently in a foreign country. They don’t have to be forced out of their own country; it can be a choice. Illegal immigrants, are undocumented immigrants’ who enter a foreign country to live and work permanently. They are forced to leave their country because of poverty or poor standard of living.

What did you know about Mexicans and immigration prior to watching the documentary? Most Mexicans immigrants prior to watching the documentary are mostly; undocumented immigrants who are migrating across the United State to seek better opportunities, unlike, Mexican’s who are professionals migrated legally seeking jobs, or reuniting with family members. Do you think immigration is a good thing or bad thing for the United States?

As many Americans, I reckon immigration is a good thing for the United States. The total U.S Immigrants comprise almost 14 percent of the U.S. population, or more than 44 million people out of a total of about 327 million people in the U.S, according to the Census Bureau. Together, immigrants and their U.S.-born children make up about 28 percent of U.S. inhabitants. 30% of immigrants come from Asia and currently more are coming from China than Mexico, 72.5% of immigrants believe in hard work, is how you succeed in America and they are responsible for half of the total U.S labor force growth over the last decade. Before watching the film if you were the President of the United States, what would you do about illegal immigration?

More than half of undocumented illegal immigrants have lived in the United States for more than a decade; nearly one-third are the parents of U.S.-born children, according to the Pew Research Center: under a 2008 anti–human trafficking law, unaccompanied minors from noncontiguous countries have a right to a hearing before being deported to their home countries. Weighing the opportunity cost of deporting or granting certain undocumented immigrants rights to live and work in the U.S; will depend on the output benefit of the nation, that’s what I will do when thinking of making decisions about illegal immigration.

What are some reasons Mexican have immigrated illegally to the United States? Some of the reasons why Mexicans immigrated to the United States illegally are because of the lack of necessary labor opportunities that can support standard living, and it also helps them to get out of poverty. What is the North American Free Trade Agreement (NAFTA) and what is its relationship to Mexican immigration?

NAFTA (North American Free Trade Agreement) Is an agreement between the united states, Canada, and Mexico to reduce trade barriers and promote the free flow of goods and services across borders. The free trade brought high quality and cheaper goods than the Rural Mexican farmer produces. This causes unemployment, and poverty among the Rural people in small towns like Pajacuaran, and Huandacareo of the Northern Mexico to immigrate to the United State.

What is the impact of remittances (money immigrants send home) in rural Mexico? Remittance are not just more than a gift from a family member to another family member. They are filling a significant welfare gap and playing an important role both socially, politically, and economically. The impact of remittance sent to Rural Mexico, based on statistics from the movie Title “the other side of immigration” says at least $25 Billion was sent to Mexico, these remittances impacted the way of life of the people. From Urban infrastructure, paved streets and condition of local schools, hospitals, and also taking care of family members.

How does migration affect families in rural Mexico? The necessity of the circumstances of migration affected families in rural Mexico by separating them from their loved ones. Do you think the benefits of remittances outweigh the costs of family separation? Whether the benefits of remittances outweigh the cost of family separation depends on the choice of the individual, some see it as a necessary evil, to be separated from their loved ones so that they can help other family members get out of poverty.

The Immigration And Poverty. (2022, Feb 13). Retrieved from https://papersowl.com/examples/the-immigration-and-poverty/