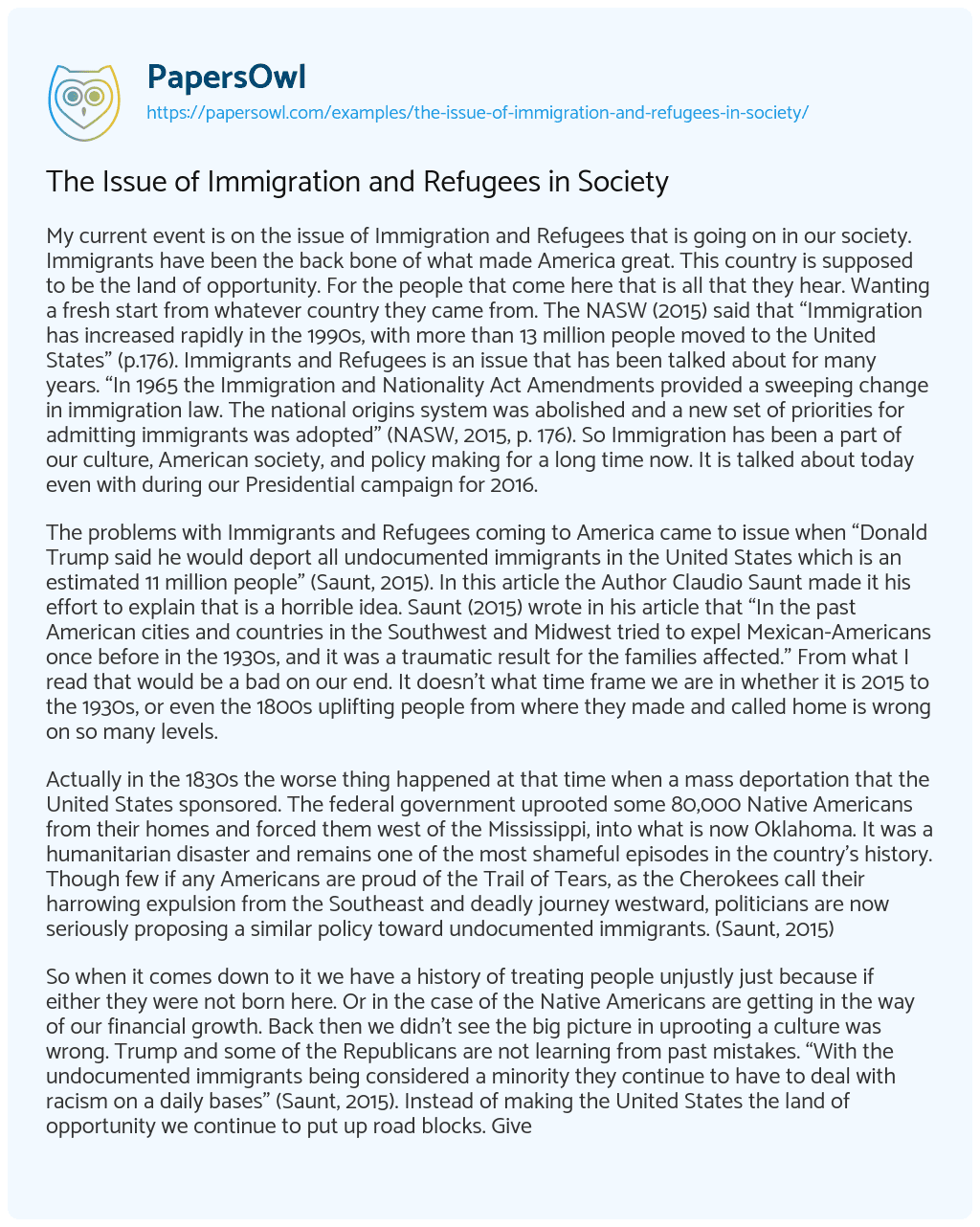 My current event is on the issue of Immigration and Refugees that is going on in our society. Immigrants have been the back bone of what made America great. This country is supposed to be the land of opportunity. For the people that come here that is all that they hear. Wanting a fresh start from whatever country they came from. The NASW (2015) said that “Immigration has increased rapidly in the 1990s, with more than 13 million people moved to the United States” (p.176). Immigrants and Refugees is an issue that has been talked about for many years. “In 1965 the Immigration and Nationality Act Amendments provided a sweeping change in immigration law. The national origins system was abolished and a new set of priorities for admitting immigrants was adopted” (NASW, 2015, p. 176). So Immigration has been a part of our culture, American society, and policy making for a long time now. It is talked about today even with during our Presidential campaign for 2016.

The problems with Immigrants and Refugees coming to America came to issue when “Donald Trump said he would deport all undocumented immigrants in the United States which is an estimated 11 million people” (Saunt, 2015). In this article the Author Claudio Saunt made it his effort to explain that is a horrible idea. Saunt (2015) wrote in his article that “In the past American cities and countries in the Southwest and Midwest tried to expel Mexican-Americans once before in the 1930s, and it was a traumatic result for the families affected.” From what I read that would be a bad on our end. It doesn’t what time frame we are in whether it is 2015 to the 1930s, or even the 1800s uplifting people from where they made and called home is wrong on so many levels.

Actually in the 1830s the worse thing happened at that time when a mass deportation that the United States sponsored. The federal government uprooted some 80,000 Native Americans from their homes and forced them west of the Mississippi, into what is now Oklahoma. It was a humanitarian disaster and remains one of the most shameful episodes in the country’s history. Though few if any Americans are proud of the Trail of Tears, as the Cherokees call their harrowing expulsion from the Southeast and deadly journey westward, politicians are now seriously proposing a similar policy toward undocumented immigrants. (Saunt, 2015)

So when it comes down to it we have a history of treating people unjustly just because if either they were not born here. Or in the case of the Native Americans are getting in the way of our financial growth. Back then we didn’t see the big picture in uprooting a culture was wrong. Trump and some of the Republicans are not learning from past mistakes. “With the undocumented immigrants being considered a minority they continue to have to deal with racism on a daily bases” (Saunt, 2015). Instead of making the United States the land of opportunity we continue to put up road blocks. Give families a hard time to survive in our society, and have unjust laws that no racial or ethnic group should have to go through.

State governments have passed laws to drive out undocumented immigrants. They find themselves living in similarly nebulous conditions, subject to unchecked administrative rulings and often left in jail without judicial recourse. They face state deportation back in the 1830s the United States oversaw the forced emigration of about 0.6 percent of population within its borders. As a proportion of the current U.S. population, Donald Trump proposes to deport six times as many individuals. (Saunt, 2015) With that being said we will continue to more damage, but on an even bigger scale than last time. People need to wake up, and understand this is not the right way. Instead of forcing people out give them a better chance, and help better themselves in our country where as the previous one didn’t.

When it comes down to advocating, and standing by acts or reforms that would benefit Immigrant and Refugees Social Workers have been leading the charge for it. Everyone has the right to leave any country including his or her own, and to return to his country. Social Workers capacity to assist clients is constrained by immigration policies especially ones that limit family visitation. They understand the dynamics of migration and the interface between immigration and immigrant policies. (NASW, 2015, p. 178) Social Workers make it their mission to help all people, and especially even if they are from another country. Time and time again there are road blocks put up so they can’t better help their clients as best as they can.

The NASW supports federal, state, and local policies and procedures that uphold and support equity and human rights for immigrants and refugees, while at the same time protecting national security. They ensure due process for all individual including immigrants. Support restoration of federal and state entitlement for legal immigrants. (NASW, 2015, p. 179) The NASW are pushing for new policies to so that Immigrants and Refugees can have a better life here in the U.S.

Even though it is challenging they continue to work towards a fair and just immigration and Refugee policies. Social Workers promote greater education and awareness of the dynamics of global migration and of the impact of U.S. and other countries’ immigration and foreign policies on human well-being and world peace and stability (NASW, 2015, 180). There are people like Social Workers that are making an effort to make this place home for all people. Congress really needs to consider how they treat people that want, and are willing to come to this country. If people come in droves that means we are doing something. We say we are the greatest country on Earth well we need to act like it then.

The Issue of Immigration and Refugees in Society. (2021, May 24). Retrieved from https://papersowl.com/examples/the-issue-of-immigration-and-refugees-in-society/

Illegal Immigration and its Effects on Society