The Guilt of Leaving Family 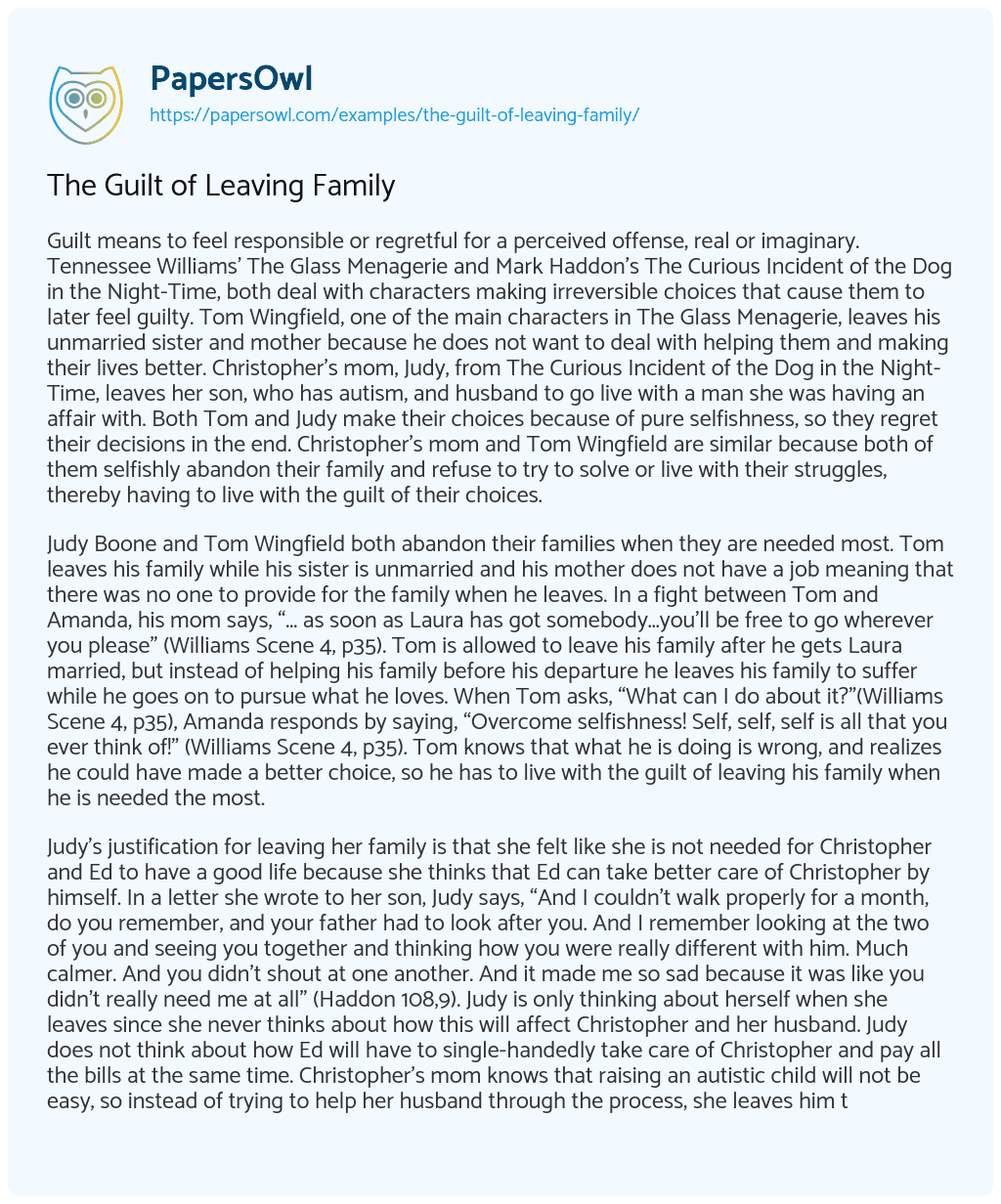 Guilt means to feel responsible or regretful for a perceived offense, real or imaginary. Tennessee Williams’ The Glass Menagerie and Mark Haddon’s The Curious Incident of the Dog in the Night-Time, both deal with characters making irreversible choices that cause them to later feel guilty. Tom Wingfield, one of the main characters in The Glass Menagerie, leaves his unmarried sister and mother because he does not want to deal with helping them and making their lives better. Christopher’s mom, Judy, from The Curious Incident of the Dog in the Night-Time, leaves her son, who has autism, and husband to go live with a man she was having an affair with. Both Tom and Judy make their choices because of pure selfishness, so they regret their decisions in the end. Christopher’s mom and Tom Wingfield are similar because both of them selfishly abandon their family and refuse to try to solve or live with their struggles, thereby having to live with the guilt of their choices.

Judy Boone and Tom Wingfield both abandon their families when they are needed most. Tom leaves his family while his sister is unmarried and his mother does not have a job meaning that there was no one to provide for the family when he leaves. In a fight between Tom and Amanda, his mom says, “… as soon as Laura has got somebody…you’ll be free to go wherever you please” (Williams Scene 4, p35). Tom is allowed to leave his family after he gets Laura married, but instead of helping his family before his departure he leaves his family to suffer while he goes on to pursue what he loves. When Tom asks, “What can I do about it?”(Williams Scene 4, p35), Amanda responds by saying, “Overcome selfishness! Self, self, self is all that you ever think of!” (Williams Scene 4, p35). Tom knows that what he is doing is wrong, and realizes he could have made a better choice, so he has to live with the guilt of leaving his family when he is needed the most.

Judy’s justification for leaving her family is that she felt like she is not needed for Christopher and Ed to have a good life because she thinks that Ed can take better care of Christopher by himself. In a letter she wrote to her son, Judy says, “And I couldn’t walk properly for a month, do you remember, and your father had to look after you. And I remember looking at the two of you and seeing you together and thinking how you were really different with him. Much calmer. And you didn’t shout at one another. And it made me so sad because it was like you didn’t really need me at all” (Haddon 108,9). Judy is only thinking about herself when she leaves since she never thinks about how this will affect Christopher and her husband. Judy does not think about how Ed will have to single-handedly take care of Christopher and pay all the bills at the same time. Christopher’s mom knows that raising an autistic child will not be easy, so instead of trying to help her husband through the process, she leaves him to struggle by himself and started a new life for herself. She still remembers some stuff about Christopher when he shows up in London, but she also forgets some of the most important things about him like how he did not like to be hugged or touched. Forgetting important characteristics about your child implies you don’t love them or you don’t want to get involved in their life. Although this is not the case with Christopher’s mom, Judy made selfish choices at the time and suffered the consequences by having to live with that guilt.

Tom Wingfield and Judy Boone do not attempt to solve their problems nor do they try living with their problems, causing them to regret the decisions they made. As Judy gets closer to Robert Scheer, she starts getting the notion that she needs a change in her life and that Christopher is partly the reason why she wants a change. In a letter she writes to Christopher, Judy says, “I was not a very good mother, Christopher. Maybe if things had been different, maybe if you’d been different, I might have been better at it. But that’s just the way things turned out.” (Haddon 106). Judy indirectly implies that Christopher being autistic is a problem for her because she thinks that the reason she is a bad mother is that she can’t deal with an autistic child. In all the letters she writes to her son, Judy never talks about attempting to change her parenting style or trying to forget the struggles she was having with trying to understand her son’s problems. Judy only talks about how the problems were too much for her to deal with and made it so that she had no choice but to leave her family in order to feel better and not feel like a screw-up. Since she never tries to live with her problems, the end result is that Judy feels regret for the choices she makes.

Tom wants to have new experiences, go on adventures, and have excitement in his life, which in his opinion is the opposite of what he gets by working at a warehouse and living with his family. Tom thinks that his life is like a prison and wants so badly to escape from his current life. Instead of changing his current life to be sufficient for him, he thinks the only solution is to leave and start a new life away from his family. Tom’s reasoning for going to the movies very often is, “I go to the movies because—I like adventure. Adventure is something I don’t have much of at work, so I go to the movies” (Williams Scene 4, p33). The movies provided Tom with an experience of the life he desired for. The movies made him think that the only way to achieve a life of adventure and excitement is to leave his problems or in his case the people who were supposedly stopping him from being able to experience the life he wanted. Tom makes his choices based on what he learns from the movies, which never mention having the feeling of guilt from leaving. Since Tom’s choices are made based on his own desires, instead of thinking about the people his choices will affect, he is left to live feeling guilty for his impulsive decisions.

In conclusion, similarities between Tom Wingfield and Christopher’s mom are shown through their decision to selfishly leave their families during hardships, and their refusal to solve or live with the struggles they faced in their lives, ultimately leading them to live with the guilt of their decisions.

The Guilt of Leaving Family. (2020, Dec 15). Retrieved from https://papersowl.com/examples/the-guilt-of-leaving-family/

The Theme of Guilt in the Rime of the Ancient Mariner

Family Dysfunction in the Glass Menagerie