The Evolution of Soccer 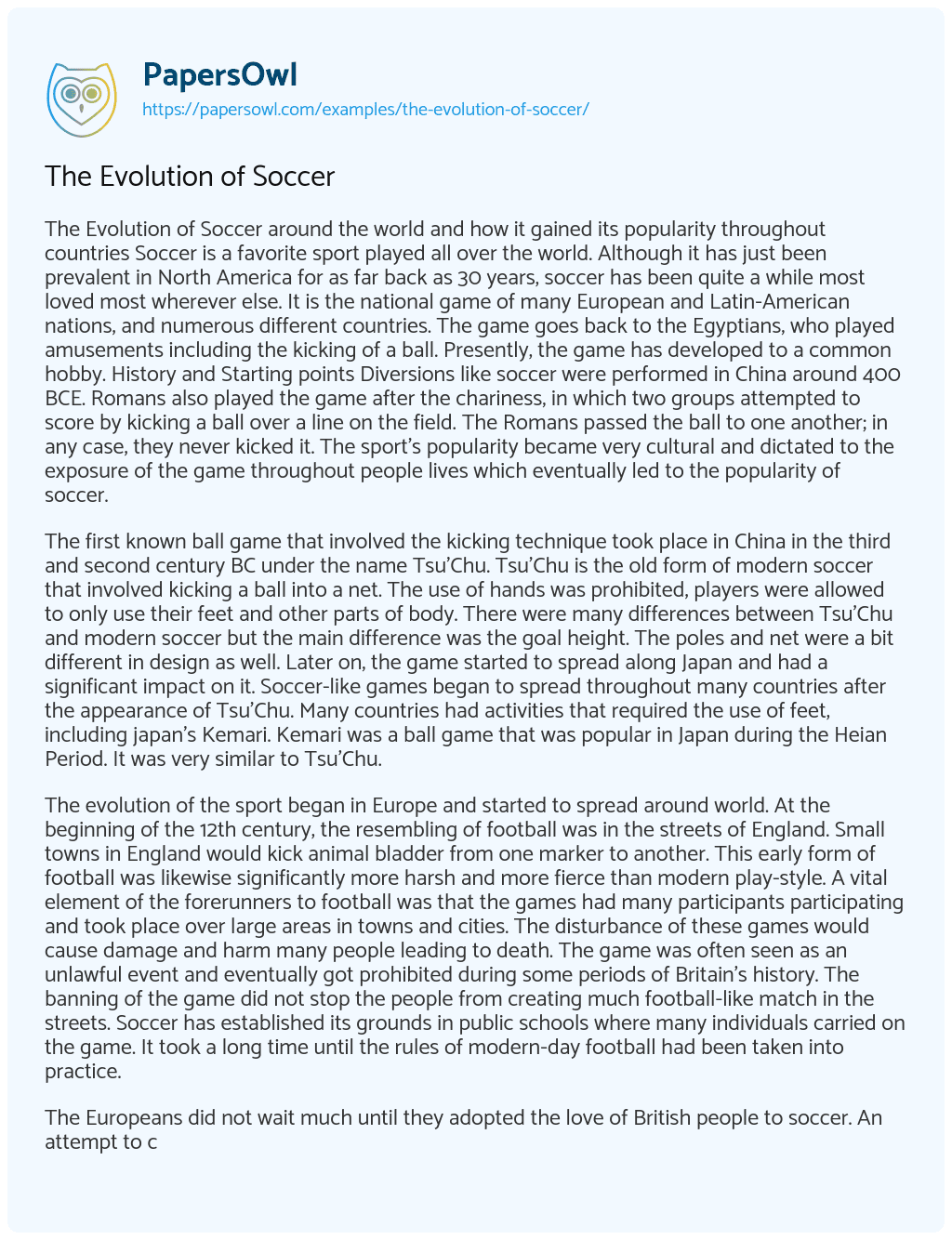 The Evolution of Soccer around the world and how it gained its popularity throughout countries Soccer is a favorite sport played all over the world. Although it has just been prevalent in North America for as far back as 30 years, soccer has been quite a while most loved most wherever else. It is the national game of many European and Latin-American nations, and numerous different countries. The game goes back to the Egyptians, who played amusements including the kicking of a ball. Presently, the game has developed to a common hobby. History and Starting points Diversions like soccer were performed in China around 400 BCE. Romans also played the game after the chariness, in which two groups attempted to score by kicking a ball over a line on the field. The Romans passed the ball to one another; in any case, they never kicked it. The sport’s popularity became very cultural and dictated to the exposure of the game throughout people lives which eventually led to the popularity of soccer.

The first known ball game that involved the kicking technique took place in China in the third and second century BC under the name Tsu’Chu. Tsu’Chu is the old form of modern soccer that involved kicking a ball into a net. The use of hands was prohibited, players were allowed to only use their feet and other parts of body. There were many differences between Tsu’Chu and modern soccer but the main difference was the goal height. The poles and net were a bit different in design as well. Later on, the game started to spread along Japan and had a significant impact on it. Soccer-like games began to spread throughout many countries after the appearance of Tsu’Chu. Many countries had activities that required the use of feet, including japan’s Kemari. Kemari was a ball game that was popular in Japan during the Heian Period. It was very similar to Tsu’Chu.

The evolution of the sport began in Europe and started to spread around world. At the beginning of the 12th century, the resembling of football was in the streets of England. Small towns in England would kick animal bladder from one marker to another. This early form of football was likewise significantly more harsh and more fierce than modern play-style. A vital element of the forerunners to football was that the games had many participants participating and took place over large areas in towns and cities. The disturbance of these games would cause damage and harm many people leading to death. The game was often seen as an unlawful event and eventually got prohibited during some periods of Britain’s history. The banning of the game did not stop the people from creating much football-like match in the streets. Soccer has established its grounds in public schools where many individuals carried on the game. It took a long time until the rules of modern-day football had been taken into practice.

The Europeans did not wait much until they adopted the love of British people to soccer. An attempt to create new guidelines for the game was made at a gathering in Cambridge in 1848, yet the last answer for a few inquiries of standards was not accomplished. After that, the Football Association was formed in 1863. The Football Association made the previous decision in prohibiting the use of the hand in the sport. The size and weight of the ball were standardized, as well. In the late 19th century, the existence of a few teams took place. Britain and Scotland had the primary dynamic groups that played games against one another during the 1870s. Though the game began as a lower-class sport, its official presence in the nation was within the wealthy individuals, through its play in English schools.
The establishment of the foundation of the International Football Association Board (IFAB) was essential in the advancement and improvements of the sport. The International Football Association was set up to bind together and control the laws of the game. The popularity and the beauty of Football started to grow outside of the English borders. In 1904, many countries met including Belgium, Denmark, France, the Netherlands, Spain, Sweden, and Switzerland to create Federation Internationale de Football Association (FIFA).
The 1920s are prominently known as the brilliant time ever of soccer in the U.S. The foundation of American Soccer League in 1921 was a great way to compete with European players. In 1930, the US took part in the primary World Cup in Uruguay. Some incredibly talented athletes were Patenaude and Billy Gonsalves who preformed extremely well in the world cup. Throughout the 1950’s, the American National team returned to the World Cup with a great victory over England. After many years, the United States National team got eliminated from the world cup which showed a significant downfall for soccer in the U.S. The 1994 World Cup is considered the most significant moment in the history of American soccer.

The low popularity of soccer in the United States dates back to the disconnect between soccer and the American fans. In the late 19th century baseball became America’s top sport not because the game was any better than others, but because it successfully adapted to the cultural changes going on in the country. Coming out of the Civil War and going into the industrial revolution baseball brought together north and south, rural and urban and even black and white. The cultural connect in Europe with soccer is extremely high. Starting in the European Championships,The Federation Internationale de Football Association the Respect Campaign. The Respect campaign is made to increase respect between players and supporters of all races, and beliefs. It also makes players respect the beauty of the sport and its culture.
Today, it’s not simply the sport of soccer, that is shielding it from being immensely prominent in the U.S. The reality with three noteworthy games associations from multiple points of view request past simply the American gathering of people, there is no room or money for soccer. Also the cultural distinction played a huge role in the growing of soccer in the United States.

The Evolution of Soccer. (2020, Mar 31). Retrieved from https://papersowl.com/examples/the-evolution-of-soccer/

About Motion of Soccer Ball