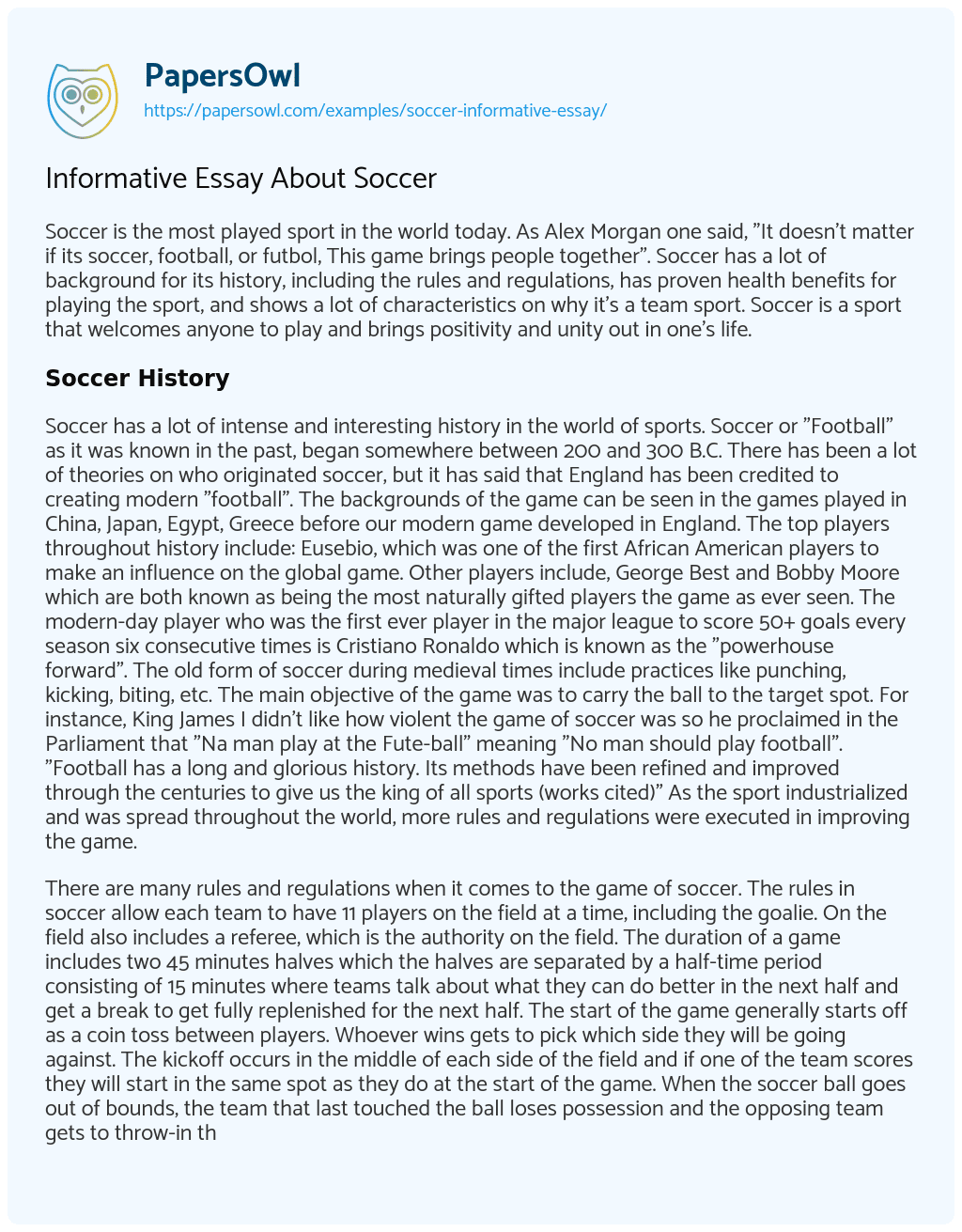 Soccer is the most played sport in the world today. As Alex Morgan one said, “It doesn’t matter if its soccer, football, or futbol, This game brings people together”. Soccer has a lot of background for its history, including the rules and regulations, has proven health benefits for playing the sport, and shows a lot of characteristics on why it’s a team sport. Soccer is a sport that welcomes anyone to play and brings positivity and unity out in one’s life.

Soccer has a lot of intense and interesting history in the world of sports. Soccer or “Football” as it was known in the past, began somewhere between 200 and 300 B.C. There has been a lot of theories on who originated soccer, but it has said that England has been credited to creating modern “football”. The backgrounds of the game can be seen in the games played in China, Japan, Egypt, Greece before our modern game developed in England. The top players throughout history include: Eusebio, which was one of the first African American players to make an influence on the global game. Other players include, George Best and Bobby Moore which are both known as being the most naturally gifted players the game as ever seen. The modern-day player who was the first ever player in the major league to score 50+ goals every season six consecutive times is Cristiano Ronaldo which is known as the “powerhouse forward”. The old form of soccer during medieval times include practices like punching, kicking, biting, etc. The main objective of the game was to carry the ball to the target spot. For instance, King James I didn’t like how violent the game of soccer was so he proclaimed in the Parliament that “Na man play at the Fute-ball” meaning “No man should play football”. “Football has a long and glorious history. Its methods have been refined and improved through the centuries to give us the king of all sports (works cited)” As the sport industrialized and was spread throughout the world, more rules and regulations were executed in improving the game.

There are many rules and regulations when it comes to the game of soccer. The rules in soccer allow each team to have 11 players on the field at a time, including the goalie. On the field also includes a referee, which is the authority on the field. The duration of a game includes two 45 minutes halves which the halves are separated by a half-time period consisting of 15 minutes where teams talk about what they can do better in the next half and get a break to get fully replenished for the next half. The start of the game generally starts off as a coin toss between players. Whoever wins gets to pick which side they will be going against. The kickoff occurs in the middle of each side of the field and if one of the team scores they will start in the same spot as they do at the start of the game. When the soccer ball goes out of bounds, the team that last touched the ball loses possession and the opposing team gets to throw-in the ball from where it went out of bounds. “A corner kick is awarded to the offensive team when the defensive team plays the ball out of bounds over its goal line. The ball is placed within the corner area and is kicked back into play by the offensive team. Players can score directly off the corner kick (works cited)”.

What is a Free Kick?

A direct free kick can be awarded by the referee’s discretion if an opponent pushes, strikes, hits, punches, holds another player or if the player touches the ball with their hands. Also, the referee has the power to give out any red or yellow cards depending on what action was taken by the player. For example, if a player has unsporting behavior they will most likely get a yellow card but if they have a serious foul play they will most likely get a red card. Johan Cruyff once said “Soccer is simple, but it is difficult to play simple” As there are a lot of rules and regulations when it comes to the game of soccer, there are a lot of health benefits that come along with playing the game of soccer.

There are many health benefits when it comes to playing soccer. As players put in so many hours a week with countless amounts of practice and games it increases muscle and strength as a result of the changes between walking, running, and sporting that revolves around soccer. “As play during soccer is continuous, soccer is great for fitness and cardiovascular health (works cited)”. Soccer offers a chance for players to improve their speed and agility, strength, balance, and enhances flexibility. An average player, depending on what position they play, run seven miles per game. The constant running, walking and jogging help keep the players’ heart rates up. Soccer has proven to reduce anxiety and stress when players get the feeling after winning a match. As soccer has many health benefits, it also shows how players can work as a team to meet a goal.

Soccer shows a lot of characteristics on why it’s a team sport. The ability to work with others to reach a common goal is influential when relating to everyday life. “As a game of beauty, soccer thrives on the unique and unprecedented. It is unsettled. It yearns for the transcendent, but at the same time, recognizes that the transcendent is discovered in this life (works cited)”. Working together as a team can make a difference in motivating players to reach its ultimate goal. Soccer gives players an opportunity to get stronger communication skills and teaches them how to work better as a team when players play as a team. Teams that often end up winning are those that work well together.

Why Soccer is the Sport most Famous

The Evolution of Soccer