About Motion of Soccer Ball 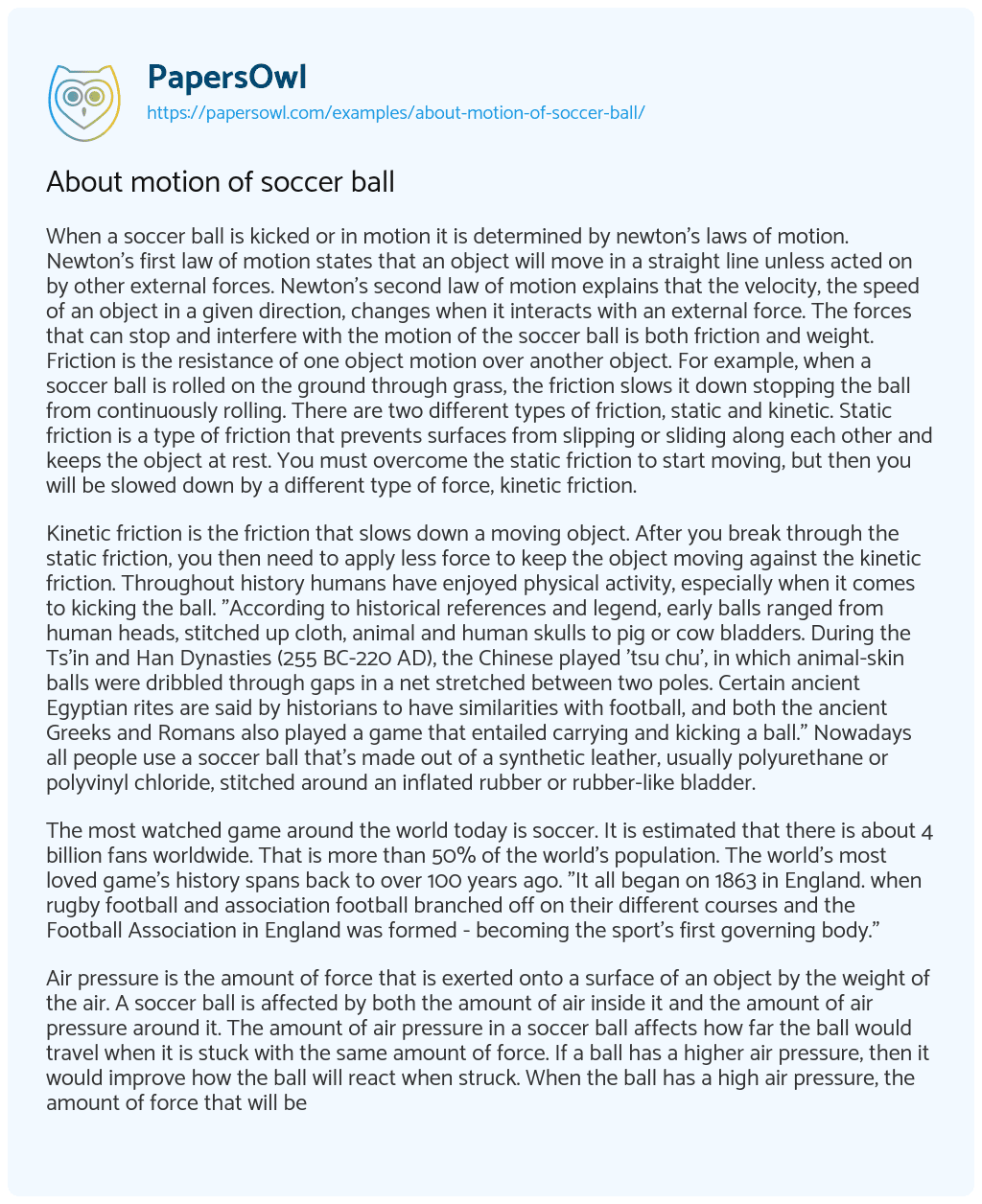 When a soccer ball is kicked or in motion it is determined by newton’s laws of motion. Newton’s first law of motion states that an object will move in a straight line unless acted on by other external forces. Newton’s second law of motion explains that the velocity, the speed of an object in a given direction, changes when it interacts with an external force. The forces that can stop and interfere with the motion of the soccer ball is both friction and weight. Friction is the resistance of one object motion over another object. For example, when a soccer ball is rolled on the ground through grass, the friction slows it down stopping the ball from continuously rolling. There are two different types of friction, static and kinetic. Static friction is a type of friction that prevents surfaces from slipping or sliding along each other and keeps the object at rest. You must overcome the static friction to start moving, but then you will be slowed down by a different type of force, kinetic friction.

Kinetic friction is the friction that slows down a moving object. After you break through the static friction, you then need to apply less force to keep the object moving against the kinetic friction. Throughout history humans have enjoyed physical activity, especially when it comes to kicking the ball. “According to historical references and legend, early balls ranged from human heads, stitched up cloth, animal and human skulls to pig or cow bladders. During the Ts’in and Han Dynasties (255 BC-220 AD), the Chinese played ‘tsu chu’, in which animal-skin balls were dribbled through gaps in a net stretched between two poles. Certain ancient Egyptian rites are said by historians to have similarities with football, and both the ancient Greeks and Romans also played a game that entailed carrying and kicking a ball.” Nowadays all people use a soccer ball that’s made out of a synthetic leather, usually polyurethane or polyvinyl chloride, stitched around an inflated rubber or rubber-like bladder.

The most watched game around the world today is soccer. It is estimated that there is about 4 billion fans worldwide. That is more than 50% of the world’s population. The world’s most loved game’s history spans back to over 100 years ago. “It all began on 1863 in England. when rugby football and association football branched off on their different courses and the Football Association in England was formed – becoming the sport’s first governing body.”

About motion of soccer ball. (2019, Jul 07). Retrieved from https://papersowl.com/examples/about-motion-of-soccer-ball/

Sizes of a Soccer Ball

Why Soccer is the Sport most Famous