The Phenomenon of Black Holes 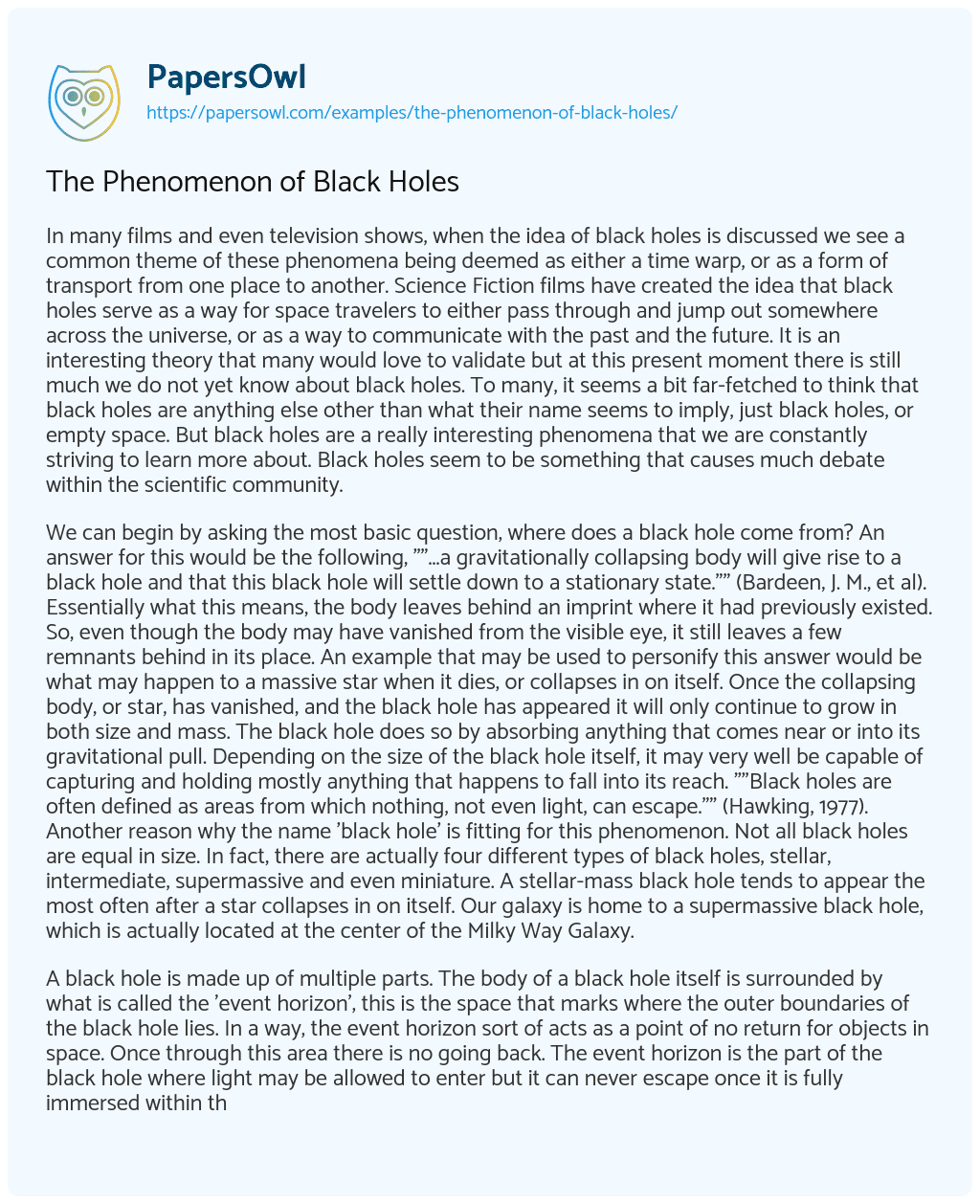 In many films and even television shows, when the idea of black holes is discussed we see a common theme of these phenomena being deemed as either a time warp, or as a form of transport from one place to another. Science Fiction films have created the idea that black holes serve as a way for space travelers to either pass through and jump out somewhere across the universe, or as a way to communicate with the past and the future. It is an interesting theory that many would love to validate but at this present moment there is still much we do not yet know about black holes. To many, it seems a bit far-fetched to think that black holes are anything else other than what their name seems to imply, just black holes, or empty space. But black holes are a really interesting phenomena that we are constantly striving to learn more about. Black holes seem to be something that causes much debate within the scientific community.

We can begin by asking the most basic question, where does a black hole come from? An answer for this would be the following, “”…a gravitationally collapsing body will give rise to a black hole and that this black hole will settle down to a stationary state.”” (Bardeen, J. M., et al). Essentially what this means, the body leaves behind an imprint where it had previously existed. So, even though the body may have vanished from the visible eye, it still leaves a few remnants behind in its place. An example that may be used to personify this answer would be what may happen to a massive star when it dies, or collapses in on itself. Once the collapsing body, or star, has vanished, and the black hole has appeared it will only continue to grow in both size and mass. The black hole does so by absorbing anything that comes near or into its gravitational pull. Depending on the size of the black hole itself, it may very well be capable of capturing and holding mostly anything that happens to fall into its reach. “”Black holes are often defined as areas from which nothing, not even light, can escape.”” (Hawking, 1977). Another reason why the name ‘black hole’ is fitting for this phenomenon. Not all black holes are equal in size. In fact, there are actually four different types of black holes, stellar, intermediate, supermassive and even miniature. A stellar-mass black hole tends to appear the most often after a star collapses in on itself. Our galaxy is home to a supermassive black hole, which is actually located at the center of the Milky Way Galaxy.

If we compare what science and film claim to theorize about black holes it is that the surrounding area of the event horizon is where even time itself seems to slow down. This is possibly due to the shift in the black holes gravitation the closer an object gets to the event horizon. The closer a body gets to a black hole, the stronger its gravitational pull will become until the body gets close enough to be fully absorbed into the black hole itself. This process of time being slowed down is called gravitational time dilation. If we were to observe an object being pulled towards a black hole, we would be able to see the object begin to slow down but we may never see it actually reach into the event horizon. Because time is slowed down, we would not be able to physically see the object reach over into the horizon because the object would become to dimly lit due to the lack of light.

The study of black holes is extremely important because the more we learn about how black holes truly work we can, in theory, learn more about our universe. It may even be possible to gain a better understanding as to how our universe itself came to be. The term itself black hole is initially very misleading, because they are not technically considered to be empty space. On the contrary, they are all filled, sometimes overflowing, with all types of matter. As previously stated, a black hole is continuously absorbing matter from its surroundings and because does not release any of it, it is constantly building up. If we can develop the technology to look into black holes and truly see what happens inside of them, we may be able to provide proof that could only increase our understanding of our solar system. We will be all the better for it if we continue with black hole research and share our knowledge.

The Phenomenon of Black Holes. (2019, Oct 04). Retrieved from https://papersowl.com/examples/the-phenomenon-of-black-holes/

What are Black Holes?

Myths and Folktales about Black Holes

Black Hole: a Black Sphere in the Universe

The Universe of Black Holes